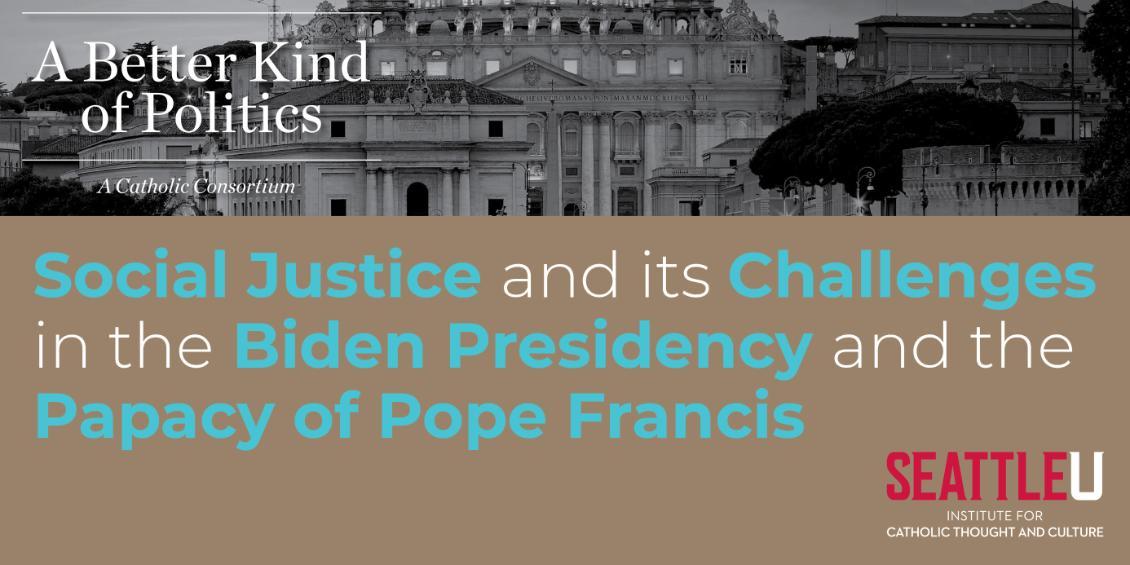 ICTC joins “A Better Kind of Politics,” a consortium of Roman Catholic institutions, in a series of online discussions around topics relating to Pope Francis’ call in Fratelli Tutti for a renewal of politics through social and political charity measured by how we treat our neighbors, especially those “lying wounded along the roadside."

Dr. Connie Anthony and Dr. Patrick Schoettmer from SU's Political Science Department and Dr. Hosffman Ospino from Boston College's School of Theology and Ministry will discuss how, through the lens of social justice, the ideals of the Biden presidency and Pope Francis’ Fratelli Tutti inform and challenge the U.S.’s existing politics, both nationally and internationally, and including immigration policies. Dr. Jeanette Rodriguez, ICTC Director, will moderate the conversation.

Current trends in federal immigration policies have resulted in a crisis of family separation and unaccompanied children being detained on the southern border, increased material and social hardships, and further marginalization of refugees, asylum seekers, and undocumented immigrants living in the United States.

In this national context, the role of local sectors has taken on a heightened importance; local governments, social service agencies, and congregations are often called upon to fill the gaps in services resulting from federal actions. However, when local migration responses are implemented without a collaborative and participatory approach they can exacerbate, rather than ameliorate, the situation.

This presentation describes a case example from the City of Seattle Office of Immigrant & Refugee Affairs (OIRA) that illustrates how collaborative and participatory programming leads to better outcomes and a more socially just context of reception for immigrants and refugees in Seattle. 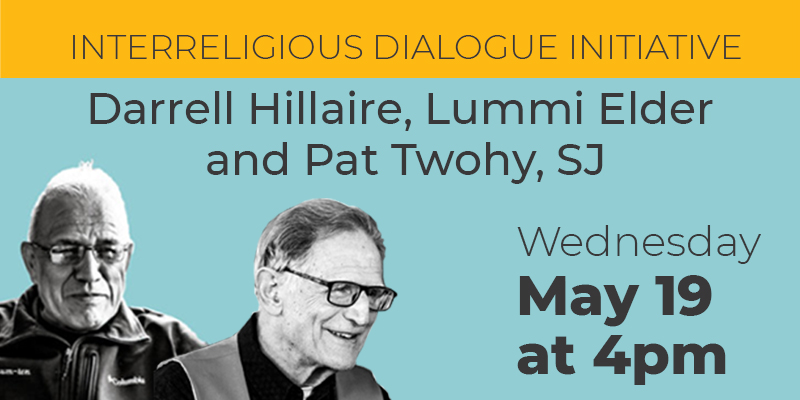 Please join us for this unique opportunity to learn about eco-spirituality from two cherished spiritual leaders. The topic will be twofold: Lummi spirituality in dialogue with Jesuit spiritual practice as well as Lummi reflections on ecology and earth care.

Darrell Hillaire, a highly esteemed leader and the executive director of Tse-sum-ten and Setting Sun Productions, has served as a coach, mentor, teacher, and leader for the Lummi Nation for more than twenty years (read more here). Pat Twohy, SJ is the author of two seminal works, Finding a Way Home and Beginnings: A Meditation on Coast Salish Lifeways. He has lived with and served indigenous peoples of the Northwest for four decades, including eleven years with the Colville Confederated Tribes in Eastern Washington and more recently the Swinomish and Tulalip Tribes of the Coast Salish Peoples.

On the Edges of Catholic Consciousness: Eastern Catholics in the US

Jaisy Joseph, Theology and Religious Studies
Thursday, May 20 at 12:20pm via Zoom

Dr. Joseph's presentation will draw from 22 months of ethnographic research of 3 Eastern Catholic churches in Boston: the Ge'ez Catholics from North Africa, the Melkite Catholics from the Middle East, and the SyroMalabar Catholics from South India. She is exploring what the immigration of these ancient expressions of the Catholic tradition in the past 50 years mean for our understanding of unity-in-diversity in the US Church today.

The Spring 2021 Ann O’Hara Graff Lecture (cosponsored with THRS, in lieu of the CHL lecture) on May 13

Who Is My Neighbor? A lecture and conversation with Professor M. Shawn Copeland

As we peoples of Earth continue to grapple with the lethal coronavirus, we are beset with grave existential, spiritual, and intellectual suffering. Moreover, we in the United States are grappling with waves of white racist supremacy. To answer the question, ‘Who is my neighbor?’ in deeds as well as in words requires that we rethink what it means to be human and what it means to live humanely in a world shaped by legacies of racial domination and oppression.

The ICTC is pleased to co-sponsor this year's Ann O'Hara Graff Lecture, an annual event hosted by the Theology and Religious Studies Department (This lecture will be in lieu of the Spring Catholic Heritage Lecture). An award-winning author, Dr. Copeland has written and/or co-edited six books including her Knowing Christ Crucified: The Witness of African American Religious Experience and Enfleshing Freedom: Body, Race, and Being, and no less than 125 articles, book chapters, reviews, and blog entries on spirituality, theological anthropology, political theology, social suffering, gender and race. She is the recipient of six honorary degrees. Read more about Dr. Copeland here.

BLACK AND AFRICAN-AMERICAN CATHOLICS: Educating and Working for Justice

This presentation promotes the timely relevance of African-American Catholic convert Ellen Tarry (1906-2008) as a teacher/writer/activist who engaged in pre-Civil Rights Movement interracial Catholic Social Action (CST) during the 1930s and 1940s. While working in Harlem with the Russian émigré founder of Friendship House, Catherine de Hueck, and other white advocates, she sustained a fierce faith and devotion while challenging the demoralizing Jim Crow laws and egregious racial injustices perpetrated upon African-Americans. As observed in her memoir—The Third Door: The Autobiography of an American Negro Woman (1955)—Tarry's interracially collaborative social action derived from an understanding that “the deep roots of racism and segregation required more than the passing of new Congressional bills to bring reason and fairness into the attitudes and actions of white[s] . . . toward people of African descent.” For her it required faith-in-action combined with de Hueck’s cultivation of an interracial apostolate at Friendship House that was wholly committed to the truth that Black Lives Matter—then, now, and always, ad infinitum.

Dr. Charisse Cowan Pitre, College of Education:
Black Catholic Educators on Identity, Reconciliation and Teaching for Justice in the Era of the Black Lives Matter Movement

This talk will share findings of a study examining the experiences of Black Catholic educators in the era of the Black Lives Matter Movement. The project presented contributes to the literature on Black Catholic educators and Black/African heritage teachers. African American pedagogical approaches have been documented in the literature as transformative and powerful but remain undertheorized in educational research, policy and practice. Existing literature largely focuses on the recruitment and retention of African heritage educators, emphasizing the importance of reconstructing teacher education in a way that values and affirms their lived experiences, transformation, and wholeness. Through surveys and interviews, this study captures the voices of Black Catholic educators describing their experiences and conceptions of teaching for social justice, including reflections on wholeness of identity, reconciliation, and resistance during this unprecedented time of racial reckoning in the United States.

The Future of Nonviolent Resistance 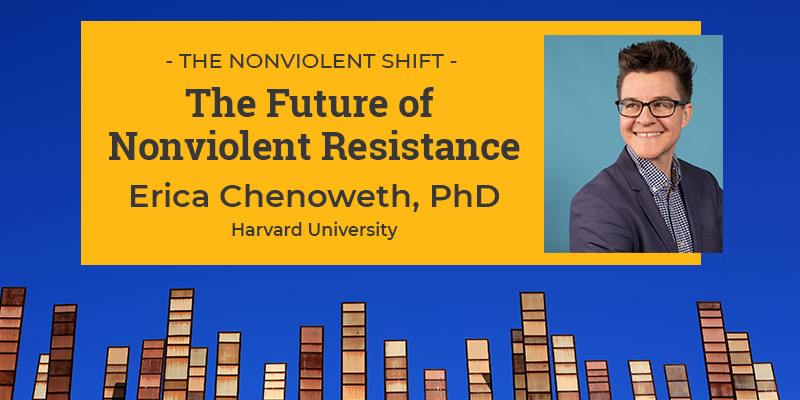 This talk will explore a paradox in the nonviolent resistance movements today: while such movements are now more common than in any other period in recorded human history, they have also been defeated at a higher rate than at any other point in the last 70 years. Dr. Chenoweth will offer several explanations for this seeming paradox and discuss a path forward for nonviolent resistance movements seeking to build their advantage.

Erica Chenoweth, Ph.D. is the Frank Stanton Professor of the First Amendment at Harvard Kennedy School and a Susan S. and Kenneth L. Wallach Professor at the Radcliffe Institute for Advanced Study. Chenoweth directs the Nonviolent Action Lab at Harvard’s Carr Center for Human Rights Policy, where they study political violence and its alternatives. Foreign Policy magazine ranked Chenoweth among the Top 100 Global Thinkers in 2013 for their efforts to promote the empirical study of nonviolent resistance. Learn more about Dr. Chenoweth here. 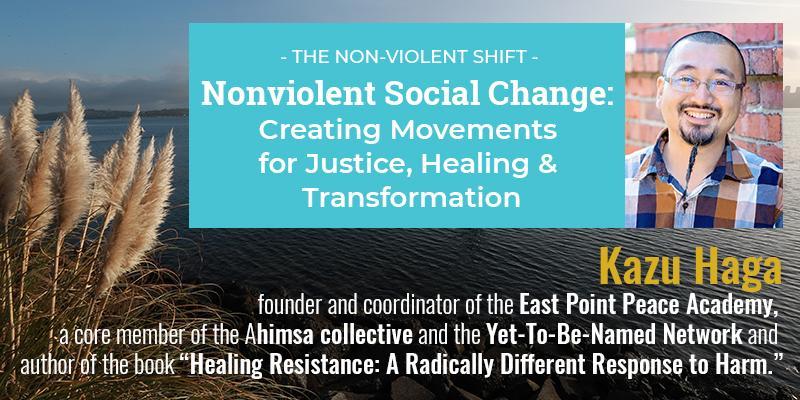 A training for Seattle University Students

Nonviolent action has been proven as the most effective way to create systemic change, and yet the principles and strategies are often times a mystery to many. Join us as we explore some concrete practices and strategies in building nonviolent movements for change.

A training for Seattle University Faculty and Staff

As university faculty and staff, how can you best support students who are working to create change? Learn some of the basics of nonviolent movement strategy so that you can both understand what you may be witnessing on your campus and how best to support it, as well as exploring how to institutionalize nonviolent practices within your department.

Community members: Please email ICTC@seattleu.edu if you are interested in attending a training. You will be notified a week before the training date if there is space available.

Kazu Haga is the founder and coordinator of the East Point Peace Academy, a core member of the Ahimsa collective and the Yet-To-Be-Named Network and author of the book Healing Resistance: A Radically Different Response to Harm. He is an experienced trainer, certified in several methodologies of nonviolence and restorative justice. Having received training from elders including Dr. Bernard Lafayette, Rev. James Lawson and Joanna Macy, he teaches nonviolence, conflict reconciliation, restorative justice, organizing and mindfulness in prisons and jails, high schools and youth groups, and with activist communities around the country.

Kazu was introduced to the work of social change and nonviolence in 1998, when at the age of 17 he participated in the Interfaith Pilgrimage of the Middle Passage; a 6-month walking journey from Massachusetts to New Orleans to retrace the slave trade. He spent a year studying nonviolence and Buddhism while living in monasteries throughout South Asia, and returned to the US at age 19 to begin a lifelong path in social justice work.

He spent 10 years working in social justice philanthropy, while directly being involved in and playing leading roles in many movements. He became an active nonviolence trainer in the global justice movement of the late 1990s, and has since led hundreds of workshops worldwide.

He is the recipient of several awards including the Martin Luther King Jr. award and the Gil Lopez Award for Peacemaking.

Kazu is an avid meditator and enjoys being in nature, particularly with his dog. He is a die-hard fan of the Boston Celtics and of mixed martial arts, the latter of which he is still sometimes conflicted about.

He resides in Oakland, CA.

We the People and the Primacy of Conscience