Under this broad theme we will explore how we might encourage more inter-dependent global partnerships, non-violent processes for dismantling structures and systems that stifle the flourishing of humanity, and spiritual practices to sustain us in the work of justice. We know that we may never see the fruits of our work and so we must create ways to nurture these visions and collaborative commitments for a more humane and just world. 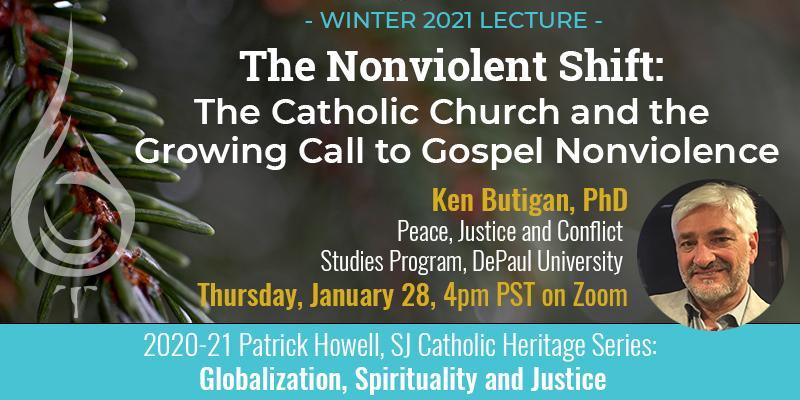 The Nonviolent Shift: The Catholic Church and the Growing Call to Gospel Nonviolence with Dr. Ken Butigan, DePaul University
Thursday, January 28 at 4pm PST via Zoom

RSVP to ICTC@seattleu.edu; access details will be available closer to the event.

Nonviolence is a spiritual journey, a way of life, a method for social change, and a universal ethic. Pope Francis has increasingly called on the Church and the world to embrace Gospel nonviolence in our lives and in the struggle for a more just, peaceful and sustainable world. This presentation will explore how the Church is responding to this call – and how we can all be part of this nonviolent shift.

Ken Butigan, PhD, is a senior lecturer in the Peace, Justice and Conflict Studies Program at DePaul University in Chicago. He has played a pivotal role in movements for social change and has published a series of books on peace and nonviolence, including Nonviolent Lives and From Violence to Wholeness. He serves on the Executive Committee of Pax Christi International’s Catholic Nonviolence Initiative, which has collaborated with the Vatican in co-sponsoring two landmark conferences on nonviolence in Rome. He has also worked for three decades with Pace e Bene Nonviolence Service, which has trained tens of thousands of people in the power of nonviolent change and which organizes Campaign Nonviolence, a long-term, nationwide effort seeking to foster a nonviolent culture of free from war, poverty, racism and environmental destruction. 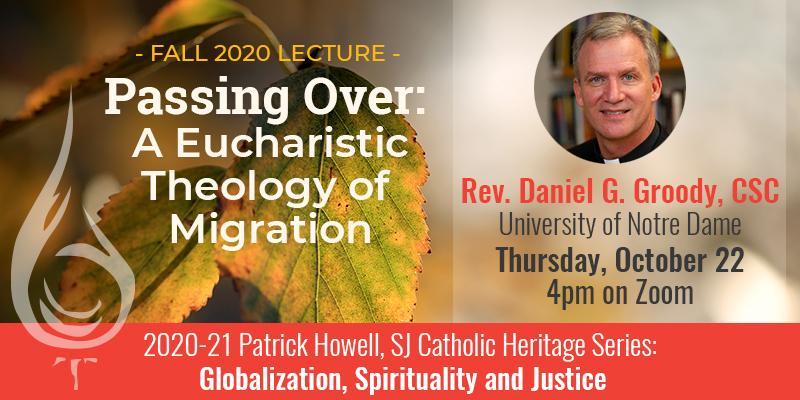 Passing Over: A Eucharistic Theology of Migration with Fr. Dan Groody, University of Notre Dame
Thursday, October 22 at 4pm

This talk will explore the connection between what happens inside churches and what happens outside them, especially in relationship to the meaning of the Eucharist and the challenges of global migration. At a time when more than 80 million people are forcibly displaced, how do we move from a space of otherness to a vision of "oneness" that leads us from alienation to genuine communion?

Rev. Daniel G. Groody is the vice president and associate provost for the University of Notre Dame, where he also serves as a University Fellow and Trustee, and associate professor of theology and global affairs. He is a Kellogg Institute faculty fellow and the director of the Global Leadership Program within the Institute.  He is a Catholic priest, a Holy Cross religious, and an award-winning professor, author, and film producer.

Drawing on years of work on international migration and refugee issues, Groody has authored numerous books and articles, translated into seven languages, which include Globalization, Spirituality, and Justice: Navigating the Path to Peace (Orbis, 2007) and Border of Death, Valley of Life: An Immigrant Journey of Heart and Spirit (Rowman & Littlefield, 2002).

He is also the executive producer of several internationally acclaimed films and documentaries, including One Border, One Body: Immigration and the Eucharist, and Dying to Live: A Migrant's Journey. He teaches the courses “The Heart’s Desire and Social Change,” “Theology of Migration,” and “Christian Faith and Global Justice,” and he lectures widely around the world.

Groody has worked with the US Congress, the US Conference of Catholic Bishops, the World Council of Churches, the Vatican, and the United Nations on issues of theology, globalization, migration, and refugees. In 2007–08 he was a visiting research fellow at Oxford University's Refugee Studies Centre.