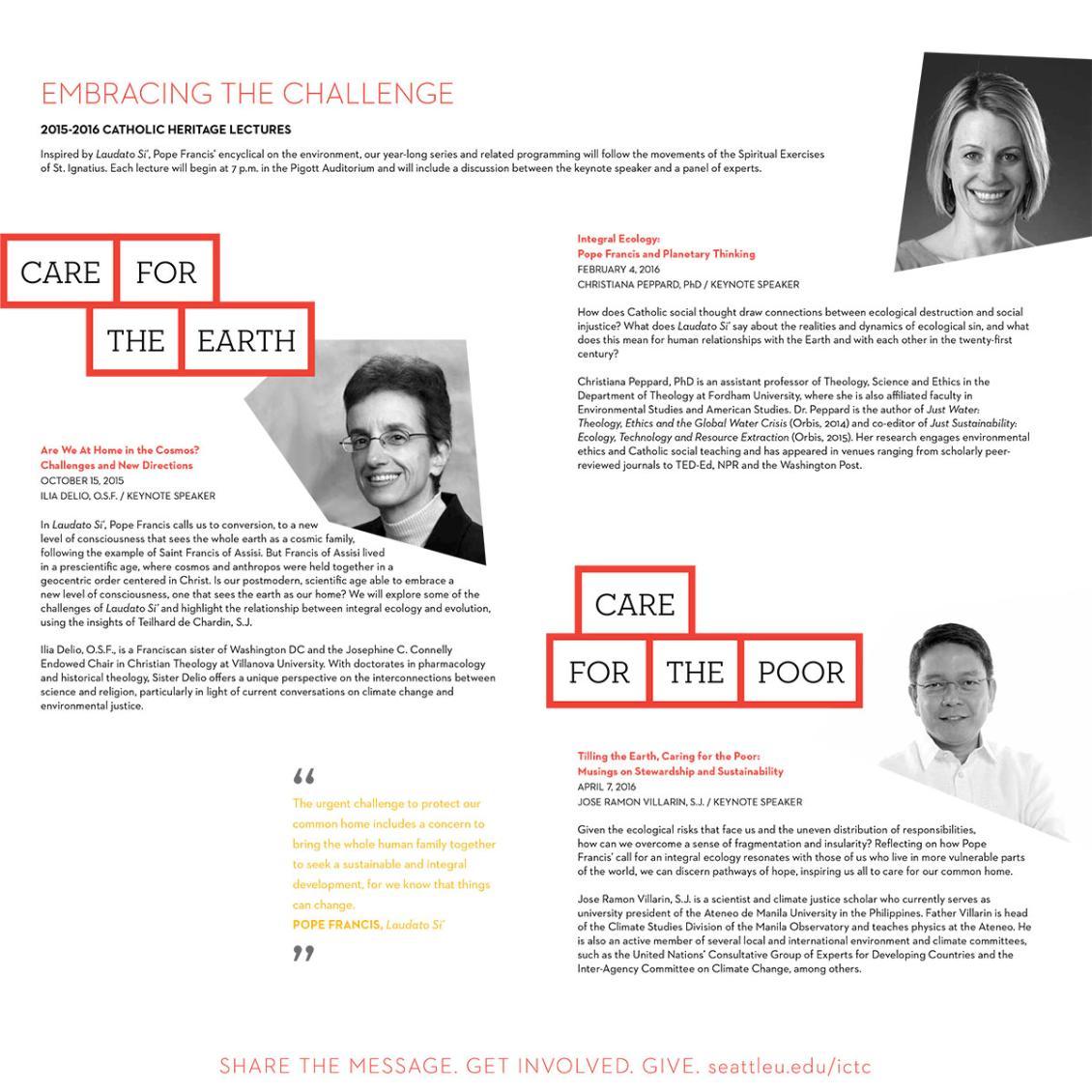 “Tilling the Earth, Caring for the Poor: Musings on Stewardship and Sustainability"

Given the ecological risks that face us and the uneven distribution of responsibilities, how can we overcome a sense of fragmentation and insularity? Reflecting on how Pope Francis’ call for an integral ecology resonates with those of us who live in more vulnerable parts of the world, we can discern pathways of hope, inspiring us all to are for our common home.

Jose Ramon Villarin, SJ is a scientist and climate justice scholar who currently serves as university president of the Ateneo de Manila University in the Philippines.

He ​is ​currently​ the ​chair​person​ of the Manila Observatory, a scientific research institute, and is a technical expert for the Philippine government’s Climate Change Commission. His other responsibilities include being chair of Synergeia, an NGO engaged in public education reform and the Ramon Magsaysay Award Foundation, which recognizes exemplary persons and institutions working for social transformation in Asia. ​

Patty Bowman, Director of Social Outreach, oversees ministries, justice education and advocacy efforts at St. James Cathedral. Patty was an attorney in Seattle for many years an is a graduate of Stanford University and Harvard Law School. She holds masters degrees in Pastoral Studies from Seattle University and in Biblical Studies from the Graduate Theological Union in Berkeley, California.

Jessie Dye, lead program staff for Washington Interfaith Power & Light, has a law degree and has had a long career as a mediator and manager, including 20 years with the Catholic Archdiocese of Seattle. She has also worked with the Seattle Human Rights Department, Washington Arbitration and Mediation Services, and Catholic Community Services.

Christiana Peppard, PhD / KEYNOTE SPEAKER
Christina Roberts & Wesley Lauer / PANELISTS
February 4, 2016
How does Catholic social thought draw connections between ecological destruction and social injustice? What does Laudato Si' say about the realities and dynamics of ecological sin, and what does this mean for human relationships with the Earth and with each other in the twenty-first century?

Christiana Peppard, PhD will deliver the keynote, which will be followed by a panel discussion. Christina Roberts, PhD will examine the rhetoric used to discuss climate change, highlighting voices and perspectives which are often marginalized, and Wesley Lauer, PhD will discuss the health of water systems in Nicaragua as an example of the ways in which water rights, indigenous rights and engineering intersect.

Christiana Peppard, PhD is an assistant professor of Theology, Science and Ethics in the Department of Theology at Fordham University, where she is also affiliated faculty in Environmental Studies and American Studies. Dr. Peppard is the author of Just Water: Theology, Ethics and the Global Water Crisis (Orbis, 2014), and co-editor of Just Sustainability: Ecology, Technology and Resource Extraction (Orbis, 2015). Her research engages environmental ethics and Catholic social teaching and has appeared in venues ranging from scholarly peer-reviewed journals to TED-Ed, NPR and the Washington Post.

Christina Roberts, PhD is a professor of English and Program Director of Women and Gender Studies at Seattle University. Her research areas include early to nineteenth-century American literature, literatures of the American west and frontier, and she has worked with programs that support Native American youth and first-generation college students.

Wesley Lauer, PhD is Director of Environmental Science at Seattle University. Dr. Lauer is a geomorphologist and engineer with experience in water resources engineering. He is currently studying the implications of long-term changes in environmental conditions on river systems.
"Are We at Home in the Cosmos? Challenges and New Directions"
Ilia Delio, OSF / KEYNOTE SPEAKER
Jason Wirth / PANELIST
October 15, 2015
In Laudato Si', Pope Francis calls us to conversion, to a new level of consciousness that sees the whole earth as a cosmic family, following the example of Saint Francis of Assisi. But Francis of Assisi lived in a prescientific age, where cosmos and anthropos were held together in a geocentric order centered in Christ. Is our postmodern, scientific age able to embrace a new level of consciousness, one that sees the earth as our home? We will explore some of the challenges of Laudato si' and highlight the relationship between integral ecology and evolution, using the insights of Teilhard de Chardin, S.J.
Ilia Delio, O.S.F., is a Franciscan sister of Washington DC and the Josephine C. Connelly Endowed Chair in Christian Theology at Villanova University, will explore what it means to be called to care for creation. With doctorates in Pharmacology and Historical Theology, Delio offers a unique perspective on the interconnections between science and religion, particularly in light of current conversations on climate change and environmental justice. Panelists to be announced in late summer.

Jason Wirth, PhD, professor of philosophy at Seattle University, will respond to Sr. Delio’s keynote address, bringing his insights as a priest in the Soto tradition of Zen Buddhism.