The annual Catholic Heritage Lectures, launched in 2010, engage the intellectual and religious communities of the Seattle area and the Seattle University community to explore aspects of the Catholic Intellectual Traditions and the intersection of Catholicism and culture.

The spirit of our God is upon me; anointing me and sending me to bring glad tidings for the poor, to proclaim liberty to captives, recovery of sight to the blind and release to prisoners. To announce a year a favor from our God. -- Luke 4:18

When Jesus spoke these words, he identified himself within the tradition of the great Hebrew prophets whose twofold task was to both denounce (injustice) and to announce (a new way of being in the world). This movement that we trace back to Jesus is echoed throughout the tradition and in the documents of Vatican II as well as other reform movements. All of which speaks to us of new ways of relating, expanding our epistemological postures, and offering new understandings of power. The Catholic Churches’ social justice teachings are rooted in the life of Jesus and in this prophetic tradition of denouncing and announcing.

Under this broad theme we have and will explore how we might encourage more inter-dependent global partnerships, non-violent processes for dismantling structures and systems that stifle the flourishing of humanity, and spiritual practices to sustain us in the work of justice. We know that we may never see the fruits of our work and so we are challenged to create ways to nurture these visions and collaborative commitments for a more humane and just world.

This year ICTC places a special emphasis on three multivalent themes: the retrieval and review of the vision and implications of Vatican II; Synodality, or deep listening; and Women’s ministerial collaboration with the Jesuits and the larger Church.

We begin this exciting programming for the year with Massimo Faggioli, professor in the Department of Theology and Religious Studies at Villanova University. He contends that there is no doubt that the pontificate of Pope Francis leaves no room for doubting the role of Vatican II in his theological identity. Father John O’Malley, a Jesuit and historian of religious culture, contends that the council has inexorably moved from experience, to memory and finally to history, and an important question for the church today is how might we communicate the richness and vision, the challenges, the questions, and the response that emerged and flows out of Vatican II to a new generation of Catholics? 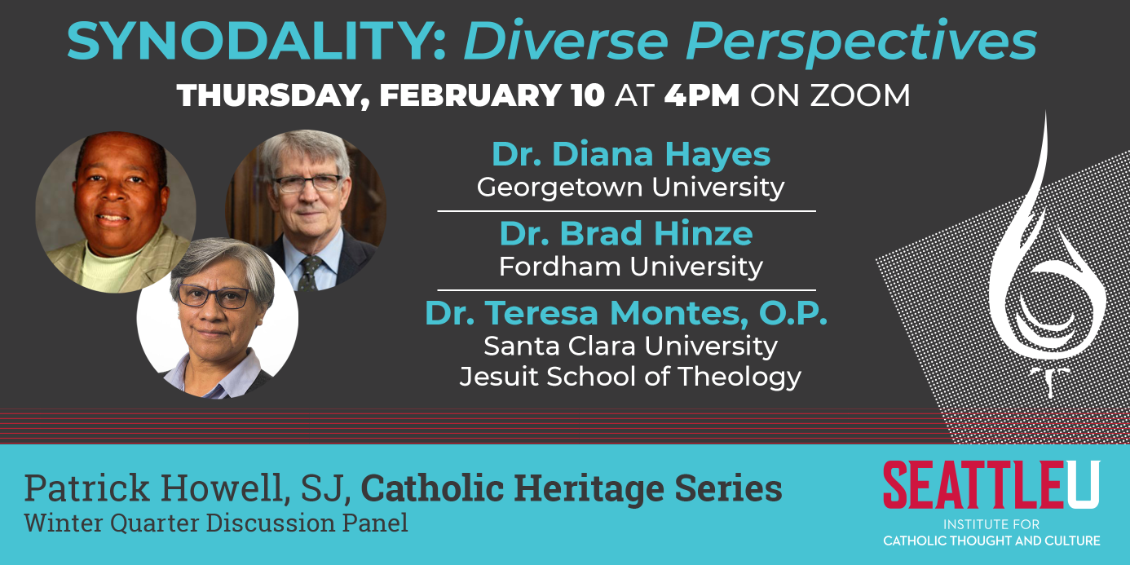 Synodality as a Pathway to Unity, Justice and Inclusion

African Americans have been walking in solidarity since their forced and involuntary arrival in the United States in the 16th century. Understanding synodality as “walking together” is already a critical part of their worldview as expressed in ubuntu. Ubuntu means we are all 1 people, 1 community seeking wholeness in life. “I am because we are” expresses this. We offer this understanding to the Church and invite them to journey with us, to become one people, one community in Christ Jesus.

Diana L. Hayes is a Professor Emerita of Systematic Theology in the Department of Theology at Georgetown. Her areas of specialization are Womanist Theology, Black Theology, U.S.Liberation Theologies, Contextual Theologies, Religion and Public Life, and African American and Womanist Spirituality. Dr. Hayes is the first African American woman to receive the Pontifical Doctor of Sacred Theology degree (S.T.D.) from the Catholic University of Louvain (Belgium) and has also received three honorary doctorates. She is the author of 6 books and over 50 articles.

Dr. Brad Hinze:
Can we find a way together? The Challenge of Synodality for Seekers at the Margins of the Church

What is synodality and why does the Pope want Catholics to practice it? And what can those at Jesuit Universities, especially students at the margins of the Church, contribute to this process?

Brad Hinze is the Karl Rahner, S.J., Professor of Theology at Fordham University in New York.  He has written on synods and synodality, and on Confronting the Church in Controversy, which is the title of his forthcoming book. His question today is what can seekers contribute to the practice of synodality in the church and small communities?

We give thanks and bless our Mother Earth for all the gifts we have received: life, wisdom, brothers and sisters, flora and fauna, water, wind, north and south.  We are asking for peace, our humanity is called to collaborate with every single living creature.  Our faith is challenging the Western way of thinking.  What is the value and view of the indigenous cultures that share the secret of life?  What is the wisdom of our ancestors that invite us to look inside and recognize all creatures of the One Creator and united us with the world and with Spirit of Life?

Maria Teresa Montes Lara, O.P., is the director of the Instituto Hispano. An indigenous Mexican woman from the Mixteca Alta culture in Oaxaca, she is a member of the Dominican Sisters of the Congregation of St. Thomas Aquinas (Tacoma Dominicans). After teaching elementary school in Oaxaca, she worked in parish Hispanic-Latino ministry for twenty years in the Archdiocese of Seattle and was also an instructor for SALT (Scripture and Leadership Training), a certification program for parish leaders through Seattle University. She has a Master of Arts in Pastoral Studies from Aquinas Institute of Theology in St. Louis, an M.Div. from Seattle University School of Theology and Ministry, and recently completed her doctorate, a D.Min. in Hispanic-Latino Theology and Ministry, at Barry University in Miami. 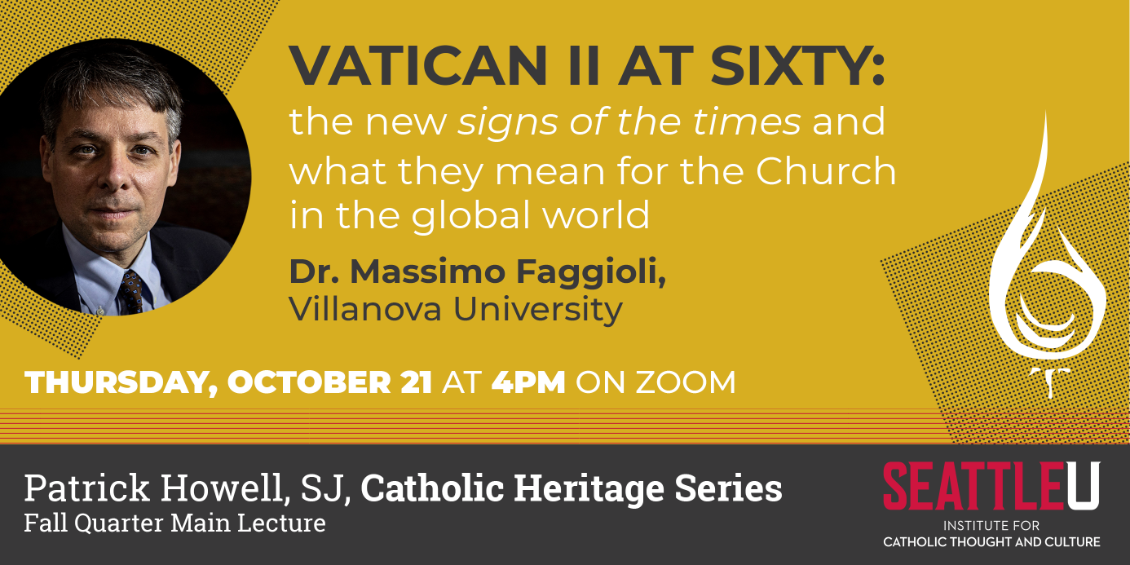 Vatican II at Sixty: The New "Signs of the Times" and what they mean for the Church in the Global World

Vatican II was celebrated almost sixty years ago (1962-1965) and its theology is the compass for the church in our global world. But since the 1960s and the early post-Vatican II period, the world and the church have changes and the signs of the times have changed. The lecture will analyze some of the most consequential changes in the signs of the times and reflect on what they mean for our idea of church and our mission.

Massimo Faggioli, a married lay Roman Catholic, is full professor in the Department of Theology and Religious Studies at Villanova University (Philadelphia). He worked in the “John XXIII Foundation for Religious Studies” in Bologna between 1996 and 2008. He was co-chair of the study group “Vatican II Studies” for the American Academy of Religion between 2012 and 2017. He has a column in La Croix International, and is contributing writer for Commonweal magazine and for the Italian magazine Il Regno. He is co-editor with Bryan Froehle of the new series “Studies in Global Catholicism” for Brill Publishers (first volume scheduled 2021). His books and articles have been published in more than ten languages. His most recent publications include the books: A Council for the Global Church. Receiving Vatican II in History (Fortress, 2015); The Rising Laity. Ecclesial Movements since Vatican II (Paulist, 2016); Catholicism and Citizenship: Political Cultures of the Church in the Twenty-First Century (Liturgical Press 2017); La onda larga del Vaticano II. Por un nuevo posconcilio (Universidad Alberto Hurtado: Santiago de Chile, 2017). His latest books are The Liminal Papacy of Pope Francis. Moving Toward Global Catholicity (Orbis Books, 2020) and Joe Biden and Catholicism in the United States (Bayard 2021). He is co-editing with Catherine Clifford The Oxford Handbook of Vatican II (Oxford University Press, 2022) and he is under contract with Oxford University Press for a book on the history of the Roman Curia. He lives in the Philadelphia area with his wife and their two children. 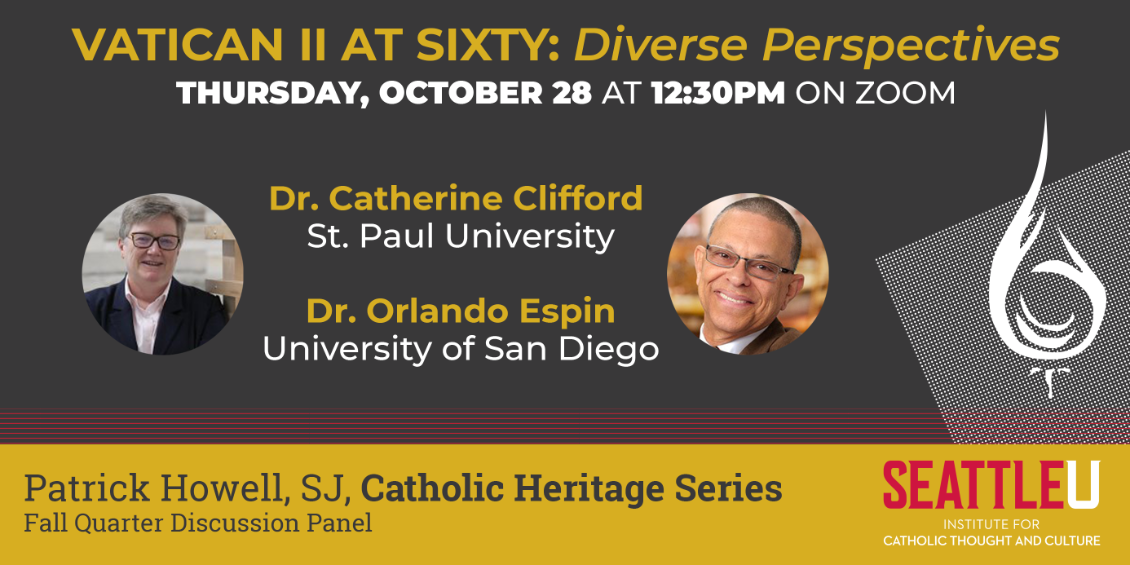 Dr. Clifford and Dr. Espín will speak from their diverse social locations and identify the key items of Vatican II in light of the “signs of the times.”

Catherine E. Clifford is Professor of Systematic and Historical Theology. Her research interests and publications are focussed primarily in the areas of ecclesiology, ecumenism, and the history of the Second Vatican Council, with a particular emphasis on the understanding of conversion and renewal of the churches, the development of doctrines, and the unity and diversity of Christian communions within the world Christian movement. These questions are of great significance given the changing role of the church in contemporary society. Catherine is a dynamic teacher who enjoys engaging with students from diverse horizons. Her courses explore the changing role and methodologies of theology as theologians seek to reflect on contemporary issues in service of church and society.

Orlando O. Espín is Emeritus Professor of theology and religious studies at the University of San Diego, where he taught for three decades. He earned (1984) a dual doctorate in systematic and practical theology at the Catholic University of Rio de Janeiro, Brazil.    One among the handful of theologians who began U.S. Latinoax theology, Espín has specialized in the study of "popular" religions, and in the theological study of culture and traditioning. He is author or editor of twelve books (including his The Faith of the People: Theological Reflections on Popular Catholicism, Idol and Grace: On Traditioning and Subversive Hope, Grace and Humanness: Theological Reflections Because of Culture, and Pentecost at Tepeyac). He edited the comprehensive Wiley-Blackwell Companion to Latino/a/x Theology, and is preparing a much enlarged and updated second edition of the Companion. Espín also co-edited the award-winning Introductory Dictionary of Theology and Religious Studies. He has published over 450 articles in U.S., European and Latin American professional journals, and more than 25 book chapters. He has received several national and international awards, including the Lifetime Achievement Award from La Comunidad of Latinx Scholars in Religion, ACHTUS' Virgilio Elizondo Award, the 2016 John Courtney Murray Award from the Catholic Theological Society of America, an honorary doctorate and an honorary professorship. He was honored in 2001 as one of the “outstanding Catholic theologians in the world" at the start of the third millennium, by Germany's Missio Institute of Missiology "for groundbreaking theoretical work on popular Catholicism."

We are thrilled to announce that the Catholic Heritage Lectures will be re-named the Patrick Howell, S.J. Catholic Heritage Series. This is made possible thanks to the generosity of Timmie Hollomon; this gift will underwrite the Patrick Howell, S.J. Catholic Heritage Series for years to come. Fr. Pat Howell, who passed away last November, was a founder of the Institute for Catholic Thought and Culture. Inspired by the vision of Vatican II, he was passionate about bringing the Catholic intellectual tradition to life. In his own words, “the ICTC’s Catholic Heritage Lectures are committed to providing spaces and conversations where these deeper, soul-searching examinations can occur - with the hope that they open up the ancient places, the foundations of one’s soul, and the delight that one is getting closer to the truth.”