New Provost on Excellence at Seattle U 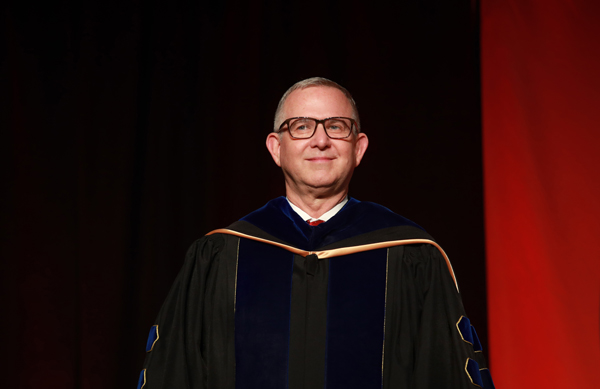 So how exactly do we “do” academic excellence at Seattle U? Have we put our own signature on a nearly 500-year-old Jesuit educational tradition? Provost Martin explains it this way:

“Academic excellence is a commitment to two things: A deep grounding in intellectual and academic rigor in one’s content area so as to develop an expertise. But it’s not enough just to be excellent in one’s area. It’s the proclivity through inclusive leadership to make a difference in the world. So it’s a commitment to intellectual rigor coupled with a social consciousness and the desire to make impactful change for the common good of our society.”

Martin, who took the reins as provost seven months ago, says Seattle U’s commitment to academic excellence is inclusive throughout all programs at the undergraduate, graduate and doctoral levels, and calls out a few things that have particularly impressed him. One of those is the Core Curriculum.

“We’re educating well-rounded undergraduates who can go deep in problem-solving, and who have the interdisciplinary kinds of skills and perspective that I think the challenges of today’s society, and certainly those of the future, require,” he says. “Because of the way our faculty has carefully thought about the core curriculum, we have a broad offering of courses that address issues of critical thinking, problem solving and quantitative literacy, for example, and that utilize real-world case studies and require students to apply their knowledge to contemporary challenges in society. Formulation of ideas and their articulation is paramount across the core curriculum.”

At the master’s and doctoral levels, Martin notes Seattle U’s carefully-selected programs that build on the core strength of its undergraduate programs, leading students deeper into their field of study while preparing them for positions of leadership. Further, he references the number of Seattle U law school graduates who have moved into positions of leadership in the legal community, including judgeships, as symbolic of the university’s whole array of programs.

That said, he sees opportunities for growth and improvement. Because the curriculum at Seattle U is so connected to real world dynamics, it is always being developed, enhanced and improved. It is designed to reflect and to be in dialogue with the signs of the times.

Asked about specific opportunities for improvement, Martin talks about finding ways to grow and enhance the university’s systems, policies and practices so as to bring more intentionality to the work that is done here.

“Part of that is deepening our infrastructure in our Academic Affairs division,” he explains, “the undergirding to support this dynamic academic curriculum.”

Continuing, Martin says, “The Campaign for Seattle University will be of tremendous support in accomplishing this. It will allow us to recruit and retain faculty who are the right fit for this dynamic institution, and to expand our centers and initiatives that build bridges between the university and the community. Most importantly, it will support construction of the new Center for Science and Innovation, which will be a symbol of Seattle U’s Commitment to academic and inclusive excellence and to integrated, holistic curricula. The CSI will help students of all majors deepen the quantitative and information sciences skills that everyone needs to understand our contemporary world and to make themselves competitive.”

Other opportunities for improvement, Martin points out, include identifying ways to be more holistic, such as bringing student development and academic affairs closer together. Recognizing that a great deal of teaching and learning happens outside the classroom, in clubs, sports and other activities, how can Seattle U reposition what teaching and learning mean for our campus?

Finally, Martin wants to help all Seattle U faculty, staff, administrators and volunteers to think about putting students at the center of their work. How do decisions made affect the student experience and ultimately, lead to students’ success?

“When I say success, I don’t simply mean successfully finishing their degree and graduating,” Martin explains. “The bigger part of student success is the kind of student we are forming and graduating—women and men who see their gifts and talents certainly to help build their own lives, but ultimately given to be in service with and for others.”

The Campaign for Seattle University touches each element of the deepened infrastructure described by Provost Martin to elevate the university’s level of academic excellence. Funds raised support construction of the new Center for Science and Innovation. They also support the recruiting and retaining of excellent faculty who not only share Martin’s vision, but will help bring it to life. They sustain and endow scholarships for the most needy and most deserving students. And they support the bridge-building centers and initiatives Seattle U has in place and hopes to develop in the future. The Campaign for Seattle University fuels SU’s ongoing commitment to academic excellence.

To learn how you can help elevate academic excellence at Seattle University with a campaign gift of time or treasure, contact Aly Vander Stoep, Assistant Vice President for Campaign, vanderal@seattleu.edu, 206-296-6386.