Taking a Risk and Finding a Purpose 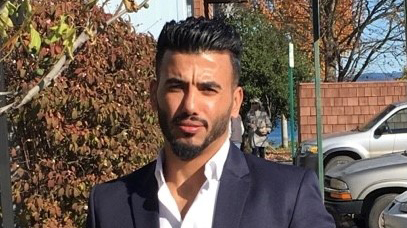 For many students who grew up in the foster care system, attending a four-year university is just a dream. Seattle University’s Fostering Scholars program aspires to change this. The program promotes the educational attainment of youth who have “aged out” of foster care, providing four years of wrap around support. That means financial, academic and personal assistance while students work toward an undergraduate degree and navigate adulthood.

College is not an easy road for these students. Many have experienced trauma and never had consistent support, moving from foster family to foster family. But if a student has the desire and aptitude to succeed at Seattle University, the Fostering Scholars program will invest in their success. Since its launch in 2006, 55 scholars have graduated from the program.

One of these scholars is Hameed Makttoof, ’20.

Makttoof calls the Fostering Scholars program a “gift from God.” Now working on his PhD in psychology at the University of Illinois Urbana-Champaign, he escaped war-ravaged Sadr City, Iraq, and landed in Seattle at the age of 16. He was alone, illiterate and unable to speak English. His story exemplifies the power of determination and perseverance reinforced by cura personalis, the fundamental Jesuit value of care for the whole person.

Makttoof was seven when the United States initiated the war on Iraq in 2003. Bombings, street shootings and death were daily occurrences. When his father was killed and his older brothers imprisoned, Makttoof became the sole provider for his mother and himself. He took jobs wherever he could find them. He worked on constructions sites and in the outdoor market, collected garbage in the streets and sold soda bottles.

“Our cultural rule is if you’re a man, you’ve got to help your family,” Makttoof says. “It doesn’t matter how old you are and I’m proud of what I did.”

To escape the trauma that surrounded him, Makttoof started running. When he was 10, he entered an amateur race in Sadr City and won first prize. The coach of a running club recognized his talent and told Makttoof he had the potential to become a serious competitive runner. He invited him to train with his club, which Makttoof did three times a week.

In 2010, Makttoof competed in and won the Arab Athletics Championships in Lebanon, an international competition between Arab countries.

“It was a dream come true to run for my country,” he recalls. “My coach didn’t think I’d even place in the Top 10, but he wanted me to have this experience and took me to Lebanon. He was so proud when I won! Waving the Iraqi flag as they played the national anthem is one of the happiest moments of my life.”

His time in Lebanon inspired Makttoof well beyond a stellar athletic performance.

“There was no war in Lebanon,” he says. “When I looked in people’s eyes, I saw something different than what I saw in the eyes of my people—they seemed happy. The other runners talked about school and some spoke more than one language. I had been out of school for seven years and couldn’t read or write. I felt so far behind my peers. It made me seriously consider what I wanted for my life and I knew I wouldn’t find it in Sadr City.”

A year after returning from Lebanon, Makttoof made plans to leave Iraq. He sold a weapon he’d owned for $100, packed a bag and took a bus to the Turkish border only to be sent home because he was a 16-year-old unaccompanied minor. Ten days later he succeeded, making it to Turkey.

“I needed to get out of Iraq whatever it took,” he says. “In Sadr City, I risked death every day and what risk could be worse than that? I decided if you take a risk to look for your purpose you might find it.”

While applying for refugee status in Turkey, Makttoof met an American United Nations employee who asked if he would like to go to America. Initially he said no until he was informed that he could enroll in school in the U.S. Getting an education had become Makttoof’s deepest desire.

He received United Nations guaranteed safe passage to the United States and landed in Seattle, where he was met at the airport by a representative of Refugees Northwest. The organization helped Makttoof settle, placed him in a group home with other youth in the foster care system and enrolled him in Renton High School as a freshman. He took three English Language Learner (ELL) courses each day and started running with the cross country and track teams.

Makttoof worked hard. He learned to read, write and speak English. His dream was to go to college. After about a year, he was in need of new living accommodations. His high school track coach posted an inquiry on Facebook to find someone with a room to rent.

“My undergrad experience at Seattle U inspired me to share my home,” Schultz explains. “I am from a culturally homogenous town in Montana and SU opened my eyes to a broader world of people, places and ideas, what we should expect of ourselves and of society. I wanted to help.”

Makttoof, who was then an 18-year-old sophomore, moved in.

It was a little awkward at first, according to Schultz. “We weren’t sure what our relationship would be—parental or landlord/tenant. But Hameed quickly became part of our family and Vanessa and I became like an older sister and brother to him.”

The Schultz’s transferred Makttoof to Chief Sealth High School, which has a strong ELL program and one of the most ethnically and culturally diverse student bodies in Washington. The couple took turns tutoring Makttoof. “Education was a beacon to Hameed, and he worked harder than anyone I’d ever met,” says Schultz.

During Makttoof’s high school senior year, he was recruited by 14 colleges and universities to run track. He signed with Central Washington University, but the demands of college athletics and a heavy academic schedule became overwhelming.

“I started to question what was more important, track or my education,” he says. “I chose education and stopped running track. I passed all my classes after making that decision.”

In the meantime, Schultz became aware of the Fostering Scholars program.

“I saw the graduation rates for students in the program and they were awesome,” he says. “Fostering Scholars appeared to provide a very supportive environment for promising students who had been in the foster care system and needed some extra support in transitioning to college life. It sounded like just the thing for Hameed.” When he returned to the Shultz’s home the summer following his freshman year, Joe put Makttoof in touch with Fostering Scholars Director Colleen Montoya Barbano.

“Hameed’s academic history required that he take some additional courses to qualify for admission,” says Barbano. “I was so struck by his determination to do what he needed to do to be at Seattle U.”

An admissions advisor told Makttoof to take an upper-level psychology course, his area of interest, as well as an upper-level math and science class before applying. Makttoof went back to Central Washington University for a quarter to take the required classes. He reached out to Barbano every couple of weeks to update her on his progress—he earned straight A’s. He applied and was accepted to Seattle U and the Fostering Scholars program as a 21-year-old transfer student.

“Fostering Scholars is a gift for people like me,” says Makttoof. “Colleen and Karina Saunders, the program’s assistant director, made a home for us. The emotional support they provided was great. Whenever I had a problem, I could go to Colleen and Karina for help. They made sure we all had a place to go for the Thanksgiving and Christmas holidays and checked-in with us regularly just to see how we were doing. I could close my eyes at night and feel good. I am so thankful for this program.”

Makttoof graduated from Seattle U in June 2020 with a bachelor’s in psychology. Later that summer he was notified of his acceptance to graduate school. Makttoof’s goal is to one day work with the UN Doctors Without Borders program and serve people in refugee camps.

“I want to become a counselor specializing in work with victims of post-traumatic stress disorder and people who have experienced life in a war zone and other trauma,” he says. “I remember the hopelessness I felt as a child in Sadr City. I was fortunate enough to be helped by many people and now I have dreams. It’s time for me to pay it back.”

If you would like to make a gift to the Fostering Scholars Program, click the following link and select Fostering Scholars in the Designation field, https://connect.seattleu.edu/giving/make-a-gift. For program information, contact Colleen Montoya Barbano, montoyac@seattleu.edu, 206.296.5310.