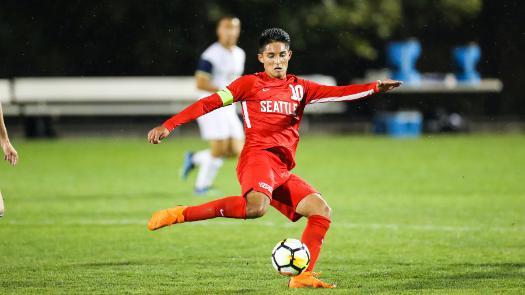 Four years ago, Head Men’s Soccer Coach Pete Fewing and Associate Head Coach Nate Daligcon approached Sean Machak, exercise scientist and supervisor of the Human Performance Laboratory (HPL) in Seattle U’s Kinesiology department, to discuss wearable technology (sensors and GPS) as a means to assess player fatigue levels on the field for injury prevention, and also as a tool to help build endurance. Machak was aware of some of the technologies the coaches were considering, and shared that the HPL had a system in place that could measure more collected data than some of the industry meters, and do it more economically.

They decided upon a collaborative partnership. Men’s soccer would invest its own funds in the purchase of Zephyr Bioharnesses and GPS monitors that players would wear in practices and games throughout the season. The technology would collect real time data on each player. Machak would run the monitoring system in the lab, interpret the data and provide the coaches information he believed to be valuable. He would also test the athletes three times a year in a controlled lab setting, and compare the lab data with data collected in the field.

The bioharnesses, which the players wear around their torso, include an accelerometer, which collects acceleration data in three dimensions (up/down, forward/backward/ and side to side), allowing the lab to look at the number of player impacts, jumps and strides. A heartbeat monitor (electrocardiogram), records the electrical impulses that move through the heart, measuring heart rate and heart rate variability. A breathing sensor measures thoracic expansion of the torso, providing data on a player’s rate of breathing. A separate GPS receiver, which connects to satellites, provides information on a player’s velocity and miles run.

Student interns from the HPL attend soccer games and practices to provide quality control. They ensure that the monitors are working and that players remember to turn on the GPS. Afterwards, they download the player data into a computer, and it is monitored in the HPL throughout the season. Validating what the wearable sensors are measuring on the field requires the highly controlled environment of a laboratory. Machak looks for trends.

“Soccer players are endurance-based athletes, and with endurance sports one of the most important things we know is an athlete’s ability to consume oxygen is key,” he says. “The higher the rate of oxygen consumed the more endurance the athlete will have.”

In the lab, Machak can analyze data indicating how a player’s body is responding to running at different speeds. This includes measuring lactic acid production overtime, a factor in muscle fatigue, which increases when strenuous exercise lowers the flow of blood and oxygen throughout the body. He can also see at what heart rate and speed lactic acid production occurred.

One of the biggest findings uncovered through the partnership has to do with the optimal training load for individual players. By monitoring data collected in practices and games throughout the season, Machak can see which athletes are tolerating the volume and intensity of training well and which are not. Though all of the players may appear to be performing at the same level externally, internally, Machak claims, it’s a different story.

This gets to another component of the partnership – custom, data-driven fitness plans. After monitoring fitness trends for each player throughout the season and identifying strengths and weaknesses, Machak works with the team’s head strength and conditioning coach to design a custom summer fitness plan for each player, which provides a training load based on his personal fitness needs. The goal is that each player will be in top shape at the start of pre-season.

The plan includes a wellness survey that players are asked to complete each day, with questions pertaining to how much sleep they are getting, the quality of their sleep, their stress level, diet, muscle soreness, etc. They are also asked to log any exercise they do each day and the duration, and to rate their perceived level of exertion. This data is used to assess the athlete’s internal load – a psychometric on how they are feeling the exercises.

Participation in the summer training program is completely voluntary. Coaches cannot require players to do it, and are in fact, prohibited from having contact with the players over the summer by NCAA rules. Machak tells the players what they are expected to do every week throughout the summer if they are a starter. If they don’t do it, their chances for injury increase--and there’s research to prove it.

Are players and coaches seeing results from this partnership, now in its fourth year? One player who was introduced to Machak by the coaching staff back in 2015 is Alex Roldan, ’18, a midfielder who now plays for the Seattle Sounders.

“Our team had an average fitness load based on an average of individual player scores,” Roldan explains. “The goal was for all players to be at the average score or above during the season. When I felt I wasn’t getting enough fitness, the coach would check my scores to see if I had hit my load. It was very helpful to me in reaching the level of fitness I wanted to achieve.

The scores also gave our coaches a good understanding of players’ limits. Often a player would become fatigued during a game and his real time scores would show this. The coaches would pull him out before he got injured. Injury prevention was the biggest concern.

I still use this type of technology with the Sounders. A lot of pro teams use player data to help improve performance and prevent injury.”

According to Machak, results are athlete-dependent and center around an individual’s weak points, so it’s difficult to give a broad-sweeping measure of improvement. In general, however, he has seen positive changes in areas that athletes needed to improve at pre-season, which is when they need to be in top shape.

The team recently experienced how data can be used to influence game strategy. The high elevation of Colorado Springs, where the team played a game, limits the ability to consume oxygen. When player scores were impacted during their usual high possession, high pace, high pressure style of play, the team had to change strategy to keep-up with the acclimated home team.

According to Roldan, player scores also help coaches to determine who should start and who has the endurance to play more.

Coach Daligcon adds, “The technology gives us a chance to look at the student-athletes who have not played and how we can structure a replacement workout to keep them in top condition. It’s all about injury prevention and peak performance.”

“The challenge for my field going forward is just getting comfortable with these big sets of data,” Machak explains. “It’s the direction that things are going. It’s phenomenal that we have this soccer data set to work with. We’re able to help the team, and they’re able to help us. It’s a powerful experience for both sides of the house.”

Machak hopes to grow the program and work with Seattle U’s other athletic teams in the future, but that will require more laboratory staff and more wearable technology, in other words, financial investment. To date, men’s soccer has invested approximately $20,000 in bioharnesses and GPS receivers, and the sentiment is the investment has been worthwhile.

Says Coach Fewing, “We really appreciate the support that Sean Machak and his team have given us. I give our Assistant Coach, Nate Daligcon, all the credit for having a vision around kinesiology and building the partnership with the Human Performance Lab.”