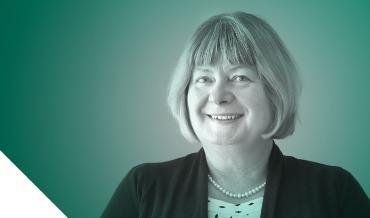 “Like other first-generation immigrants, I had to overcome many adversities to become who I am today. To many students, I am the living example of ‘Yes, you can.’ As such, I expect a lot from myself and no less from my students.”

Danuta’s belief that “one should be part of the solution” has driven her across the globe – from her home in Poland, where she was a member in the Solidarity Workers’ Union, to Nova Scotia, where she fled with her husband and infant son after Poland’s military crackdown in the 1980s. Her path to becoming a College of Nursing professor and associate dean is one the recently naturalized U.S. citizen describes as “the rivers of my life coming together.”

Deep reflection led Danuta to a career in nursing after her master’s degree in education from Poland’s oldest university did not translate to employment in Canada. “I envisioned using my experience as a political activist and my knowledge of teaching and fluency in several languages to promote equitable healthcare for all but especially the underserved.”

She earned an RN degree and did clinical work in Halifax before earning her doctorate in nursing from the University of Washington. Attracted by Seattle U’s social-justice mission, she joined the faculty in 2005 and rose through ranks while managing a substantial teaching load and mentoring many students. She gratefully acknowledges those “who saw my intellect and potential behind the thick accent.”

The international nurse leader has focused her work and research on women and infants from immigrant populations, non-traditional families and the future of nursing. She has published extensively, authored a book and received a Robert Wood Johnson Foundation (RWJF) Executive Nurse Fellowship.

Danuta never spoke about her experience as a political refugee until asked to write an autobiographical poem for the RWJF fellowship. Poignant memories flood the poem, which ultimately looks forward. “I am from the land that nurtured me as a child and expelled me as an adult…I am from the hope for better days ahead.”