Attending to Students’ Mind, Body and Spirit: Retreats and Immersions

Seattle University retreats and immersions are some of the most memorable landmarks in a student’s spiritual journey. These experiences provide a point of entry into community for students of all faith traditions or of no faith tradition, as well as a space for self-reflection, discernment and exploring one’s own spirituality. Campus Ministry, a department under the auspices of Student Development, runs a number of student retreats and immersions each year. Some, such as the New Student Retreat, serve a particular segment of the student population, while others, such as the Search Retreat, are open to all. Immersion experiences, also open to all students, offer a deep dive into issues of social justice.

Two New Student Retreats are held each year in November at Camp Indianola on the Kitsap Peninsula. The overarching theme of these retreats, open to all entering freshmen and transfer students, is making a home at Seattle U. Students get to know one another and build community while also learning how to locate resources within the university. Sophomore, junior and senior student leaders facilitate ice-breaker activities, give talks and lead small group discussions. The retreats are not a required part of new student orientation; students attend of their own volition. According to Erin Beary Andersen, associate director of Campus Ministry, about 40-55 students typically attend each retreat. 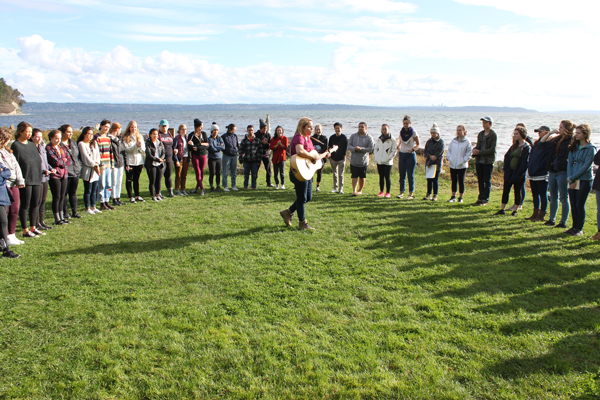 Ian Wuertz attended New Student Retreat as a freshman in 2015, and then went on to be a student leader in 2017 and 2018. “The New Student Retreat helped me find an amazing community on campus, my peers, faculty, staff and administrators, and has also been a way for me to discern what I want to do post-graduation. The most impactful aspect of the retreat for me, besides attending as a first year student, has been to lead and watch the new students in my small group go through the same trials, tribulations and revelations as I did, while being a resource for them.”

The Search Retreat celebrates its 50th anniversary this year! Search was started in 1969 by a Seattle U sophomore, Nancy Roach, and became particularly near and dear to the heart of one of Seattle U’s most beloved Jesuits, Father Roger Gillis. From the time he arrived at Seattle U in the late 1980s until his death in 2010, “Father Rog,” as he was known to students, participated in more than 40 Search Retreats.

Broadly spiritual to provide an entry point for Seattle U’s diverse student population yet theologically-based, Search welcomes all students in to reflect upon how they have experienced love in their lives, and how they might enter into healthy relationships more fully in order to become more loving people in community.

“Many students deeply seek a space in nature to explore their inner-selves,” says Beary Andersen. “Fr. Rog knew the importance of providing students this space to reflect and to see how loved they are in community. Search is very intentional in helping students to understand how deeply loved they are – and that was Fr. Rog’s heart. He adored spending time with students and witnessing the transformation they experienced on retreat.”

Immersion experiences differ from retreats in their length and the level of educational formation students receive prior to embarkation. While retreats require no advance preparation, students spend an entire academic quarter in formation for immersions. Campus Ministry offers three immersion experiences each year. One is in Tijuana, Mexico, one is in Appalachia and the other is in British Columbia. Mexico and Appalachia are week-long experiences. While in formation students learn about the people of the region they will visit, their history and culture, and about the region’s political climate.

The Tijuana trip is organized in partnership with Esperanza International, a nonprofit organization offering service-learning immersion where volunteers help build homes in communities across Tijuana and have the opportunity to authentically engage in the border culture of the city, through the eyes of its own residents.

The Appalachia trip is a cultural immersion organized in partnership with Wheeling Jesuit University in Wheeling, West Virginia. The trip focuses on relationship building with Appalachian communities, authentic learning on the challenges and beauties of the region, and reflection based on Jesuit pedagogy.

Erin Alberts, a senior psychology major and SU’s Student Campus Minister for Retreats, participated in the Tijuana immersion in December 2018. “At first I was nervous about perpetuating ideas of the white-savior complex. However, Campus Ministry was really aware of this issue, and we had pointed discussions about it before we left.”

“The most impactful part of any Campus Ministry experience,” she continues, “is always hearing people's stories. In Mexico I was able to speak to a community member one-on-one and hear how he has been personally affected by migration and the U.S. without ever having crossed the border. He spoke so much wisdom and was able to relay his story in a way that was open and accepting, which was beautiful to see because he was speaking to me, a white, American person. His story held a lot of grace.”

The third experience is shorter, an Inter-Faith Immersion over Memorial Day Weekend. Students travel to Richmond, B.C., where they explore the city’s “Highway to Heaven.” This three-kilometer stretch, officially known as No. 5 Road, is lined by approximately 20 religious institutions and schools from the Buddhist, Sikh, Hindu, Jewish and Muslim traditions, all of which blend English with different global languages, and eight Christian churches. Predominantly evangelical Chinese, these churches hold services in Cantonese, English and Mandarin.

The Highway to Heaven has been raised up as a model of interfaith cooperation and harmony. SU students visit the different houses of worship and also take a day trip to the Squamish Lil’wat Cultural Center at Whistler to learn about the heritage of these Aboriginal peoples. They return to campus with their eyes opened to different faith traditions and a better understanding of the possibilities and difficulties of interfaith engagement today.

The quarter-long formation for this immersion includes visiting a variety of houses of worship in the Seattle area.

The student cost to participate in the above-mentioned retreats is subsidized by Campus Ministry. Students pay a $30 fee to attend the New Student and Search retreats, and Campus Ministry pays a $150 per student subsidy. If students cannot afford to pay the $30 fee, Campus Ministry will provide scholarships or offer a payment plan.

Campus Ministry has a goal that any Seattle U student who wants to experience a retreat or immersion is able to do so, regardless of their ability to pay. Toward this end, the $1.5 million Roger Gillis, S.J., Endowment to Enliven the Student Experience was established in 2018. Once fully funded, distributions from this endowment will grow the number of retreats offered each year and provide greater access to immersions for students with financial need. The endowment is currently approximately 50 percent funded.

“I believe that new worlds can be opened to students through retreat and immersion experiences,” says Andersen, “whether it’s their own spiritual world and connection to God, the life experiences of people in other cultures or how they are called to do justice in the world. When students deeply explore their own spirituality and their own passion for justice and the common good, that’s where transformation happens.”

If you would like to support Campus Ministry Student Retreats and Immersions with a gift to the Roger Gillis, S.J., Endowment to Enliven the Student Experience, please click here https://www.seattleu.edu/campus-ministry/give/.