Over the past 19 years Costco Scholarships have given the transformative gift of higher education to 1,033 deserving underrepresented students in the greater Seattle area. These students have in turn enriched the campuses of Seattle University and the University of Washington with the strength that derives from a diverse academic community. 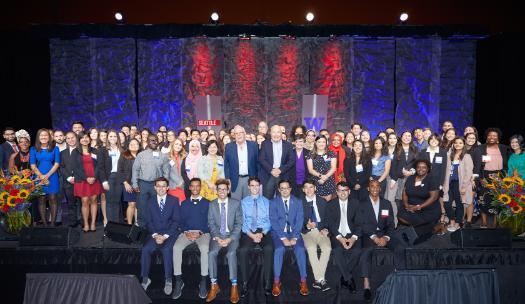 The 19th annual Costco Scholarship Fund Breakfast, an opportunity for Costco vendors from around the world to learn about the fund and hear inspirational personal stories from scholarship recipients, took place on September 14 at the Meydenbauer Center in Bellevue. Attendance was up by 20 percent over last year’s event, with 1,400 vendor representatives in attendance. The breakfast raised $4,448,900 for the scholarship fund.

Highlighting the program were four Costco Scholar stories. Two students from the UW and two from SU presented, one from each university via video and the other in-person.

Aredy Garcia Quijano, a freshman studying criminal justice/pre-engineering at Seattle U presented via video. Aredy and her family came to the United States when she was 11 years old to escape a dangerous community and political instability. Her parents’ dedication and hard work to provide a better life for her fueled Aredy’s determination to succeed. A varsity athlete in high school and an active volunteer in her community, Aredy was determined to achieve her dream of attending college. A Costco scholarship closed a financial gap, enabling her to attend SU.

Amina Ibrahim, an SU junior majoring in communication and media studies with a minor in criminal justice, grew-up in Seattle’s Beacon Hill neighborhood. Her parents left their native Somalia to escape civil war and political turmoil, eventually emigrating to the United States. Though she never attended college herself, Amina’s mother stressed the value of education to her five children. She also encouraged them to seek out support and resources available to them at school and in their community in order to overcome the financial barrier that stood between them and college.

A Costco Scholarship made it possible for Amina to attend Seattle University where she serves as president of the Muslim Student Association, and as a multi-faith minister through Campus Ministry. She also had the opportunity to study in Ghana, where she volunteered her time at a local elementary school catering to children with disabilities.