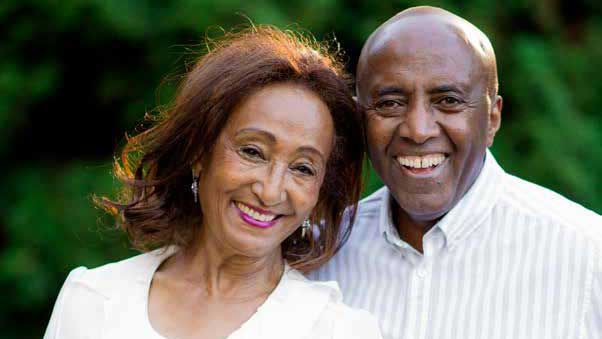 Ezra Teshome arrived at Seattle University in the early 1970s from Addis Ababa, Ethiopia. He wanted to continue the Jesuit education he’d experienced as a student at Nativity Boys’ School, a missionary school in Ethiopia. However, paying for college proved a struggle.

Ezra had money for tuition, but little else. “I went and spoke to the vice president of Seattle U about my situation,” he says, “and the university extended wonderful support—they covered the cost of my dorm and I helped by working on campus. That support has always been in my mind, because without it I could not have completed my education.”

Ezra graduated in 1975 with a pre-law degree and a grateful heart. He’d planned to return to Ethiopia, work for a year and then attend law school in the U.S. But political turmoil in Ethiopia altered his plans. He applied for and was granted asylum and remained in Washington state. He built a career in the insurance industry and eventually earned his U.S. citizenship.

An active member of the University District Rotary Club in Seattle, Ezra was elected club president in 1996. He attended a peace conference in Ethiopia that year, hosted by the Rotary International president. It was there that he learned more about the organization’s campaign to eradicate polio. Ezra became very involved with the campaign, returning to Ethiopia every year thereafter with American and Canadian Rotarians to help with immunization and other projects aimed at improving education, health and welfare. In 2010, Ezra was honored by the World Affairs Council with a World Citizen Award for his contributions to public understanding of international relations and the promotion of community involvement in world affairs.

Ezra’s community involvement and giving also extends to Seattle U. He and his wife Yobi, ’83 (College of Nursing), volunteer their time on multiple leadership councils and task forces. Currently, Ezra sits on the Seattle U Board of Trustees.