The Grapes of Wrath (Reprise): Rideshare and Food-delivery Services 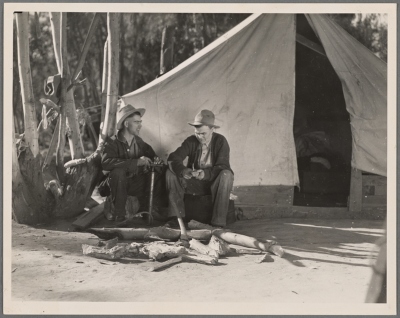 John Steinbeck’s realistic novel The Grapes of Wrath focuses on the struggles of immigrant farm workers in California during the Great Depression [1]. Today’s gig workers do not face the same brutal conditions experienced by “Okies” in the 1930s. Still, important economic themes of Steinbeck’s story are playing out today in the experiences of drivers and deliverers in the gig economy.

One repeated theme is an oversupply of labor leading to lower wages. Steinbeck wrote how employers in California’s Central Valley during the Dust Bowl used this principle to their advantage: “The great owners were glad and they sent out more handbills to bring more people in. And wages went down and prices stayed up” [2]. Before its initial public offering, Uber recruited drivers with promises of high incomes, falsely claiming the median annual income of full-time UberX drivers in New York City to be over $90,000 [3]. The number of rideshare drivers in New York increased rapidly, and by 2018 about 80,000 vehicles operated by Uber, Lyft, Via, and Gett/Juno flooded New York City streets [4]. A city with more idle drivers benefited customers, who didn’t have to wait so long to be picked up, but it harmed the drivers trying to make a living. Compounding the drivers’ misery, the rates offered by the apps steadily decreased. A 2018 study revealed that 85% of NYC rideshare service drivers netted less than $17.22/hour (the equivalent of a $15 minimum wage for independent contractors) [4]. The experiences of drivers and riders for food-delivery services have been similar. When food-delivery apps first emerged in 2016, companies ladled high-paying gigs on deliverers, who made as much as $2,000 a week. As the number of riders grew, the incentives shrank. Riders now make about $10-20 an hour [5].

Free market advocates argue that it doesn’t matter whether this is Depression-era California or modern Manhattan; we should respect the law of supply and demand. If workers freely choose to undertake the work they are doing, employers can legitimately claim they are not doing anything wrong in paying them the agreed-upon wages. However, an examination of the situation faced by gig workers undermines the supply-and-demand-based argument. For one thing, the apps often require gig workers to accept a job with incomplete information. Uber Eats doesn’t show the address of the delivery until the rider picks it up [5]. Postmates doesn’t show how much a job pays until it is accepted [5]. Furthermore, borrowing from the video game industry, the apps tempt riders to take on assignments with the lure of possible financial rewards [5]. Finally, some people may feel they cannot refuse work. For example, a worker desperate to pay the rent may accept an unfair deal if she thinks that is the only way she can earn the money she needs [6].

Another counter to the market-based-economy rationale is the fact that corporations distort the market to their own advantage, a second theme of The Grapes of Wrath echoed in rideshare services. In Steinbeck’s novel, companies that own both canneries and fruit orchards manipulate the price of fruit in order to drive smaller farmers out of business [7]. Today, the rideshare companies, with billions of dollars from investors, are dominating the transportation market by pricing their services at an artificially low rate. The losses suffered by these start-ups prove their prices are too low. In the second quarter of 2019, Uber reported total revenues of $3.2 billion and a net loss of $5.5 billion. If losses associated with stock compensation are subtracted, Uber still lost $1.3 billion [8]. In the same quarter Lyft had total revenues of $867 million and a net loss of $644 million [9]. The strategy to build market share is working for rideshare companies. Between 2011 and 2018, the use of ridesharing services in the United States grew from close to zero to 4.2 billion rides per year. Meanwhile, the number of taxi trips annually declined from 1.4 billion to 0.6 billion [10]. Incomes of taxi drivers plummeted, and drivers who borrowed hundreds of thousands of dollars for taxi medallions were financially ruined [11].

Automation is a third repeated theme found in Steinbeck and today’s gig economy. In The Grapes of Wrath, workers fear the introduction of mechanical harvesters that will destroy their livelihoods [12]. Today, rideshare companies hope that by eliminating the cost of drivers, they can achieve profitability. This is why they are investing in development of autonomous vehicles that do not require a driver [13, 14]. Food delivery companies are experimenting with autonomous deliveries with the same intent [15].

In short, ridesharing and food delivery companies have been unfairly using gig workers as a means to achieve their goals. In their short-term quest to gain market share, they have allowed too many workers to compete for the amount of work available, and they have underpaid workers as well. The long-term aim of these companies is to eliminate the cost of human labor in the services they provide. When autonomous vehicles are available, the companies will cast aside the very drivers whose work fueled their growth.

These start-ups are responsible for other negative consequences as well. Rideshare companies have put the traditional taxi industry in a perilous state and have added to traffic congestion in some major cities [16, 10]. Food-delivery companies have placed significant financial pressure on restaurants, which have always operated on tight margins [17, 18].

Finally, Steinbeck raises the question of government intervention, and that question is just as relevant today. “They say the gov’ment is gonna help. They don’ know when” [19]. Recognizing the harms that rideshare companies have caused, cities are belatedly taking steps to regulate them. In August 2018 New York City became the first municipality in the United States to stop issuing new licenses for ride-sharing services [20]. Four months later, the New York Taxi and Limousine Commission voted to require a minimum wage for rideshare services drivers of $26.51 per hour before expenses or $17.22 per hour after expenses [21].

With billions of dollars of investor funding, rideshare and food-delivery companies have entered relatively unregulated markets, created a new class of underpaid workers, and competed unfairly with existing businesses. It is the government’s responsibility to step in and regulate these companies to ensure proper working conditions for drivers and riders and to prevent venture-capital-fueled distortions in the market economy.