The Office of Diversity and Inclusion offered a message of affirmation and hope to honor and celebrate our Hispanic and Latin American communities:

As we mark the beginning of Hispanic and Latin American Heritage Month, Seattle University affirms this diverse and vibrant community. Officially designated National Hispanic Heritage Month, this month celebrates the vast diaspora of cultures, identities, and experiences with ancestral connections to Mexico, the Caribbean, Central, and South America, and the many Indigenous Nations and people that preceded. Notwithstanding geography, we acknowledge that no one word, phrase, or month can encompass the people and experiences that make up this dimension of the American story. To our students, faculty, staff, and administrators, we appreciate all you bring to our university and the larger community. I think often about my late parents, Eudelio and Edelmira Varona, during National Hispanic and Latin American Heritage Month. They, like so many immigrant parents, bore enormous hardships as new Americans – principally for the benefit of their children. My mother gave birth to me in Cuba in 1967, at a very perilous time in that country. She and my father sought exile in United States so that they could raise me and any future siblings (they had my brother Eddie five years later) in the land of opportunity and freedom. We settled in Newark when I was three years old. 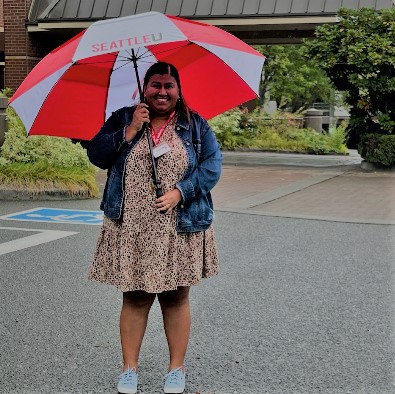 As we enter Latinx Heritage Month, I think about my family and the power of a name. I am Marissa Robledo (Ma-ree-sah Rro-ble-do) a PROUD Mexican American woman, born and raised in the Imperial Valley. You might be thinking – huh where’s the Imperial Valley? That is a great question, my hometown of El Centro, California is located 2 hours southeast of San Diego, California, 45 minutes from Yuma, Arizona and 15 minutes from the Mexican American Border.

Each year, Americans observe National Hispanic Heritage Month from September 15 to October 15, by celebrating the histories, cultures and contributions of American citizens whose ancestors came from Spain, Mexico, the Caribbean and Central and South America.

The observation started in 1968 as Hispanic Heritage Week under President Lyndon Johnson and was expanded by President Ronald Reagan in 1988 to cover a 30-day period starting on September 15 and ending on October 15. It was enacted into law on August 17, 1988, on the approval of Public Law 100-402.

The day of September 15 is significant because it is the anniversary of independence for Latin American countries Costa Rica, El Salvador, Guatemala, Honduras and Nicaragua. In addition, Mexico and Chile celebrate their independence days on September 16 and September18, respectively. Also, Columbus Day or Día de la Raza, which is October 12, falls within this 30 day period.

Navigating Identifiers and Other Media

Exploring the Complexity of Colonialism, the Transatlantic Save Trade, and Colorism

Send your event/program information to inclusion@seattleu.edu Last year, the Heritage Plaza housed 20 poets out of the 66 included in the onehundred-year collection of Chicanx/Latinx poetry to celebrate 100 years of poetry. The anthology, In Xóchitl in Cuícatl: Floricanto Cien años de poesía chicanx/latinx (1920-2020) is a fully bilingual with over 700 poems by Chicanx/Latinx poets from all over the United States, published in Madrid, by Polibea Press. The Anthology was edited by Gabriella Gutiérrez y Muhs, Ph.D. and Armando Miguélez, Professor at the Miguel Hernández de Elche University in Alicante, and a specialist on early Chicanx literature.

Alumna Veronica Eldredge's art work was selected by Polibea Press in Spain to appear as the cover design of the anthology: SU students working alongside their Mexican neighbors to lay a foundation for a house in a Tijuana, 2019 Mexico Immersion to Esperanza. Image courtesy of Associate Clinical Professor Audrey Hudgins.

To see your event posted on our site, send flyers and event information to inclusion@seattleu.edu.

In the media and much of the official political discourse, the word “illegal” prevails over “undocumented” and the term “immigrant” over “refugee.” How would anyone who is stigmatized as an “illegal immigrant” feel “safe” and “happy”?

Valeria Luiselli, Tell Me How It Ends: An Essay in Forty Questions

Add your scholarship, interviews, articles to this list by emailing inclusion@seattleu.edu Surviving the Americas: This collaborative research project brought together researchers, including Associate Professor Serena Cosgrove, from Nicaragua and Seattle to research and write this book about the Garifuna people of Nicaragua, who form part of the Central American, Afro-Indigenous people descended from shipwrecked West Africans and local Indigenous groups on the Caribbean island of St. Vincent. Read more from Global Engagement here.

This website is a living resource. We aim to keep it relevant and helpful. We invite you to share your ideas of a resource or other material for education and enlightenment here.