Jamie is the co-founder of the international youth climate justice movement Zero Hour that led the official "Youth Climate Marches" in Washington, DC and 25+ cities around the world during the summer of 2018. Jamie is also a plaintiff on the Our Children's Trust  Youth v. Gov Washington state lawsuit, Aji P. vs. State of Washington, suing the state of Washington for denying her generation their constitutional rights to a livable environment by worsening the climate crisis. Jamie is the author of countless thought-provoking Op-Eds for various publications such as The New York Times, Teen Vogue, The Washington Post, TIME Magazine, DAZED, Refinery29, and The Guardian. Jamie’s debut book, "Youth To Power: Your Voice and How To Use It,” serves as a guide to organizing and activism. Jamie represents Zero Hour at international leadership events like the C40 Mayors summit and the UN Youth Climate Summit. In September 2019 she testified before US Congress alongside fellow youth activist Greta Thunberg, holding leaders accountable to taking urgent climate action. She served as a surrogate for the Bernie Sanders 2020 Presidential Campaign and was one of the youngest Delegates at the 2020 Democratic Convention. Jamie is one of Teen Vogue’s “21 Under 21” girls changing the world in 2018, Fuse TV’s Latina Trailblazer of 2018, one of The Today Show’s 18 under 18 Groundbreakers of 2019, MTV EMA Generation Change winner of 2019, one of the BBC's 100 most influential women of 2019, and one of GLAAD’s 20 under 20 LGBTQ+ people changing the world. She is on the OUT 100 list of 2020. For more information about Jamie, check out this Rolling Stone interview.

Earth Talk presentation: Getting to the Roots of the Green New Deal

The Earth’s global temperature is expected to rise 4° Celsius by 2100 if drastic worldwide changes are not made immediately. This will inevitably and irreversibly alter every aspect of life on Earth. How will our seasons and societal systems change? The Green New deal is a resolution seeking to address climate change through a just transition to renewable energy sources. Jamie will present a vision for the future that is focused on structural change to our entire economic and energy system and addressing socioeconomic inequality. 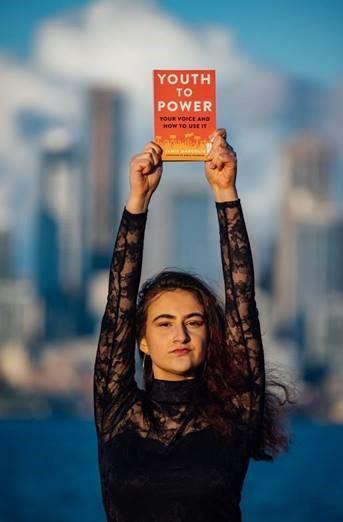