Seattle University Campus Ministry has been blessed by the generosity and gifts of many persons of faith. In particular we would like to remember Reverend Joseph A. Maguire, S.J.. A Campus Ministry endowment carries Fr. Maguire's legacy and supports the ongoing operations of Campus Ministry. 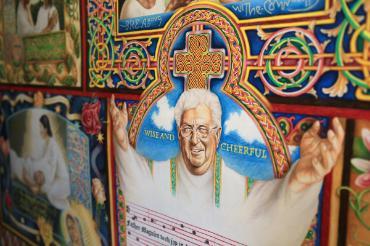 "I've had a wonderful life, so full of spiritual experiences, so full of real joy. It is humbling to me how that so many people find comfort in my spiritual ministry. I am truly grateful."

Fr. Maguire was known as "The Singing Priest." He was fond of saying "those who sing pray twice." He was the youngest of nine children, raised on a farm in Spokane, Washington. Fr. Maguire was very close to his siblings and to his nieces and nephews. He attended Gonzaga University on a music scholarship, and entered the Society of Jesus the August following his graduation. He loved being a Jesuit priest, and said "I can't imagine a more wonderful life." Fr. Maguire formed strong bonds of love with the students he taught and served everywhere.

No stranger to the Jesuit mission for social justice, Fr. Maguire spent one year in New York at the Shrine of the North American Martyrs for his Tertianship. In November of 1963 he was invited to the Carmel Mission to sing two solemni High Masses in memory of Fransiscan Missionary Junipero Serra. It was the 250th anniversary of his birth and the 200th anniversary of his death. President Kennedy was shot that Friday, and on Sunday Fr. Maguire celebrated Requiem Masses in honor of Kennedy

Fr. Maguire's Legacy of love for the students is maintained through the generosity of donors to the Maguire endowment for Campus Ministry.