Revisiting Profit and Purpose at Albers

One of the high points of Albers Ethics Week this past May was Harvard Professor Mihir Desai’s presentation on The Wisdom of Finance. The audience assembled in Pigott Auditorium was introduced to the thesis of his recent book that the basic lessons of finance—including how to manage risk, choose under uncertainty, and navigate the pitfalls of agency relationships—are best understood as principles derived from the full range of human experience, as expressed in art, literature and history.

But, since this presentation, I have had many conversations with students about something Professor Desai said during his featured discussion with Albers Professor Marc Cohen. Asked by Professor Cohen whether he subscribed to the oft-cited dictum that the sole objective of corporate management should be to enhance profitability, Professor Desai largely responded in the affirmative. He noted that profit should indeed be the focus of corporate management and that other social objectives, which we often associate with “corporate citizenship” and “CSR,” should be shouldered by public institutions and not corporations. 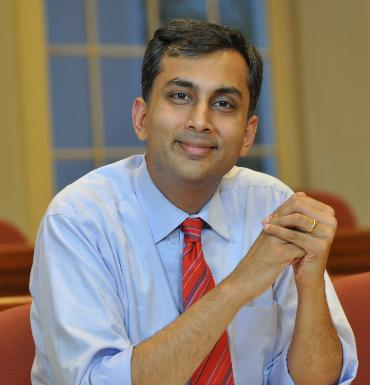 To some this may not be surprising coming from a finance professor; for others, it seemed to convey an idea that stands in contrast to the mission of the Albers School and Seattle University, which implicitly emphasizes that corporations should promote the common good, not simply maximize profit.

As with many philosophical issues, things are complicated. I suspect that Professor Desai is holding on to some related ideas, held both by those on the right and left, which suggest a more nuanced view than some may have inferred from these remarks.

Second, Professor Desai likely grounds this division of moral labor between corporations and the state on the assumption that there are important gains in our collective well-being that are achieved when corporations serve narrower economic objectives rather than large-scale social objectives. Goals like justice, public health, education and national security are complicated and demand attending to a plurality of interests that modern corporations may find extremely costly and difficult to pull off, at least alongside of the demands to innovate and nimbly provision new goods and services that can be financed over time.

As some students have aptly pointed out to me, this line of thinking is open to debate. What do we expect of corporations when the state falls short in its regulatory role? What about those corporations that serve investors well by pursuing “social strategies” that advance some dimension of the common good? And aren’t there situations where corporations, not legislators or regulators, are best situated to institute progressive change in the marketplace?

These are very good questions. But it is important to recognize that the view espoused by Professor Desai is not one that simply extolls the virtues of profit or an unfettered market, full stop. There is plenty of room in this position for robust corporate responsibilities to refrain from unfair, fraudulent or socially harmful business practices even if not proscribed by law. There may even be space for Professor Desai to justify positive obligations not to interfere in the political process and to advance protection of the natural environment. These constraints are philosophically compatible with the notion that the central task of management should remain focused on how firms can provide returns to its investors, which, in a slightly counterintuitive twist, may be the very thing that serves the purpose of business to enhance our collective well being.

A reasonable—albeit controversial—interpretation of Professor Desai’s view is that we are all better off when we distribute social responsibilities differently over different actors, allowing for the benefits of free enterprise to be captured while tending to other morally important concerns. The common good, after all, is multidimensional and not all actors in society are best-equipped to handle its full realization.