After thirty years on the Albers faculty, Dr. Susan Weihrich is retiring.  Susan will be best known for what she most liked to do – teach her tax accounting courses.  Her students loved her and consistently reported that she somehow made tax fun and interesting.  She’ll also be known for how supportive she was of her students – very generous with her advice, time, and attention!

Susan was also a very supportive colleague, as many of our faculty and staff will attest.  And she liked to find a way to make things fun, which everyone always appreciates.

Susan was a tremendous supporter of the Seattle U mission.  Much of this was done out of the Albers School, but she even served as President of the SU Faculty Senate at one point.  Within Albers, her most impactful service was first as Chair of the Department of Accounting and then as Associate Dean from 2008 to 2016.

It was during this time that we worked most closely together, and Susan was very involved and very influential in just about anything that happened in Albers during that time.  She was an extremely hard worker and always interested in improving the way things worked in our school.  The downside for her was she had to put up with the dean at that time.  But she provided great advice to the dean, which prompted her to recently present him with this important reminder: 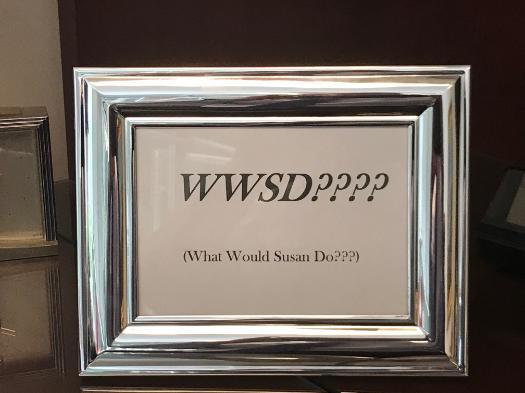 Which I would respond to by saying, “Gone, but not forgotten!”  Susan has left her mark on Albers and created an impressive legacy with all our alumni she has taught, mentored, and advised during the last three decades!