Jerry Stritzke, CEO of REI, spoke to a crowd of over 350 in the Albers Executive Speakers Series on January 19th.  Stritzke joined REI in 2013 after serving as president and COO of Coach.  Prior to that he was at Limited Brands and had leadership roles overseeing Victoria's Secret and Mast Industries, a Limited subsidiary. 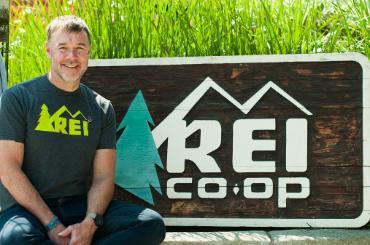 What do Coach and Victoria's Secret have to do with REI, an outdoor specialty co-op retailer??  Lots, if you believe in the power of brands!  Stritzke clearly believes that success in retail requires getting the brand right.   He said the brand must be about what you are for and what you are not for.  REI's "Black Friday" coup in 2015 was about answering both questions.  They are for getting outside.  They are against unrestrained consumerism.  The key to creating a successful brand is to create a community of like-minded people that love what you love.  Those would be REI's customers.

Stritzke noted that retail is in a massive transformation, with many firms not getting it right and going out of business.  He expects that to continue for the foreseeable future.  He said that purpose-driven companies have a competitive advantage, and the retailers that are successful will put themselves at the center of a community.  That is what is guiding the changes at REI since he joined the co-op.

The REI CEO offered that it had taken some time for him to understand what it meant to be a co-op.  A co-op is built upon a common passion, and is not about low prices and saving money.  The co-op structure allows the organization to focus on the long term.  So, for example, you will notice that REI owns more real estate than the typical retailer.   They will also be more focused on selling gear and equipment since those sales will result in a longer-term relationship with the customer.  Stritzke noted that a three-decade plus relationship with the customer is the norm for REI.

Stritzke closed his opening remarks to students with three suggestions.  Be Deliberate about learning, evolving, and transforming yourself.  Do not follow the path of least resistance when thinking about your professional career.  Second, Dream Really Big!  He never felt qualified for any job he had.  He approached the challenge as an opportunity to learn and made sure to surround himself with people who could help him succeed.  Third, Have Courage.  Know what you want, ask for it, and if you do not get it, do something about it!

In the Q&A, he was asked how to get noticed by an employer or supervisor.  His answer was to ask great questions and be a good listener.  He said that when he interviews job applicants, he notices the ones that asked the really good questions.

He was asked about the importance of organizational culture, and he admitted that getting culture right was the biggest challenge for a leader.  And he advised that before joining an organization, make sure you know something about its culture.

Stritzke noted that going forward, REI will be focusing on three strategies:

Be local -- in pushing strategies, remember there are differences based on location.  The great outdoors is different in Arizona than in Alaska!

Experiences -- REI wants to put greater emphasis on its travel business and introducing members to new experiences.  He noted that the best way to engage customers was around experiences, not product.  That makes for a much more loyal customer!

For All -- They want to emphasize that the outdoors are for everyone.  REI wants to make it inclusive and increase the diversity of its member base.

When questioned about REI's advocacy on the public policy front, Stritzke admitted that such initiatives risked alienating some, and it has to be looked at on a case by case basis, but at the end of the day, you have to stand for something, and some issues are just too important to stand on the sidelines for.  Two that he mentioned were taking a stand for LBGT rights and a recent letter penned with other specialty outdoor retailers on maintaining federal ownership of public lands.   He noted the latter was timed to support the nominee for Secretary of the Interior, Congressman Ryan Zinke from Montana, and to keep Zinke on the side of federal ownership.

When asked for an example of what had not gone so well in his relatively short tenure as CEO of REI, it was suggested the Reddit conversation about Black Friday was an example.  Stritzke agreed they had taken a hit, but the experience also disclosed some things they needed to address and got him thinking that he needed a Reddit like forum for his REI colleagues!

Another example that he offered was that his bias to do things fast had resulted in a website redesign that was not well done.  They did not take the time to figure out how they wanted to appeal to the customer.  The result was a new web presence that did not create a different customer experience.

When asked what he wished he knew when he took his first CEO position at the age of 39, Stritzke said he wished he had a better understanding that he did not know everything.  A successful leader needs to know that and listen to others in order to get the information needed to be successful.

These are tough times in retail, but Jerry Stritzke is helping REI swim against the tide and find success by focusing on the REI brand in a new way.  His focus on member experience and tapping into a customer community is serving REI well.   Branding is so hard to get right, and he provided our students with great insights on this important topic!