Outreach CEO Recounts How Company Had to Pivot 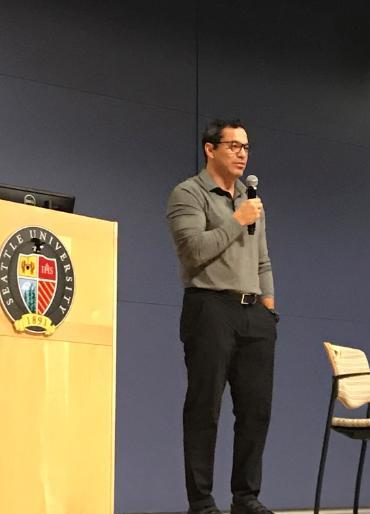 On the day he appeared on the cover of Forbes Magazine, Manny Medina, CEO of Outreach, visited the Albers Executive Speaker Series to talk about, “Navigating a Business Pivot: My Most Important Moment of Leadership.”  Outreach is a software that allows users to automate and streamline communication with sales prospects.  The company is in the midst of an incredible journey right now, including achieving “Unicorn” status.  That story is better told in the February 20th Forbes article.  Here, we will stick to the three key lessons Medina shared with our students.

To begin, it is important to know that Outreach started off as GroupTalent, trying to help employers find employees.  That concept did not work, and so the pivot was from GroupTalent to Outreach, and a completely different business focusing on helping sales teams.  That leads to Lesson One – the importance of what Medina calls, “Founder Market Fit.”  GroupTalent was able to build good product, but it could not monetize its product – the demand was not there for it.

What they did find was that the software they were using for their own sales efforts seemed to be working well, so the pivot had to be from recruiters as customers to sales people as customers.  This leads to Lesson Two, which is to “Make Customers Your True North,” and listen to what their needs are to find out what they are willing to pay for.

As Outreach began to gain traction, it still behaved as a start-up with scarce resources, and was still in bootstrap mode, not wanting to hire new people and instead asking the existing employees to work harder and harder.  Medina said it is an aversion to risk that will not allow you to keep up with growth.  This leads to Lesson Three – “Overcome Self-Limiting Beliefs.”  You have to set aside past behaviors and start thinking ahead and planning for growth.  You have to move from day to day resource scarcity thinking to “Need to hire now for next year!” thinking!  You must shift to being proactive and anticipate needs.  If you don’t, you will not be able scale the organization.

In the question and answer that followed, Medina was asked to weigh in on how technology is impacting the workplace.  He definitely does not believe we will all be replaced by robots, machine learning, and artificial intelligence!  Rather, these forces are taking on the repetitive, less interesting aspects of work today, and they will allow for more creative work in the future.  He gave the example of chess, where artificial intelligence has seemingly surpassed the human competitor, but if you move on to “Free Style Chess,” where people are competing with each other and using computers as tools, we have opened up a new arena that was not there previously.  It’s man/woman/machine versus woman/man/machine and teams are allowed!  This is also true in his domain of sales.  Machines will do some of the less interesting work, allowing sales people to do more creative and interesting work!

When he was asked about advice for students, he said don’t feel like you have to drill down and focus on going deep with something.  Rather, be open to trying all kinds of things and take advantage of opportunities to do that.  Also, don’t be afraid to change plans.  Just because your original plan was to go to medical school and that is what you told your parents, don’t be afraid to become an economics professor (not his example, mine!).

He was also asked that, since he was once an immigrant student, what advice would he give immigrant students today.  Medina said to avoid self-limiting thinking.  Don’t believe that because you speak with an accent, because you lack contacts and networks, etc… that you cannot be successful.  The key is come up with an idea that solves a problem, and that will get you the help you need.  In fact, he encouraged such students to present themselves as “up and comers” and turn your immigrant status into an asset.

Manny Medina’s visit to our campus was a great opportunity to learn from a leader at a fast-rising organization!  There is a reason he and Outreach were featured in Forbes!  It was a privilege to him come and inspire our students!