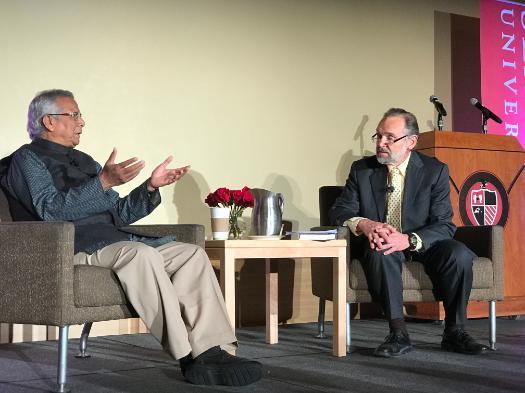 Born in the seaport city of Chittagong, Dr. Yunus studied at Dhaka University in Bangladesh, then received a Fulbright scholarship to study economics at Vanderbilt University where he received a Ph.D. in economics.  In 1972, he returned to Bangladesh to head up the economics department at Chittagong University.

Starting with Dr. Yunus' personal loan of small amounts of money to destitute basket weavers in Bangladesh in the mid-70s, grew micro-lending and the Grameen Bank.  From the Grameen Bank has emerged the Yunus Center and the Grameen family of businesses, which advance social business and poverty elimination around the world.

During his interview, Yunus explained the success of micro-lending -- giving poor women a loan to launch a sustainable income generating activity, expecting them to pay back the loan so the funds can be made available to someone else, using groups to hold people accountable, and keeping it simple with minimal documentation, bureaucracy, and legal oversight.

It is important to realize that Yunus is not advocating for the abandonment of capitalism.  After all, it is capitalism that generates the wealth that allows investors and donors to provide the start-up funds for social businesses!  However, he is saying we need to abandon our belief that human nature is all about being selfish!

Interviewer Dave Ross, a local radio personality, was skeptical of the model, wondering why investors would provide capital if there was no return.  Yunus reminded him of the significant charitable giving that takes place around the world, and that people are both selfish and selfless, and this model appeals to the selfless side of human nature.  A World of Three Zeros provides many examples of successful social businesses, so he must be on to something!

Ross noted that Seattle University was the first university to host a Tent City for the homeless, and asked what he would recommend the university do to solve the problem of homelessness.  He responded with what I will call the “Yunus Challenge!”  He said we should organize a Design Competition for our students, with the challenge being to create a social business to solve homelessness.  We need to respond to the challenge!

During the interview, Yunus did not have a chance to address the “third zero” – Zero Net Carbon Emissions.  But in the book, he takes up the issue of global warming and how the consequences of global warming will put a greater burden on the poor – those least able to absorb it.  He notes that since social businesses are not focused on profitability, they will have more degrees of freedom to produce goods and services in a more planet-friendly way.

It was an honor to be able to introduce Dr. Yunus to the audience.  After all, when is the last time I introduced a Nobel Prize winner?  Back in the day, I taught the International Economic Development course at Creighton University.  I remember discussing in class micro-lending and Dr. Yunus before the topic was in the economic development textbooks, so he is someone I have admired for a long time!

Seattle University was honored to host Muhammad Yunus on our campus and to learn how social businesses can help create a more inclusive economic system, one that provides more opportunity to all members of society!