John Williams, President of the Federal Reserve Bank of San Francisco, spoke at the Albers School about monetary policy on March 5th.  He was disappointed that there was not more time for questions from the audience, so he volunteered to teleconference with students on April 21st.  That morning, 25 Albers students and faculty gathered for a Skype conversation with Dr. Williams.  He was in his office in San Francisco.  We were in the Puget Energy Room.

He answered a few questions he had received in advance, then turned it over to students for more questions.  They asked about everything from how much work it takes to prepare for an FOMC meeting to how he would contrast the styles of the three Fed Chairs -- Greenspan, Bernanke, and Yellin.  It was a unique opportunity for some of our students, and we appreciate Dr. Williams wanting to make a return visit to Albers!  He is for sure the first participant in the Albers Executive Speaker Series to follow up with a Skype meeting! :)

Here is a picture of John Williams in his office Skyping with Albers students and faculty. 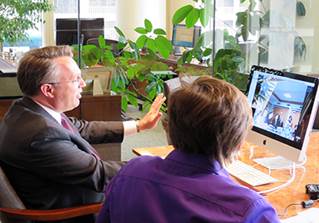