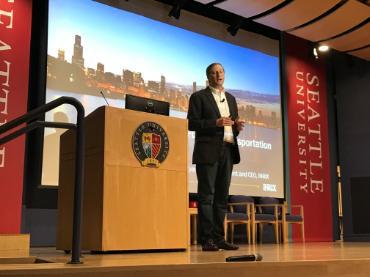 According to Mistele, the future of our transportation is all about ACES – Autonomous, Connected, Electric, and Shared cars!  It is these four trends in automobiles coming together to solve our multiple problems around congestion, safety, pollution, expense, and inconvenience.  The future Mistele sees is everyone getting around in electric, driverless, Uber-convenient vehicles.  In cities such as Seattle, with a fleet of autonomous vehicles operating on demand, we will not need on-street parking, parking lots, shuttle vans for the handicapped, gas stations, and no doubt a host of other things we take for granted.  Even public transit is in jeopardy of going away, according to Mistele.  None of us will need to own or lease a car.  The economics of this vehicle fleet will be too compelling.

Mistele illustrated how fast this scene is changing by noting that 12 years ago when INRIX was first launched, the state of the art for traffic reporting was the helicopter.  Of course, now it is the smart phone app powered by INRIX data, all facilitated by cloud computing and more powerful data transmission capabilities.

And it is not just cars that will be changing, but trucks, as well.  We are not far away from routine autonomous truck delivery.

Of course, autonomous driving and delivery will mean job displacement.  Truck drivers are in short supply compared to demand and labor costs are a very high component of total costs for companies such as Uber.  Autonomous vehicles will address the cost pressures, but what happens to the drivers?  Mistele responded that job displacement has always been an unfortunate part of technological breakthroughs.  In the past, we have shifted labor from one activity to another, but not without some difficulty for some.  In the case of Uber drivers, he sees the situation as slightly less fraught, since Uber has only been around for a few years.  It is not like someone who has been in a career for several decades and now the demand for his or her skill set is no longer there.

There were many business analytics students in the audience.  When asked what advice he would have for them, he was quick to say, “Get your hands dirty!”  Find out how the tools actually work and don’t be satisfied knowing about things in the abstract.

Mistele was asked how INRIX survives as a stand-alone company and does not get swallowed up by a larger tech player.  He responded that they must continually innovate the services they can sell.  They are not just about traffic apps.  For example, they can sell their data to companies who use it to do everything from decide on store location to learning if a competitor’s sales campaign was successful to understanding in-store consumer behavior.  And remember where all this data is coming from – signals coming from smart phones and connected vehicles, and every year there are more and more of both on the road.

He also noted that ACES is not a domestic phenomenon, but a global trend.  INRIX has customers in 60 countries, but he is seeing the most activity in North America, Western Europe, and China.  The changes he expects to see in the US should be happening at the same time in Europe and China.  Emerging markets will be slower to adopt ACES, but they are sure to experience it as well.

Bryan Mistele opened a lot of eyes and minds to future possibilities in transportation.  According to him, in just a few years everything will be coming up ACES!