Ben Bernanke, former Chair of the Federal Reserve Board of Governors, spoke on the Seattle University campus on October 15 th .  The event was sponsored by Town Hall and was part of Bernanke's tour promoting his new book, The Courage to Act .  He was interviewed by former Washington Governor Gary Locke.  The book is about how Bernanke led the Fed through the Great Recession.

Bernanke comes off as unpretentious, unflappable, and unassuming.  He seems like a guy who would be easy to get along with and is a baseball nut.  Most of what he said in the interview is probably in the book (I have a copy but have not read it yet), but there are probably a few things in the 75 minute interview that are not. 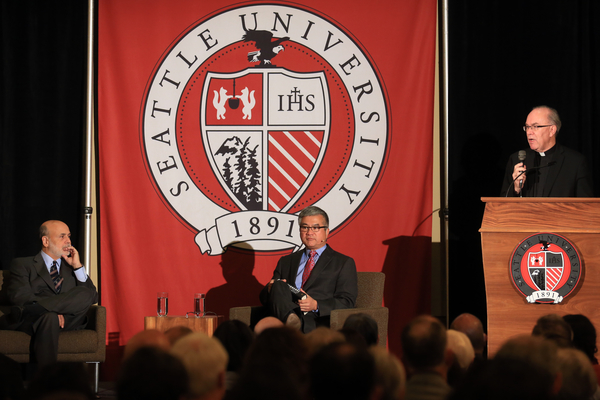 Locke asked some of the predictable questions.  Why bail out Bear Sterns but not Lehman Brothers?  Answer - Bear Stearns was not a bail out, it was an arranged acquisition and they could get no one to buy Lehman (it was too far gone) and they had no other strategies to deploy.  It was not a case of wanting Lehman to fail to teach the market a lesson.  It was a case of not being able to do anything about it.  Now that we have Dodd-Frank, there are other ways to handle this scenario that will lead to a better outcome.

Why assist Wachovia but not our local institution, Wamu?  Again, not the same situation, and in the case of Wamu, the FDIC and Chair Sheila Baird were focused on minimizing losses to the FDIC trust fund.  That is a different objective then stabilizing the economy.  Bernanke also admitted that JP Morgan got a sweet deal in the Wamu acquisition.

What about AIG - why bail them out?  Aren't they just an insurance company?  At that time, the Fed was concerned about the connections that AIG had with so many other firms.  A collapse of AIG would cause contagion across the system was what the Fed feared.  In this case, the government was able to lend funds to AIG to buy time for it to sort itself out.  The strategy worked and AIG is a going entity and has repaid its borrowings.

Bernanke also explained that the heart of the financial crisis was not sub-prime lending.  There was not enough sub-prime lending to take down the system.  The real problem was how the problems of sub-prime lending triggered investor panic.  Many financial institutions, including banks and investment banks, had become dependent on short term, uninsured borrowings.  Those funds abruptly dried up as lenders panic.  When liquidity disappeared, that threatened the many financial institutions that had grown dependent on that funding.  He claimed the Fed understood the possibility of a collapse of the sub-prime market, but did not see the contagion effect.

The former Fed Chair also argued that too much of the burden of economic recovery was placed on monetary policy, as very little was done on the fiscal policy side.  Congress could not come to an agreement on the appropriate use of fiscal policy tools, as right wing politicians balked at their use.  When the Fed did everything it could to drop interest rates, pushing short term rates essentially to zero, it was still not enough.   Thus Quantitative Easing became necessary, with versions 1, 2, and 3.

When asked why the resulting increase in bank reserves was not causing inflation, Bernanke explained that the banks are not using the reserves to increase the money supply, thus inflation is not rising.  Instead, the Fed is sterilizing the reserves by paying interest to the banks.  In essence, the banks are using the reserves as an earning asset rather than using them to make loans, which would normally result in an increase in the money supply.  This seems to be a little understood point by the media, most elected officials, and the general population.  Certainly any Presidential candidate who talks about imminent inflation is disclosing their ignorance and giving insight on their fitness for office!  If more of these folks would have taken a macroeconomics course, it would be easier for them to understand! :}

Bernanke also noted that the huge increase in the Fed balance sheet resulting from Quantitative Easing is not as scary as it looks.  He suggested the Fed's strategy would be to hold these securities until maturity, at which time they would leave the Fed's balance sheet (and Open Market operations would be used to offset any undesired change in bank reserves).  You want to know when the Fed's balance sheet will shrink - find out the maturity of those QE holdings!

While telling the QE3 story, he explained that as a known baseball nut he was invited to a Washington Nationals practice, and the manager introduced him to star outfielder Jason Wirth.  Initially, Wirth seemed unimpressed, but when the manager emphasized his role as chair of the Fed, Wirth surprisingly responded, "What's with QE3, anyway?"  I'll bet that story is in the book!

In the Q&A with the audience, Bernanke was asked if the repeal of the Glass-Steagall Act contributed to the Great Recession.  He replied that it did not and he did not think there was a need to reinstate a separation of commercial and investment banking.  For one thing, he said, if you look at all the institutions that experienced the greatest problems - Bear Sterns, Lehman Brothers, Wachovia, Wamu, Countrywide, etc… -- none of them were mixing commercial and investment banking.  Only Citibank could be said to have been doing both.  Moreover, some of the new rules in Dodd-Frank discourage the mixing of the two activities.

When asked if he could do it over again, what would be different, he expressed regret at not doing a better job of communicating with the public around why they needed to take certain actions, such as assisting large financial institutions but not assisting struggling Main Street businesses.  They tried, but just did not succeed.

When asked how the Fed should respond to financial bubbles, whether that is housing prices or tech stocks, he implied that the Fed should not be trying to pop bubbles.  Instead, it should forecast the worst possible outcome of the bubble and be prepared to address that situation.  A bubble is not likely to have large system wide effects because the impact will be concentrated on relatively few affluent investors and a particular sector of the economy.  It is a bit different with home prices, because there are so many home owners, but if a drop in home prices does not trigger investor panic, the down swing is likely to be manageable.

When asked what he was most concerned about in our economy, he said he was actually quite optimistic about our economy.  That said, his biggest concern was the growing inequality in income and wealth.  He noted it was long term trend that began in the 1970's and it was not a problem that could be turned on a dime.  It would take a number of years to fix, with improved education and changes to our tax and welfare system being the most obvious tools.

When asked if the large amount of debt held by China was a problem, he responded with a firm no.  That China is willing to hold our debt is a good sign, and they are doing it in order to manage the value of their currency.  He could have added it does not give them any foreign policy leverage over the US, in fact it is probably just the opposite.  Remember the old adage, "When you owe the bank a little, the bank owns you.  When you owe the bank a lot, you own the bank!"

He was also asked if US households were once again accumulating too much debt?  He said he did not and that households and business for the most part were being quite cautious.

Finally, he was asked about attempts to increase Congressional oversight over the Fed, such as the new audit that is being proposed.  He said the Fed already has plenty of audits.  The only thing this legislation wants to do that is new is to review monetary policy decisions, and that is just elected officials inserting themselves into monetary policy.  He noted, if you like the way the Congress has handled fiscal policy, then you should get them involved in monetary policy.  Not an inviting prospect for this audience.

I am a great admirer of Ben Bernanke.  Even with the benefit of hindsight, I think he did a masterful job as Chair of the Fed in navigating the Great Recession.  I don't like that firms like Goldman Sachs did not take a haircut with their AIG holdings, but maybe that was impossible to pull off.  And he continues to have the right take on issues.  Whether it is debt held by China, the repeal of Glass-Steagall, keeping Congress out of monetary policy, financial bubbles, or the growing inequality of income and wealth as our greatest challenge, I think he is on target.  It was great to have him on our campus!