Alan Mulally, retired President and CEO of Ford Motor Company and former CEO of Boeing Commercial Airplanes, has been appointed Senior Fellow in the Center for Leadership Formation in the Albers School at Seattle University.  In this capacity, Alan will be working with students, faculty, and alumni in our Executive Leadership and Leadership EMBA programs. 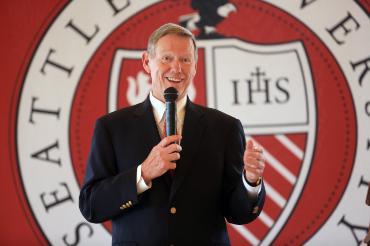 We are incredibly privileged to have someone of Alan's caliber working with us in this capacity!  He will be a terrific resource for our students, faculty, and alumni!  We are also extremely honored to be the first university at which Alan has agreed to take on a formal role since his retirement from Ford!

Both programs will be introducing into the curriculum key aspects of Mulally’s signature leadership strategies, including “Working Together” and “Business Process Review.”  According to Marilyn Gist, executive director of our Center for Leadership Formation, “These concepts are right out of our textbook for the Executive Leadership program.  Alan reviewed our curricula and found many commonalities from content and values standpoints, with what we teach.”

In a press release, Alan said, "I am excited to work with the Albers Center for Leadership Formation because its executive programs align so closely with my values. They focus not just on strategy and business tools, but on self-awareness and values of serving others.  Those are so important in building the genuine culture of working together to accomplish important goals.  It's an honor to work with the Center's leadership and to serve Seattle University.”

Alan spoke on our campus last October as part of the Albers Executive Speaker Series, and that was followed two days later with a day-long workshop for alumni, faculty and senior university leadership.

Our Center for Leadership Formation is home to Albers' Executive Education programs. It’s known as a center of innovation where top educators, alumni and business leaders join forces to help accomplished professionals become influential leaders in a changing world. The Leadership EMBA program is ranked 12th in the nation in U.S. News and World Report’s 2017 Top 25 EMBA programs and number one in the Northwest.

Marilyn interviewed Alan in the Fall 2015 issue of InSights, the CLF quarterly magazine. In it, Mulally talks about his leadership philosophy, the influence of his parents’ beliefs and values, and viewing mistakes as “gems” – opportunities to learn and grow.  You can read the interview in the online version of .