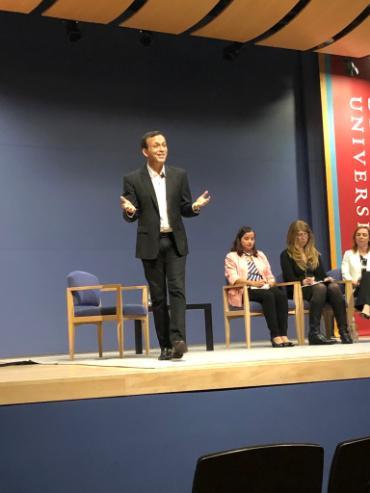 “Wanted: Contrarians, Disruptors, and Do-gooders” – now that is a provocative title, and the one Accolade CEO, Rajeev Singh, used in his visit to the Albers Executive Speaker Series in January!  The three descriptors coincide with three principles Singh urged students to abide by.

The Executive Speaker Series is a cornerstone event of the Albers School of Business and Economics. Since 2002, top business professionals from the Puget Sound Area are invited to speak on a topic of their choice, ending with a Q & A with a panel and the audience. This live event is open to the public.

Accolade describes itself as "a personalized health and benefits solution that dramatically improves the experience, outcomes and cost of healthcare for employers, health plans and their members". The publicly listed company is headquartered in Seattle, with offices in Pennsylvania, Arizona, and the Czech Republic.

Business Principle 1: “Know the Why”

You have to find out why you want to do what you do.  What is motivating you?  It is imperative to know.  Singh told his own “Why?” story.  He started out as an engineer, did not like it, and was poised to go to law school when he joined with his brother, Steve, and Mike Hinton on their start-up that became expense management solution Concur.  After a few months in Silicon Valley surrounded by a lot of other young entrepreneurs, his Why became, “I want to change the world.”  Everyone else in the Valley believed they were out to change everything and it was infectious.

Business Principle 2: "Who are you?"

What are your values and principles?  You will never be satisfied unless what you do is aligned with your values.  Singh said that in this era, great capitalists build businesses based on their principles and doing good.  His personal story on this was that in 1998 they became a public company and were fully into the dot-com bubble and then the bubble burst in 2001.  He’s convinced that only getting back to their core values saved the company, and that meant finding the right people and retaining them with a strong culture of shared values.  When you stay with your core values, major decisions are a lot easier to make.

Finally, those who link principles to action will ask different questions and they will continually ask those questions.  What conventional wisdoms does everyone seem to buy into that you question?  He’s trying to do that with health care.  Our health care system is broken, and the sector is built around cost control.  But if we were to frame it as getting people healthy, how would it look?

Here are a few other insights from his visit:

In a subsequent post alluding to his visit, Singh said: "A reframing of capitalism that marries shareholder returns with positive returns for humanity as a whole is essential. Entrepreneurs cannot wait for public policy makers to mandate that which we already know. We can do both - build businesses that attract shareholders and do good for the world."

Now that is a powerful and important message for our students!  It was such a great opportunity for them to hear from this inspirational leader who knows business is a force for good!

Joseph Phillips has served as Dean of the Albers School of Business and Economics at Seattle University since 2001. The school serves approximately 1000 undergraduate and 500 graduate students. Albers is distinguished by its focus on student success, commitment to ethics and social responsibility, pursuit of academic excellence, strong ties with the Seattle business community, and emphasis on preparing values-driven leaders committed to contributing to the Common Good.