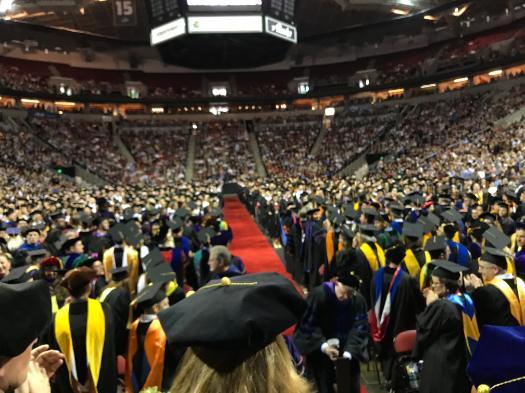 Seattle University’s 2017 Commencement took place on June 11th at Key Arena.  More than 2,000 students received their diplomas that day, including 333 undergraduate students and 305 graduate students from the Albers School!

Several Albers students received awards at the university level.  Maddy Lynch, business economics student, was one of four students to receive the President’s Award, presented to the undergraduate student(s) with the highest GPA.  Gus Orlando, graduating from our Master of Professional Accounting program, received the Provost’s Award, presented to the graduate student with the highest GPA.  We are proud of both of them and here is my view of the award presentation to Gus: 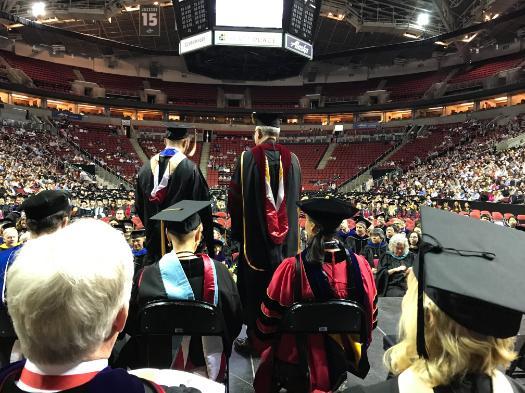 Another highlight was the first group of graduates from our MS in Business Analytics program!  Seven students were among the 305 graduate students receiving degrees.

Writer Sherman Alexie was the speaker at the undergraduate ceremony.  I especially appreciated his recognition of our international students and thanking them for completing their studies in the US.  He also reminded graduates how privileged they are to receive a degree from a school like SU and challenged them to make the most of the opportunities that presents to them.

Maggy Barankitse, a humanitarian from Burundi and previous recipient of the Opus Prize when it was awarded at SU, was the commencement speaker in the graduate ceremony.  She talked about her work in an environment of ethnic strife and challenged graduates to be as “crazy” as she is when it comes to addressing societal problems.

Graduation Day in Seattle University’s 125th anniversary year was a great celebration.  Congratulations to all our graduates!  We expect great things from you as leaders pursuing a just and humane world!