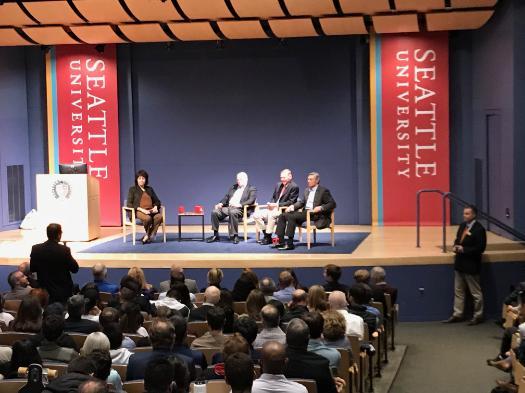 Three former Boeing Commercial Airline CEOs kicked off the Albers Executive Speaker Series for 2018-19.  Frank Shrontz, Alan Mulally, and Ray Conner collectively provided the leadership for Boeing’s work in commercial airlines for over two decades, spanning from the mid-1980’s to 2016.  Mulally also went on to serve as President and CEO of the Ford Motor Company from 2006 to 2014.

When moderator, Marilyn Gist, Associate Dean in the Albers School, led off with the question of what challenge they faced that particularly stands out for them, Frank Shrontz recalled the Boeing acquisition of de Havilland Canada.  While they were enthralled with the marketing possibilities of the acquisition, they did not pay sufficient attention to other issues such as relations with the Canadian government, and the move ended up being a failure.

Mulally recalled 9-11 and what that did to the commercial airplane market.  No one had imagined that a commercial airplane could be used as a weapon, and that changed everything about the industry.  The resulting drop in demand made for a rough ride for Boeing.

Connor offered that while most people would expect him to talk about the launch difficulties of the 787, for him it was Boeing’s move to change the retirement plan and linking that move to keeping 777x production in the Puget Sound.  They did not prepare the work force with enough information on why the change was necessary, and Connor realized that he had a major role to play in communicating about the need for change.  He also emphasized that when it comes to change, the executive team must lead by example.  The retirement plan shift should have started with executives, not the unionized work force.

The Albers School is blessed to have the Frank Shrontz Endowed Chair in Professional Ethics, currently held by Dr. Jeffery Smith, so when asked about ethics, Shrontz replied that integrity is the most important characteristic a leader can have.  It is more than complying with the law, said this attorney, but one must comply with one’s conscience and know to do the right thing.  Once you go over the line, it is hard to recover, and it takes just one bad decision to lose your reputation and even your career.

Conner was asked about China, and he said there is no way to overstate the importance of China to Boeing, as the demand for airplanes there will be immense.  Boeing is already a globally focused company, with over 80% of deliveries going overseas.  The current turmoil in trade policy must be watched very closely.  It is true that the US needed to change things up, he said, but in Asia the “How” is as important as the “What.”  The US will not achieve its trade agenda with “win-lose,” scenarios, which appears to be the current strategy.

When asked what they looked for to identify talent, a question that should be of interest to every Albers student, Shrontz said he valued integrity over skills.  Mulally said he expected technical excellence, but also the ability to collaborate and lead with humility and a service attitude.  Connor said he wanted to see how someone had overcome adversity and come out the other side better for it.  He wanted to see grit and passion.

When asked about the planned joint venture between Boeing and Embraer, Connor noted they had looked at Bombardier, but the match with Embraer is better in terms of culture and the approach to manufacturing.

On the question of innovation, Mulally said innovation is driven by the customer and listening to the market.  Key innovations such as the common cockpit, two engines instead of four, and long-range point-to-point capabilities (instead of speed) were all born in the market place.

Connor noted that one of the lessons learned with 787 was the need to take the same approach across the supply chain.  It does not work when you allow different units to use different tooling, software, etc… keep it similar and keep it simple!

These three men were asked if there will ever be a woman as CEO of BCA?  Connor said he is convinced it will happen sooner rather than later, and no one disagreed with that!

A question was posed about the robust Seattle economy and the presence and allure of tech companies here.  What would attract college graduates to Boeing?  Connor responded that Boeing was very much a high-tech company, and anyone with an interest in technology should be interested in Boeing!  The conversation then turned to the importance of keeping Boeing in Seattle and the Puget Sound region staying competitive in attracting and retaining businesses.  We need to make sure that the tax and regulatory environment does not discourage business activity.  A strong regional economy is not something we want to take for granted, the group said.

There has been a partnership between Seattle University and The Boeing Company for more than 60 years.  We have over 3,200 alumni who have been employed by Boeing, and we have three endowed chairs on campus established by Boeing.  Boeing hires our graduates, Boeing employees serve on advisory boards and as mentors to our students, and Boeing provides projects for our students to gain valuable experience with.  Boeing is a treasured resource for our university, and we were so privileged to have these three Boeing leaders on campus to share their wisdom with our students!