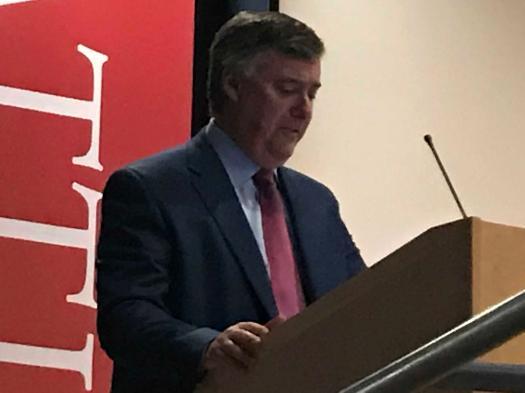 Kevin McAllister, President and CEO of Boeing Commercial Airplanes (BCA), participated in the Albers Executive Speaker Series on April 19th.   McAllister assumed his current position in 2016, and now oversees more than 60 percent of Boeing’s total revenues and a unit that has produced and services 12,000 commercial jetliners worldwide.  Before joining Boeing, he was president and chief executive officer of GE Aviation, Services, which capped a 27-year career at GE Aviation.

What we learned about Kevin McAllister is he is both a numbers guy and a sales guy.  With both his parents having PhDs in math, his focus on the numbers and data is not surprising!  He is focused especially on the power of analytics.  He believes it his great promise to improve product quality, make the supply chain more efficient, and gain better and faster insight on customer needs.  It’s no surprise to hear that he is putting greater emphasis on that at BCA.

At one point, McAllister was VP and General Manager of Global Sales and Marketing at GE Aviation, so he also knows a thing or two about selling.  His advice to students about sales came in several easy to remember sports analogies.  First, “Win in the off-season,” meaning have a really good product that meets customer needs and then get ready to sell it!  Second, “Hunt in a pack.”  Understand the customer and use that to put together the right team to serve that customer.  Know who the decision makers are, but also know who the influencers are.  Have the people on your team who can answer all the customer’s questions.  Finally, “Study the game film.”  Learn from every sales play.  Whether you win or lose the sale, you can learn something for next time.

Knowing his audience, McAllister offered up to our students some lessons he has learned.  First, covet learning and get ready to be a student the rest of your life.  Second, embrace teamwork and diversity.  Focus on the power of a team.  “I” people do not last long.  Diversity needs to be seen as a strength for the multiple perspectives it brings to a team.  Third, deliver on your commitments.  The ratio of what you say you will do and what you actually do needs to equal one!  Finally, be ready to challenge paradigms, but be able to do that in a respectful and reasonable way.

The Albers School was honored to welcome BCA President and CEO Kevin McAllister to the Seattle University campus.  He shared valuable insights with our students and it was a great opportunity from them to hear from this inspirational leader.  He’s just getting started, and it is clear some really interesting things will be taking place at BCA in the next few years!