Albers Hosts Jesuit Business Educators from Around the World

The Albers School hosted the 24th Annual International Association of Jesuit Business Schools (IAJBS) World Forum and the Colleagues in Jesuit Business Education (CJBE) 20th Annual Meeting.  The joint event took place on the SU campus July 21st to 25th and the conference them was, “Innovation for Sustainability.”  More than 180 participants from 51 schools across five continents and 17 nations were in attendance.

The first CJBE meeting took place at Seattle University in 1998, so we had the opportunity to welcome CJBE back to our campus for the twentieth anniversary meeting.  Fr. Spitzer, Paul Buller from Gonzaga, and Karen Brown, an Albers faculty member at the time, were instrumental in the launch of CJBE.  While Karen has passed away, we were able to recognize Paul and Fr. Spitzer for their role in creating CJBE, still a robust organization today.

While the IAJBS World Forum and CJBE annual meeting are normally separate, every four years the two organizations meet jointly in the US.  The last joint meeting in the US took place in St. Louis in 2014.

The opening address by Fr. Spitzer was entitled, “Catholic Social Teaching and Pope Francis on Free Markets and Sustainability.”  He noted that the Pope has been criticized unfairly for being anti-capitalist and going off in completely new directions within Catholic Social Teaching (CST).  In fact, as Fr. Spitzer demonstrated, Pope Francis has built upon the writings of previous Popes, particularly Benedict XVI and John Paul II.  He goes on to explain that Francis raises the same concerns about capitalism that CST has often raised, in particular “the seeming lack of ethical resolve to seek social inclusion, lessen the socioeconomic disparity among countries (as well as within countries), and ecological sustainability.”  Furthermore, when it comes to Laudato Si and a concern for the environment, Pope Francis is very much following the lead of Pope Benedict.

When Alan Mulally addressed the audience on the second day, he focused on leadership lessons learned from his Working Together strategies at Boeing and Ford.  Working Together has eleven key principles that create teamwork, transparency, and relentless execution that lead to a high functioning organization.  American Icon, written by Bryce Hoffman, vividly describes how this worked at Ford Motor.

Alan Mulally speaking at the conference: 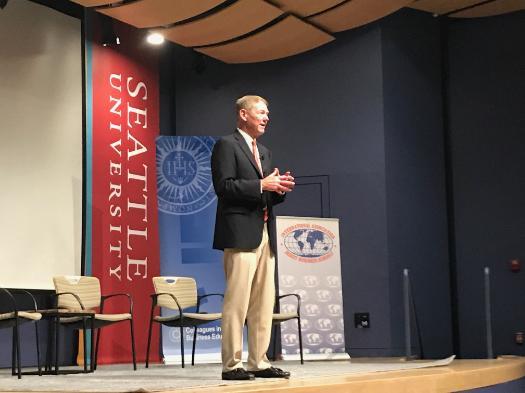 Fr. Michael Garanzini, SJ, Secretary of Higher Education for the Society of Jesus, also spoke to conference participants.  He provided an update of the inaugural International Association of Jesuit Universities (IAJU) meeting in Bilbao, Spain.  He linked IAJBS to that initiative and spoke about how IAJBS could contribute to the priorities of IAJU.

The conference featured workshops, panel discussions, and paper presentations around themes near and dear to Jesuit business education.  There was also an early evening wine tasting featuring six Washington wineries!  We wanted our guests to know about the fine wines now coming out of the state of Washington!

The closing dinner featured a musical walk down memory lane by KlapaDooWopella.  KlapaDooWopella is Seattle based and one of the world's oldest ongoing musical ensembles devoted exclusively to singing a cappella.  They organized their journey by drawing on music associated with US cities with a Jesuit university – Chicago, New York, Boston, Seattle, etc…  Now that was well received by attendees!

The closing event was a tour to the Boeing factory in Everett.  It was really cool to see four different airplanes (747, 767, 777, and 787) being built in the same building!

Some of our conference attendees visited the Boeing Everett plant: 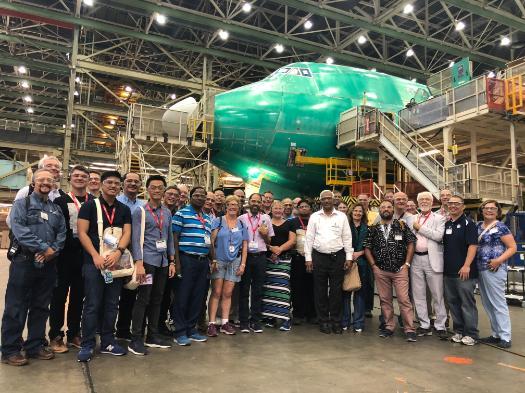 The 25th Annual IAJBS World Forum will take place at Xavier University in Bhubaneswar, India.  The next CJBE meeting will be at Santa Clara University.  Both events will be in July, 2019.

The Albers School and Seattle University were honored to host this event on our campus.  Our guests told us they had a great experience and we were happy to hear that.  I’m proud of how our faculty, staff, and students came together to put together this important event for Jesuit business educators!