Brandon Pedersen, EVP and CFO of Alaska Airlines, participated in the Albers Executive Speaker Series on April 20th.  The title of his presentation was, “What keeps Alaska Air Going?”

In his capacity as Executive Vice President of Finance and Chief Financial Officer for Alaska Air Group, Pedersen oversees a long list of company activities, including finance, fleet management, accounting/tax, investor relations, financial planning, supply chain, and internal audit. Before assuming his current role in 2010, he served as corporate controller for seven years. Prior to joining Alaska, he was a partner at KPMG.  In 2015, Pedersen was recognized by the Puget Sound Business Journal as its “CFO of the Year” for large public companies. 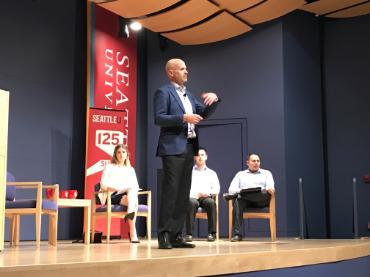 In his remarks, Pedersen emphasized the importance of long term sustainable growth for Alaska, growth that benefits customers, employees, communities and shareholders (and not just shareholders!).  What keeps the company going is a combination of five factors:

When they looked out to see where opportunities for growth were, the 40 million people living in California caught their eye.  Then it was a matter of do you build to serve that customer base or do you buy in to the market?  In the wake of the Virgin America merger, you know they decided to buy!

Virgin made sense because they had a loyal customer base and award winning service, similar to what Alaska can claim.  They had 60+ airplanes and they had gates in Los Angeles and San Francisco.  It would take a long time to grow into what Virgin already offered.

Of course, a successful merger is not easy, with the most difficult issue being blending Virgin America employees into the Alaska culture.  When asked how they have attempted to do that, Pedersen mentioned they held a “Values Jam” and emerged with five new values for the combined organization.  (Quizzed later on what the five were, despite having little time to memorize them, he managed to call them out – “Do the right thing,” “Own safety,” Be kindhearted,” “Be remarkable,” and “Deliver results!”)  They also held 20 “Momentum Sessions,” which brought together employees from both organizations to learn more about each other.

In the Q&A, Pedersen was asked what does Alaska need to be really good at doing?  His answer was, “customer service.”  They are trying to provide value at a good price, or as he put it, to provide a “Costco feeling” to the customer.  They are not trying to be the low price provider, but looking for the right combination of price and quality experience.

When asked about Alaska’s relationship with Boeing, he noted that when you are a smaller organization (6% market share), partnerships are extremely important to you, and the three most important partnerships for them are with Bank of America, General Electric, and Boeing, with Boeing being the most important.  They make a great airplane (the 737) and they have great people to work with.

Another question was about Delta’s big move into Sea-Tac, and how was Alaska responding to that challenge?  He said that when Delta first decided to replicate the Alaska network, the initial reaction was panic, but then they realized that competition was good and would make them a better organization providing a better customer experience, and that is what has happened!

Back to the merger, he was asked about the challenges of having a mixed Boeing/Airbus fleet that results from the Virgin America merger.  Pedersen reminded that there are advantages and disadvantages to each, and there was no need to rush into a decision about returning to one fleet or retaining a mix.  The Airbus planes are leased and come off lease in the 2021 to 2024 time period.  He also explained their move to the Embraer 175 for regional flights to smaller markets.   They have found it to be a fabulous plane offering a much better flight experience to the customer.   Regional flights used to be offered under the Horizon brand, but they decided to phase that out and go to market with one brand as they expanded into California.  The Alaska brand is not so well known there and two brands would be too confusing to consumers.

Several times throughout the presentation, Pedersen stressed the importance of not overinvesting in equipment (airplanes), and particularly not getting carried away during periods of profitability.  The industry has a history of getting carried away during the good times, and the last few years have been good years for air carriers.  Listening to him, you are convinced that Alaska is not in the process of repeating that mistake!

Brandon Pedersen gave a lively and informative presentation to our students!  You could tell that Alaska is highly respected by the audience and it is great to have them as our home town airline!