Alan Mulally, retired President and CEO of the Ford Motor Company, recently spoke to students in the Albers School on the theme of, "Strategic & Operational Leadership and Working Together."  There were nearly 350 in the audience on October 28th.

Mulally's prepared remarks largely followed themes in the book American Icon, by Bruce Hoffman, which chronicles Mulally's work to get Ford back on its feet after the Great Recession. Mulally served as President and CEO of Ford Motor Company from 2006 to 2014.  Through his One Ford plan, he led Ford back to being a leading auto company worldwide and number one in the US market.  He is also widely recognized as the Detroit CEO who did not go to Washington DC to borrow money during the Great Recession.  Judging from the audience reaction to that fact, it is an important aspect of his reputation today as a successful business leader!

Prior to Ford, starting in 1969 Mulally worked at Boeing, where he rose to become Boeing Executive Vice President and President and CEO of Boeing Commercial Airplanes before leaving to take over Ford.  Throughout his career, Mulally has been recognized for his industry leadership, including being named by Fortune Magazine  as #3 among the "World's Greatest Leaders" and one of the "World's Most Influential People" by Time Magazine.  Currently he serves on the boards of Google and Carbon3D.

Mulally addressed some of the difficulties he faced when he joined Ford.  One major problem was that the company had become very regionalized, with divisions around the globe divided by geography, and this prevented the company from creating economies of scale.  A second problem was a culture of hiding problems.  When he introduced his green-yellow-red spreadsheet review system, and the company was poised to lose $17 billion, all the items were coming in "green," meaning everything was on track.  But of course, it could not be.

Over time he worked to reshape the culture and get people to work together.  Later in the Q&A, he noted that leaders set the culture and it is one of the most important things they do.  He shared with the audience the culture he wanted to establish at Boeing and Ford: 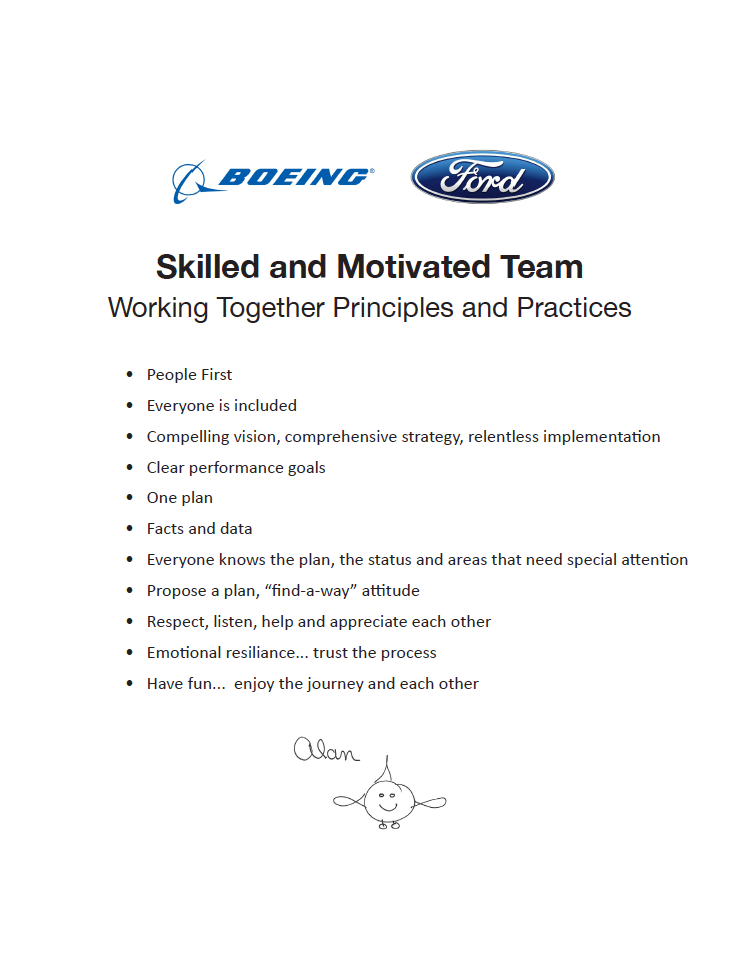 The key for him is that the leader must create an environment where everyone is working together.  Not only does the leader need to lead by example, but also must be quick to call out those who are not respecting the principles.  He said that leading is like gardening, taking good care of your people like you would take care of your plants.

One of the most important reflections of the night was successful leaders move from "I to we" and "Me to service."  Those six words are very powerful and so consistent with what our students hear from us!  Leadership is about how you are enabling others!

It is also clear that Mulally's success as a leader is very much tied to the business plan and the business plan review (BPR) process.  The BPR brings everyone together frequently and is an important tool for accountability and transparency.  It also is a mechanism for people to help each other identify and fix problems, and so is an important part of "Working Together."  It lets everyone know what is going on and gives everyone the opportunity to contribute.  In answer to a question about responding to unexpected events and shifts in the environment, Mulally noted the BPR is the perfect tool for responding.  Updates are a routine part of the process.

When asked if he had any suggestions for achieving work-life balance, Mulally said he thinks of a diagram with many overlapping circles that represent family, work, community, faith, etc… that sit inside a larger circle that he labels as "One Life" and "Life's Work."  Those smaller circles overlap and compete and you must figure out what is important to you.  Then look at your calendar.  Are the priorities on your calendar?  If not, start scheduling accordingly!

I told him afterwards that I like that diagram because it aligns with my view that it is not about work-life balance, it is about work-life integration  and how to make what is important to you fit together.

He then told the audience about the "family meetings" they used to have in the Mulally household every Sunday, which were really BPRs.  There were certain rituals built into those meetings, one being that everyone came in with their schedule for the week.  Then they figured out how they were getting to ball games, music lessons, dance class, etc… and he was able to put that into his calendar!  Apparently, the kids complain bitterly about those meetings today, but he says they hold their own family BPRs now!

Alan Mulally is arguably one of the most successful business leaders of our time.  His awareness of the importance of culture and teamwork, combined with his ability to establish a compelling vision and plan and execute around that, while tying that all together, is really very distinctive.  This made for a compelling and inspiring evening for our students!