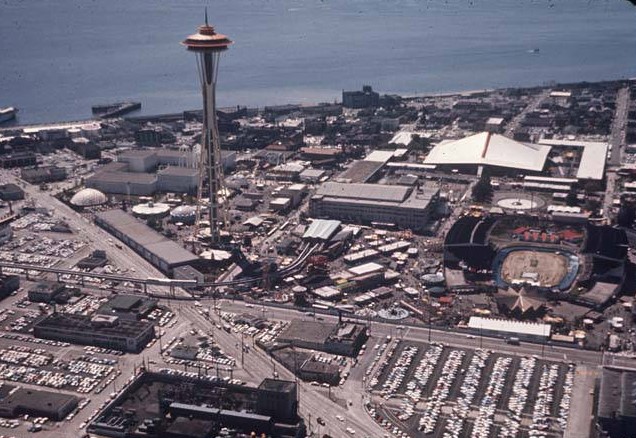 This aerial view is positioned west of the Space Needle, which is an observation tower, and was built in the Seattle Center for the 1962 World's Fair.

The World's Fair venue transitioned to a City of Seattle-managed community arts and culture campus in 1963. Many of the current structures on the campus still date back to the World’s Fair, while more than $860 million has been invested into Seattle Center since 1990. Seattle Center is known for being the home to large scale events and festivals such as Festival ‘71/Bumbershoot, Northwest Folklife, and the Festál cultural festivals. The campus is also the location of multiple arts venues and organizations, including (as of 2021) the Cornish Playhouse, KEXP, Seattle Opera, Pacific Northwest Ballet, Seattle Children’s Theatre, Seattle Repertory Theatre, The Vera Project, Chihuly Garden and Glass, and the Museum of Pop Culture (MoPOP).