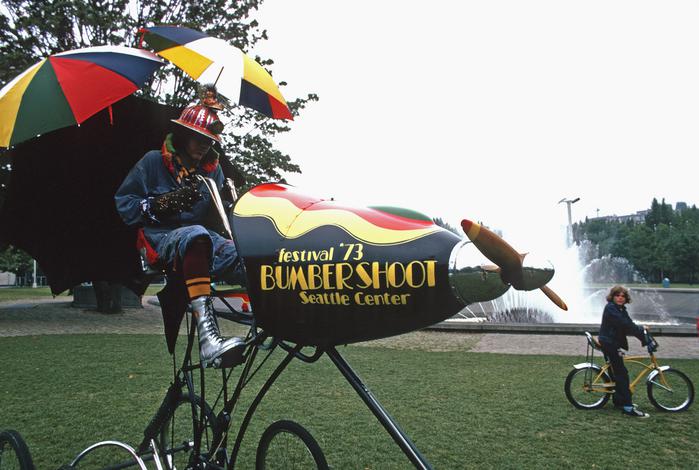 Bicycle decorated with an airplane nose and signage for Festival '73 Bumbershoot at Seattle Center.

The first event to make use of the entire Seattle Center campus after the World's Fair was Festival '71, also known as the Mayor's Arts Festival. In 1973 the annual festival became known as Bumbershoot and in 1976 it was moved to Labor Day weekend. Bumbershoot has been produced by One Reel since 1980, which is also the first year that admission was charged for the festival. Over the years, Bumbershoot has hosted major local, national and international music acts. However, after conflict over ticketing prices and fluctuating audiences, Bumbershoot partnered with concert company AEG from 2015 to 2019 to help them pay existing debts and to manage the booking of their music acts. As of 2021, Bumbershoot has partnered with Seattle Center to form the Bumbershoot Exploratory Committee in order to plan for a sustainable future for the event.