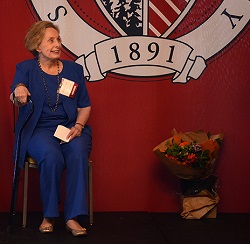 The Master of Nonprofit Leadership Program was founded in 1994 as one of the first graduate programs in the United States focused on the professional education of nonprofit leaders.

According to founding Director Mary Stewart Hall, the formation of MNPL was a collaborative process.  In the late 1980s, a group of charitable donors and nonprofit leaders came together for the Washington Gives campaign, a four-year initiative designed to strengthen the state’s voluntary organizations by encouraging an increase in giving and volunteering.  The campaign became the first statewide forum to explore significant nonprofit sector issues, including the need to improve the quality of education and training opportunities for leaders of nonprofit organizations.  The campaign also identified the need for an academic program serving the Pacific Northwest’s nonprofit sector.

In the early 1990’s, Dr. Hall gathered an advisory committee of twenty-six prominent nonprofit executives and charitable giving organizations to launch an assessment of the need and feasibility of a nonprofit master's degree program.  The Weyerhauser Foundation, where she was President, loaned her time to Seattle University to oversee the study.  Over the course of two years, she and the committee held 11 focus groups and spoke with more than 1000 civic leaders across Washington.

Using what they learned, Dr. Hall and the committee identified the core competencies needed for Executive Leaders in the nonprofit sector, and developed recommendations for a program of study at Seattle University.  The advisory board of the SU Institute of Public Service endorsed the recommendation to create a master’s degree that would focus on nonprofit leadership, which was approved by Seattle University in late 1994.

The first cohort of graduate students began their 16-month program of studies in August of 1995 and graduated in December of 1996.

For 25 years, the Graduate Programs in Nonprofit Leadership at Seattle University have been preparing leaders for "a more just and humane world". Thank you for your support and joining us to celebrate 25 years of Nonprofit Leadership at Seattle University on October 11! We had an exciting event and were thrilled to honor the ENGAGE, ADVOCATE, and IMPACT .