Message from the Field Director

Welcome to Seattle University’s Social Work Department Newsletter! This newsletter was created to provide the latest news in social work education, upcoming events related to social work, and professional guidance to help launch social work careers. This newsletter will also highlight students’ experiences in the program, as well as their impact on vulnerable communities through field practice. It is my privilege to introduce the launch of the Spring/End of Year 2021 Newsletter of the Social Work Department. Enjoy!

On April 13, the university announced that all SU students—undergraduate, graduate and professional—will be required to receive the COVID-19 vaccine and report it to the university prior to arriving on campus in the fall. Read more here »

Read the latest COVID-19 guidance from the university here. 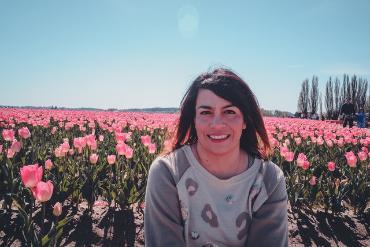 Meet Elizabeth Vargas; Elizabeth is a graduating Bachelor of Social Work (BSW) student at Seattle University. During her time in undergrad, she has been a recipient of the Messina and Alfie scholarships, a member of multiple on-campus honor societies, and a President’s List recipient. In addition to this, Elizabeth worked at Catholic Community Services within the Rapid Rehousing and Keeping Families Together Program for her BSW practicum. Elizabeth will be continuing her social work education next year in Seattle University’s Master of Social Work Advanced Standing Program. She is excited to complete her practicum at Consejo Counseling and Referral Service, where she will have an opportunity to work within the Latinx community. 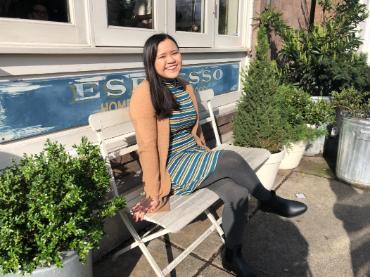 Meet Jamie Vo; she’s an alumnus of Seattle University holding a Bachelor of Arts in Psychology and Criminal Justice. Currently she’s a Master of Social Work student preparing to graduate this June.

During her time at Seattle University, Jamie has been a strong advocate for racial equity and mental health services on campus. She is a First to Soar Mentor, Practicum Advisory Board Representative, Student Peer Research Consultant, and so much more.

The Seattle University community will surely miss her presence, but we are so excited to see the impact she will make in her professional career. Jamie looks forward to getting her LSWAIC in June and continuing to provide counseling services at a community mental health center. She’s passionate about working with the Asian and Pacific Islander community and is hopeful that she will continue working with this population in the future.

A heartfelt congratulations to you all! You have worked so hard to get to this point of completion especially with the added strain of the pandemic. You have persisted and persevered.

From that moment when you declared SW as a major, you were committing to a profession that at its heart, values and advances social justice and social change.

You have deeply engaged in Seattle University’s BSW education that focuses on community-based generalist practice with an anti-oppressive practice lens. You have gained the knowledge, values, and skills to

I would like to acknowledge several of your colleagues who have earned the following departmental awards: 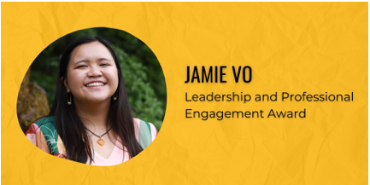 As students of this program know, the MSW program is a highly demanding program that involves completing 66 credits of courses for 2-year students, and 39-credits for Advanced standing students, while completing a rigorous field practicum program. This is a big commitment that takes rigor and persistence.

And the past year and half was further complicated by the pandemic and its many continuing consequences. No one had any idea when you started this program what our world would be like today.

And you showed all of us, and perhaps most importantly to yourselves, that you kept your purpose and rose to meet whatever the challenge that was thrown at you.  You indeed stepped up, and I applaud you for that.

Now, Class of 2021, you are ready to embark on a new journey as professional social workers in an environment that needs you more than ever.

This, my new colleagues, is the most important time for social workers to be clear about our mission, our purpose. Now as you are ready to join the profession, I am thrilled to see that you are ready for that.

Class of 2021, welcome to the social work profession. Congratulations!

Ignite Change! May the force be with you.

Learn more about your Social Work faculty! This quarter, we interviewed Dr. Joseph DeFilippis, Associate Professor in the Social Work Department. Read the full interview below: 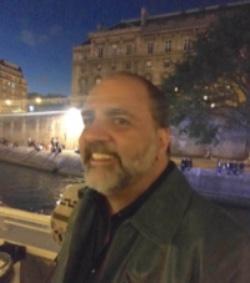 Can you tell me more about your area of social work?

My social work practice has focused on community organizing and public policy.

What does your social work practice look like outside of teaching?

I spent over 15 years of practice in community-based work. In the 1990s, I spent years doing volunteer work as a welfare-rights organizer, and from 1999-2002 I served as a member of the Steering Committee for New York State’s Welfare Reform Network.  From 1999-2003, I was the Director of SAGE/Queens, an organization for LGBT senior citizens.  The program primarily served to provide community and socialization for a population that was often isolated, but also provided clinical services and engaged in political advocacy. I also served as a member of the Steering Committee for the NYS LGBT Health and Human Services Network (1995-2005) and the Queer Economic Justice Network (1999-2003).

What classes do you teach?

My teaching at Seattle University focuses on social welfare policy and on social justice. Before coming to Seattle University in 2015, I spent five years in Portland, Oregon getting my PhD at Portland State University. While there, I taught numerous courses on public policy, family law, and sexuality.

From 2003-2010, I served as an adjunct faculty member in social work programs at Fordham University, and Hunter College School of Social Work, where I taught various courses in political economy, social justice, social welfare policy, community organizing, and sexuality. 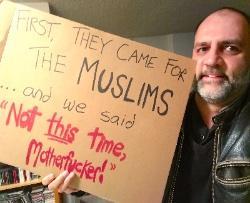 Are you working on any research right now?

I am working with another researcher and a filmmaker on a six-part documentary podcast about the organization I founded (Queers for Economic Justice).  I am also working with SU’s Dr. Hye-Kyung Kang on a book about how we build a social-justice focused clinical social work program.

I have published numerous articles, on a range of issues, including LGBT communities, poverty, marriage politics, and feminist research. I am one of the primary authors of the infamous 2006 “Beyond Same-Sex Marriage” (which publicly critiqued the direction of the marriage equality movement), and one of the editors of “A New Queer Agenda” published in 2012 by the Barnard Center for Research on Women.   And in 2018, Routledge published a series of three books that I co-edited: 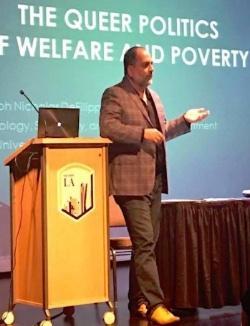 How long have you been teaching at Seattle University?

What inspired you to begin teaching?

In my activism and community work, I often organized public education events. “teach-ins”, and community forums, and I always enjoyed teaching, so it was a natural evolution for me.
But specifically, it happened this way:

In 2002, I did a two-hour training for activists, teaching them how to conduct lobby visits in Albany (New York’s state capital).  Two weeks later, I got a phone call from one of the people who had taken the training.  She was an instructor at Fordham University, and said she loved the lobby training I did, and asked me if I would be interested in applying for a job teaching a policy class there. I said yes, got the job, fell in love with teaching, and never looked back.

I taught as an adjunct (in addition to my full-time non-profit work) for eight years, and loved it each time. So in 2010, I left NYC to begin a PhD program, specifically so I could teach full-time. In 2015, I got my PhD and started teaching at Seattle University. I just got promoted and tenured, so I hope to be teaching for the rest of my life.

Interested in doing some social work reading? Check out our Faculty Reading List! Each selection has impacted or helped to shape one of our faculty members' careers.

Topics range from the unexpected highs and lows of graduate school to a recap of an MSW Licensure Information Session. Check out the blog here!

Interested in earning your LASW or LICSW? Check out the information below:

What is the benefit of earning a social work license?

Social work licensure in WA State is relatively new, but the number of jobs requiring licensure has been steadily increasing. Many WA State MSW level positions in health care and mental health care require licensure. Social work practice positions requiring associate licensure (LSWAA or LSWAIC) often have higher starting salaries than those that do not, and full licensure (LASW or LICSW) usually comes with a pay increase, and in certain settings, regular hourly pay differentials. Licensure opens the door to utilizing advanced social work practice skills and filling additional roles. For example, with a license you can provide certain types of therapy and supervise others.

What is the difference between a WA State LSWAA, LSWAIC, LASW, and LICSW?

The LICSW is an independent clinical license and the LASW is an advanced generalist social work license. The LICSW allows one to engage in clinical practice, such as therapy, independently, while the LASW allows one to do things like advanced administration in organizations or working on a team in a health care setting providing social work interventions. The LICSW requires 4000 hours post-MSW of supervised, direct social work practice with clients and the LASW requires 3200 hours. Upon completion of the hours, one must pass an exam, the Association of Social Work Boards (ASWB) Clinical Level Exam for the LICSW and the Advanced Generalist Level Exam for the LASW. The LSWAIC and LSWAA are associate licenses you can apply for on receiving your MSW, under which you will work for your supervised hours to fulfill the requirements for the LASW and LICSW respectively.

What advice you would give for MSW students and new grads regarding licensure?

Tips from the 2021 MSW Licensure Workshop

Each year, the MSW program hosts a licensure workshop for current students. Representatives from the Washington State Department of Health attend to present information and answer questions about the licensure process. Check out our April 2021 MSW Student Blog to read some takeaways one of our students gleaned from the workshop.