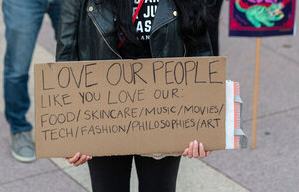 From the Seattle Times:

It shouldn’t have to take a mass murder for my fellow Americans to take notice. Anti-Asian racism and violence are real and have a long history in the United States. The mass murder of Asian women in Atlanta is just the latest horror in the history of violence against Asian Americans that reaches as far back as the racially motivated massacre of Chinese immigrants in 1871 in Los Angeles.

Asian American women are particularly vulnerable and targeted due to the triple jeopardy of racism, colonialism and misogyny. When I read the news headlines yesterday of “Eight murdered in Asian Massage Parlors,” my heart sank, not only from the sheer tragedy of the murders but also from the phrase, Asian massage parlors. I knew where this was going. As the reports repeated the phrase, Asian massage parlors, Asian women victims were rendered only as sex workers, or even immoral temptresses, devoid of humanity. And that sickening thought was confirmed when I saw follow-up news headlines where the suspect was portrayed as a “sex addict” who “patronized the same parlors.”

Reading those headlines, my mind flashed back to the March 1995 murder of Susana Blackwell, her unborn child, and her friends Phoebe Dizon and Veronica Laureta, at the King County Courthouse. On the morning when the story broke, news outlets reported the murders as a domestic violence killing. But by that afternoon, the narrative made an ugly turn. It was no longer a story about an abusive husband killing his estranged wife and her friends but rather about an Asian “mail-order bride” and her “duped husband.” The headlines included: “Mail-Order Wife Killed by Spouse at Courthouse” (The Washington Post); “Man Kills Pregnant Mail-Order Bride in Courthouse” (AP); and finally, “Murder Suspect said Wife Duped Him from the Start” (The Spokesman-Review).

The Asian women victims were no longer humans who deserved life; instead, the white male perpetrator was humanized as a victim of a “scam.” The notion was that since the white male perpetrator married an Asian “mail-order bride,” she owed him her life in domesticity even though he was abusive to her. These stories robbed Susana Blackwell of humanity; she was a purchased object that the buyer could use for whatever he wanted, including sexual servitude. There is a chilling parallel between this narrative of an Asian woman from a former U.S. colony and a white American man and the history of Western colonizing nations taking, using and debasing everything that belong to their colonies, including human beings.

The dehumanizing narrative of Asian women is nothing new. The confluence of racism and misogyny sexualizes and objectifies Asian women as a victim and a temptress. The Page Act of 1875, which prohibited the immigration of unfree laborers and women brought for “immoral purposes,” specifically named Chinese women. In the 1900s, Chinese women were accused of being prostitutes spreading the “unique, Chinese strain” of syphilis that infused “a poison in the Anglo-Saxon blood,” Iris Chang wrote in The New York Times on May 21, 2003, in an article titled “Fear of SARS, fear of strangers.”

In popular culture, Asian women are portrayed as colonial sex objects who literally sacrifice their lives to serve white men who refuse to see them (“Miss Saigon,” “Madame Butterfly”). Until very recently, nearly all Hollywood films that had Asians almost always featured Asian women as wordless rape victims of a war. Asian women’s lives are rendered cheap like the low-wage jobs that we often occupy: domestic workers, nail-salon employees and cleaners. For the most part, we don’t even exist, on screen, in textbooks or in the national consciousness.

These narratives matter. The most potent weapon of anti-Asian racism is erasure — of our voice, our presence, our humanity. It shouldn’t take a mass murder to take notice. But this is an opportunity to change the narrative. How to fight against anti-Asian violence? Hold our society accountable for the racism, colonialism and misogyny that render such violence possible. And put our lives at the center. Let us tell our own stories.