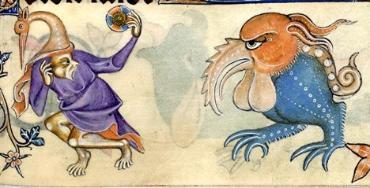 The medieval western European Christian past is being used as a weapon by extremist violent supremacist groups such as white nationalists, the KKK, and Nazi extremist groups to promote a false picture of medieval Europe as free of prejudice. But that image of the past is a fiction, a tyrannical construct, and a dangerous fabrication that distorts the real lived experiences of people in the Middle Ages and seemingly gives permission for people today to use the past to excuse present-day prejudices.

We will critically examine six crucial debates in African American history since 1895. These debates continue to impact not just the African American and Black community but the entire nation. In certain respects, all of them are ongoing even if they are identified with a specific period in African American history. Through these debates we will not only learn much about the major figures and questions of the time, we will also grapple with questions of race, justice, equality and fairness that impact each of us as individuals and all of us as a nation.

At its broadest level the Senior Synthesis is intended to be a culmination to your education at Seattle University. In particular, as a capstone course for the History Department, it is intended to aid you in thinking about and integrating what you have learned over the course of your time in the department. In this manner, we will be completing your education in the major in the manner in which we began it: with a keen attention to questions of historical methodology and theory.

After a period of collective reading and discussion each student will work on an individual research project and write a paper. We’re using “culture” here broadly in the sense of the production of meaning1, but we’re particularly interested in tangible and visible forms of culture. Material culture such as textile, tiles, furniture, photographs and other forms of print culture, cuisine, fashion, film, sports, games, gardens, architectural styles and urban planning are all manifestations of culture, as much as forms of “high culture” such as paintings, classical music and literary works. We will be focusing on patterns of exchange—or cross-cultural influence—through trade, colonialism, missionary work, collecting, travelers’ observations and so on either within Europe or between Europe and Asia (Asia is broadly defined here to include “East Asia,” “Southeast Asia,” “South Asia,” “the Middle East,” “Central Asia” etc.), although students could potentially choose to focus on another continent.