Move Left: Thoughts on Some Progressive Election Victories You May Have Missed

As Election Night November 5 came and went, most of the focus was on big Democratic and progressive victories on the east coast. In Virginia, Democrats captured control of the state legislature, in Kentucky Andy Besher won the governorship, and in Loudon County Juli Briskman, who famously flipped off Donald Trump while on her bicycle, won election to the County Board of Supervisors. It was a good night for Democrats all around. 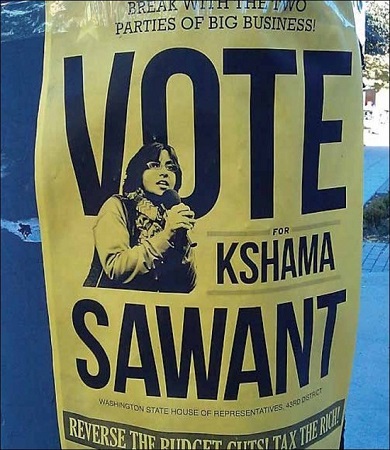 Out here on the west coast, however, there were a few key local races that have gone largely unnoticed and/or undiscussed. One reason why some of the important local races have fallen off the radar is because the all-mail-in ballots in places like Washington state mean that the outcome of close races is not determined until a few days after the election has passed. Another reason you may have missed this news is perhaps an east coast bias to the way news stories are processed. Finally, the very local nature of some of this west coast news may be one of the reasons why some of this news escaped notice.

I was following two important races on the west coast closely. The first was the campaign of Kshama Sawant for re-election to District #3 in Seattle’s City Council. Sawant is not a Democratic Socialist but an out-and-out Socialist. The second election I was following was Chesa Boudin’s campaign to become the District Attorney for San Francisco. Both candidates trailed their main opponents on election night. However, despite formidable and well-funded oppositions, over the course of the next few days, as all the ballots were finally counted, both candidates won amazingly close elections. It’s hard to say whose victory was more surprising. Each was important and vital in its own way for keeping intact and pushing forward a progressive agenda.

In and around Seattle, Sawant generates strong opinions. She is caricatured as strident, as someone who is hard to work with, as uninterested in the day-to-day of constituent services, and as someone who does not know how to play nice with others on the Seattle City Council, etc. I find many of these criticisms both sexist and racist…the idea that the nice woman of color should know how to be polite and play nice with the (male) adults in the room permeates much of the tone of these criticisms. But others, like Sawant is bad at constituent services, is just on the face of it, wrong and deeply disingenuous. Her constituents in District #3 have found her as responsive as any other council person or politican. This “news” article, by Joe Connelly (of the now fully online Seattle PI) on Sawant’s victory perfectly captures the disdain many in Seattle, even those loosely on the left, have for Sawant.

Sawant, who first won election in 2013, faced a strong and well-funded challenger in Egan Orion. But Sawant’s real challenger was Amazon, Vulcan Real Estate, and Puget Sound Energy. These companies poured over $2 million into Seattle City Council races, largely through unlimited donations to the Seattle area Metropolitan Chamber of Commerce, to fund challengers to the Emerald City’s left-leaning City Council bloc. Sawant, who unapologetically supported a head-tax on Seattle’s big tech companies, rent-control, a green new deal, a $15 minimum wage, taxing big businesses to create social housing, was perhaps the central target of this business-friendly political bloc. And while Sawant is a Socialist, she had the support of the 43rd District Democrats, the King County Young Democrats, the Sierra Club, Democratic Councilmember Mike O’Brien, and a host of LGBTQ activists.

The contest between Sawant and Orion, then, was also a contest about whether or not Amazon could throw its weight around and get the centrist or center-right, big-business friendly City Council that it wants. Amazon alone donated $1.45 million, through the Chamber, to its preferred candidates. In this context, Sawant’s victory was vital if for no other reason than to serve as a counterpoint to Amazon’s efforts. Even if you do not agree with some of her particular policies, Sawant’s loud and strident arguments for a range of left-leaning issues helps frame a local debate about possible solutions and alternatives and invariably pushes the discussion leftward in a more progressive arc. With Sawant on the City Council it means that left-leaning solutions to poverty, homelessness, health care, taxation, corporate responsibility, police accountability will get the full airing and discussion they deserve. Whatever your opinions are about Sawant, her victory, then, signals the continued strength of Seattle’s leftward political landscape and marks an important victory in standing up to both the influence of Big Tech and Big Real Estate development in the Emerald City.

The other race I followed closely this election cycle was the campaign of progressive Chesa Boudin for District Attorney of San Francisco. Like Sawant, you may have missed Boudin’s important victory because it wasn’t official until several days after the election. Boudin had to wait to declare victory as California’s Ranked Choice Voting (RCV) and as provisional and absentee ballots were certified and counted. In the end, he won a narrow victory over the establishment center-left Democratic candidate Suzy Loftus.

Boudin has a compelling biography. His parents were members of the leftist 1960s-1970s Weather Underground, a radical organization deeply against the Vietnam War. They were arrested, convicted, and imprisoned for driving the getaway car in a robbery in connection with their antiwar activities when Chesa was only 14 months old. His dad is still in prison in New York state. Boudin’s experience with the criminal justice system and mass incarceration, then, is personal and intimate. He knows how it operates and the toll it can take. Eventually, Boudin became a lawyer and, perhaps predictably, a deputy public defender for San Francisco. Here’s his great opening campaign ad.

Typically, across the country incumbents win, especially so in DA races. This race was unusual in part because the sitting SF DA had resigned, leaving the spot open. A competitive and fierce election ensued, pitting mainly Boudin against Suzy Loftus as the establishment Democratic choice. Loftus had the support of, well, like everybody in the Democratic Party in California. Really, check out the endorsement’s page on her website. It’s impressive. Loftus also had the endorsement of every major SF newspaper and the local Police Officers’ Association. The POA in particular spent heavily to defeat Boudin. When Mayor London Breed appointed Loftus interim DA a few weeks before the election, many saw this as an example of the mayor unfairly putting her finger on the scales in the upcoming election.

Boudin campaigned on a range of progressive criminal justice issues from eliminating money bail to ending racial bias in the criminal justice system, to reducing violent crime, and ending mass incarceration, to engaging in restorative justice practices (among many others). Boudin put ending the practice of mass incarceration front and center in his campaign and connected his work to the wider movement for decarceration just now picking up steam across the nation.

Boudin was fighting not just to reconfigure the way a District Attorney prosecutes crime but to reshape the larger narrative about how we talk about crime and punishment. Boudin’s campaign is, at its core, about what a progressive criminal justice system might actually look like. Like Sawant, Boudin’s presence as DA ensures that the conversations we will have about criminal justice issues will be anchored in progressive values. Also like Sawant, Boudin’s presence assures us that progressive organizations and policy solutions will have a seat at the table when solutions to pressing problems are being discussed.

Beginning in the late 1960s, signaled by the election of Richard Nixon, a rightward backlash against a broad range of sixties and early seventies’ liberation movements took root in American politics. Many of you already know the broad outlines of this story. The “tough on crime” and “law and order” rhetoric and policies, which merged with the Reagan-Era War on Drugs, anchored much of conservatives’ larger right-leaning politics and electoral successes. For far too long, Democrats have struggled to find ways to counteract the rhetorical appeal of being “tough on crime.” These rhetorical challenges have also meant that Democrats and liberals have struggled to locate policy alternatives outside of such conservative framing.

Boudin’s victory, then, is hugely important in this context. It is clearly now part of a larger campaign for an end to the policies and politics that have produced mass incarceration in America on an unprecedented scale. The election of public defenders who have promised to end mass incarceration and pursue other criminal justice reforms to the position of District Attorney, is one plank in this larger, bourgeoning movement. And on election night, this movement found success from Virginia to Philadelphia to Boston to Mississippi, and then, ultimately, to Boudin and San Francisco. As Daniel Nichanian for The Appeal explains:

And it’s not just Virginia. Elsewhere across the country, rural and suburban electorates voted to rethink the priorities of the local prosecutor.

In the Philadelphia suburbs, Jack Stollsteimer, a Democrat, beat a Republican DA on Tuesday and will be the next prosecutor of populous Delaware County. He proposed a 10-point and has advocated for deprivatizing the local jail.

In Mississippi’s comparatively rural southwest corner, Shameca Collins emphasized reducing incarceration while running for DA of the Sixth District (Adams, Amite, Franklin, and Wilkinson counties). She defeated Ronnie Harper, a longtime incumbent with a history of fighting reforms, in the August Democratic primary. She was unopposed on Tuesday. 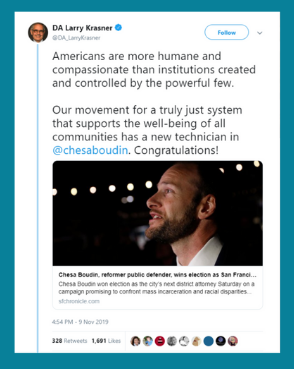 It was the election of prison reform advocate and public defender Larry Krasner to the Philadelphia DA in 2017 that kicked off this component of the decarceration movement. Now, the Progressive Prosecutor Movement is clearly a real thing. This new approach is challenging both the long-held “tough-on-crime” and “law and order” approach while pushing the Democratic establishment out of its comfort zone, further to the left. While Loftus had the support of the Democratic establishment, Krasner, along with other progressive politicians like Bernie Sanders, endorsed Boudin’s campaign. 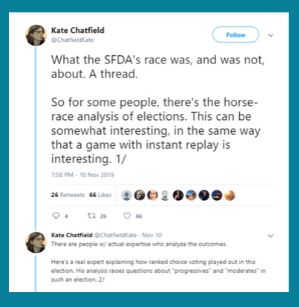 For a great thread on the politics of Boudin’s race and the impact of Ranked Choice Voting, see Kate Chatfield’s great twitter thread here:

These two elections, and the others like them, paint a sharp contrast to the national political conversation at this particular moment in time. Together, with the other electoral victories by Democrats on the east coast, they signal the leftward drift of our nation’s politics, a development obscured at times by the national conversation.

If you want to learn more about the deep history and roots of mass incarceration today, you could check out Dr. Kamerling’s book:
Capital and Convict: Race, Region, and Punishment in Post-Civil War America
(Charlottesville: University of Virginia Press, 2017)