Inaugurated in fall 2009, the B.A. in Film Studies has grown rapidly in film courses (30+), course enrollments, and majors/minors (93). While the degree requirements and curriculum are well-balanced between critical studies courses in film art and history, genre studies, international cinemas, great directors and special topics courses, and screenwriting and production courses, most students majoring in Film Studies aspire to careers in “the industry.” The B.A. program’s first tenure-track hire, Georg Koszulinski, is an accomplished and gifted filmmaker and he will assume leadership of our production team of part-time professional filmmakers. 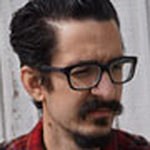 Professor Koszulinski is an award-winning filmmaker who has directed over 25 films, ranging from documentary and narrative features to avant-garde films and videos. His documentary, Cracker Crazy (2007), explores the history of slavery and exploitation in Florida from first European contact to the present day. Cracker Crazy earned numerous festival awards and was nominated for a Notable Video of the Year by the American Library Association. Immokalee U.S.A. (2008) documents the experiences of migrant farm laborers working in the U.S.A. and was widely programmed at universities and film festivals worldwide. The Documentary Channel acquired both films in 2009.

Edwin Weihe, director of Film Studies, also serves on the Seattle International Film Festival board. This year he visited with program directors at AFI and Chapman University’s Dodge film school. He attended SXSW, Tribeca, and SIFF festivals and forums. In November, he got out the vote in rural North Carolina. In spring 2013, Dr. Weihe received the College of Arts and Science’s annual Outstanding Teaching Award.