Performing Arts and Arts Leadership
College of Arts and Sciences 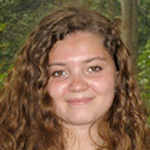 She has performed Shakespeare in prisons, with community theaters, and at the Lee Center on campus. Since her acting debut as Hamlet when she was 12, Amelia (Meme) Garcia-Cosgrove has been hooked on Shakespeare and theater.

“I had done 15 plays by the time I got to college,” said Garcia-Cosgrove '15. “Theater for me is not a hobby or a job but a way of life. It makes me a better person.”

When her local community theater on Vashon Island needed a sudden replacement for Hamlet, Garcia-Cosgrove was tapped for the role. She was just 12 years old, and Hamlet was her first play. She acted throughout her middle and high school years and came to Seattle University planning to get her BA in Humanities for Teaching. Within months, she joined the cast of Nora, Ingmar Bergman’s adaptation of Ibsen’s A Doll’s House, directed by Theatre Professor Rosa Joshi. She soon changed her major to Theatre and later added Women and Gender Studies as a second major.

The daughter of Seattle University alumni, Garcia-Cosgrove grew up speaking both English and Spanish. Two years ago, she spent time in Guatemala and El Salvador where extremely high rates of violence against women persist. Working with the nonprofit Asociacion Generando, she was part of a research team that conducted interviews with victims to help evaluate intervention and prevention services. From that experience, she developed a documentary theater piece, “Now at the Hour of Our Death,” which she presented at the 2014 conference of the National Association for Women in Catholic Higher Education.

In fall 2013, Garcia-Cosgrove moved to Boston for an internship with the Incarcerated Youth at Play program conducted by the Actors’ Shakespeare Project. Having toured with a King Lear production presented at the Monroe Correctional Facility and the Purdy Women’s Correction Facility, Garcia-Cosgrove was no stranger to working in prisons. At the Pelletier Assessment Facility outside Westborough, MA, she coached the prisoner-actors, helping them understand the text, practice their parts, and master complicated verse lines in As You Like It.

“I had been told as a teen that I wasn’t good enough for Shakespeare,” she recalled, “and yet I have now been in nine Shakespeare plays. Many juvenile offenders also have been told they aren’t good enough. Theater has the power to give people a chance to see beyond themselves, especially Shakespeare’s plays. They are based on the most human instincts, and his plays open us up to reflect on our own lives and struggles.”

After spending last summer performing in Twelfth Night with the Merc Playhouse in Twisp (and being evacuated when forest fires threatened the community), she returned to campus to appear in Love’s Labor’s Won, a sequel to Shakespeare’s Love’s Labor’s Lost, written and directed on campus by Scott Kaiser of the Oregon Shakespeare Festival. Immediately after she performed in Measure for Measure, produced by the Seattle Shakespeare Company.