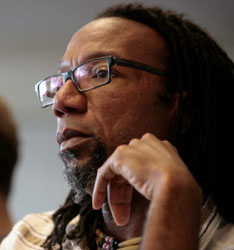 The highly anticipated four-part series by Rosette Royale, a 2010 recipient of a Seattle University Journalism Fellowship on Family Homelessness, was published in four subsequent issues of Real Change beginning Wednesday, May 9, 2012 in Real Change.

Rosette followed a homeless mother of a baby boy as she tried to find housing and dealt with the aftermath of meth use and domestic abuse.  The series took two years to research and report, during which Rosette also visited the baby's father, a white supremacist, in prison.

Rosette talked about the series on this podcast from KUOW's "Weekday" at 9 a.m. Pacific, Wednesday, May 9 (94.9 FM, Puget Sound Public Radio).