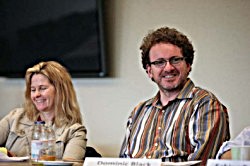 Dominic collaborated with Fellow Dan Lamont, who photographed the families as part of his project.

His research assistant was Sabine Bernards, at that time a Seattle University senior.