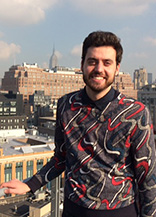 David Strand graduated in 2015, double majoring in Creative Writing and Visual Art. David plunged into his career immediately following his degree, as he started working full time at Seattle’s Frye Art Museum, during finals week of his senior year. Initially hired as a Curatorial Assistant, he was tasked with project managing the museum’s largest exhibition to date, Genius / 21 Century / Seattle, a celebration of exceptional multidisciplinary and collaborative artistic practice in Seattle, which featured over 65 artists.

For David, being an English major meant pushing his critical thinking faculties, honing his writing skills while expanding his understanding of both the possibilities and limitations of language, and questioning assumptions in order to broaden his worldview, and accommodate multiple perspectives.

Reflecting on his time at Seattle U, David has the following advice for current English majors: “Get involved in the wider Seattle community, literary or otherwise, by attending events and gaining internship experience. Your professors are excellent resources and often have valuable connections in the city that can help you build a bridge from university to the working world. In short, office hours can be for more than just discussing your assignments.”

Focusing on the future, David would like to pursue his Master’s degree, and seek out more creative projects and collaborations.