Letter from the Chair --

Hello! Prompted by the many exciting initiatives and accomplishments in our department, Seattle University's Department of Criminal Justice has decided to launch our first-ever Seattle University Department of Criminal Justice E-Newsletter. Published twice annually Summer/Fall and Winter/Spring (it will alternate with our graduate program E-Newsletter releases in Fall/Winter and Spring/Summer) we will be sharing quarterly news updates about departmental goings on.

This past year has been particularly exciting for our department thanks to an unprecedented number of research grant awards and donations. These funds will  enhance our capacity to engage students at both the undergraduate and graduate levels in criminal justice research and service while continuing to grow our programs and launch new initiatives. Our students are finding employment, specifically with agencies on which they set their sights years ago. They have worked hard to complete their academic requirements, obtaining internship and research experience to support their career goals, and we are excited to celebrate their many accomplishments. When I go downtown, I can barely walk a few steps before I bump into a former graduate who is now working in the criminal justice field as a law enforcement officer, community corrections officer, defense attorney, prosecutor, crime analyst, victim advocate, you name it! Every one of these encounters reinforces my belief that Seattle University is the best Criminal Justice Department in the west and one of the best there is in terms of educating students to create powerful and positive change in the criminal justice system. I am excited to be able to regularly feature all that our department is doing in the community to create a safer, more hopeful, just, and humane world. 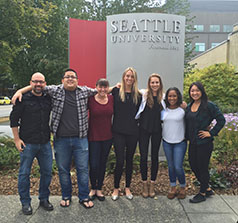 Of the many current applied research projects, Seattle U’s Department of Criminal Justice is excited to share with you the ongoing collaboration with the Seattle Police Department to evaluate the Seattle Police Micro-Community Policing Plans. The SUCJ-SPD collaboration is described in detail on the Seattle Police Department website: http://www.seattle.gov/seattle-police-department/mcpp. This collaboration is a two-year study of the SPD MCPP initiative which was implemented in 2014 by SPD Chief Kathleen O’Toole. SU CJ Department Chair Dr. Jacqueline Helfgott and fellow faculty Dr. Will Parkin head the research which began in 2014 -- projected evaluation completion slated for the end of 2016 -- with plans to continue the MCPP initiative in phase II of the project, pending funding. Under the MCPP, community residents work in partnership with their local precinct captain and Community Policing Team to identify problems, analyze existing quality of life and crime data, and design individualized plans to reduce and prevent crime. As part of the MCPP, SPD partnered with Seattle University to evaluate the initiative which includes conducting focus groups throughout the city as wells as the development and administration of a micro community level survey -- the first of its kind -- to gain a better understanding of the degree to which people feel safe in their communities and what influences their safety perceptions. 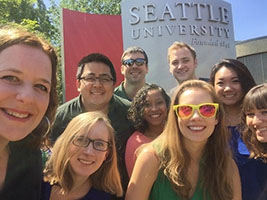 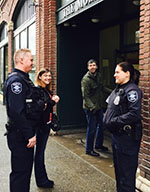 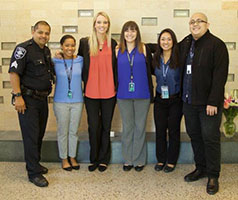 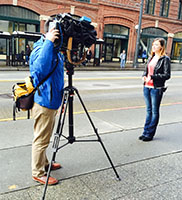 This collaboration provides an exciting opportunity for students to work as “embedded researchers,” simultaneously offering an extraordinary learning and research opportunity while at the same time providing a service to the Seattle Police Department and the community. As of this writing, two of the SPD MCPP RAs have been hired full-time with Seattle Police as an officer (Matt Thomas) and a Crime Analyst in the Data Driven Unit (Karmen Schuur). Additionally, the SPD MCPP initiative has entailed working with the SPD Data Driven Unit, creating opportunities for students to interface with other SU CJ students hired full time with the SPD data driven unit (Gloria Lara). The number of SU CJ students and alums working at SPD continues to grow. Many thanks to SPD Chief Kathleen O’Toole, Assistant Chief Carmen Best, Lieutenant Adrian Diaz (pictured above with current SPD MCPP RAs), and the many SPD personnel who have worked with SUCJ on this project.

For more information on the SPD MCPP go to:

The Center for the Study of Crime and Justice

Our department's Center for the Study of Crime and Justice (CSCJ) brings together researchers, academics, and criminal justice professionals involved in the study of crime and justice to collaborate on research, continuing education and training, service initiatives, and public events. We will be featuring ongoing collaborative initiatives and progress of the CSCJ in future newsletters, but for now would like to share some of the many projects in which our department has been involved through the CSCJ: 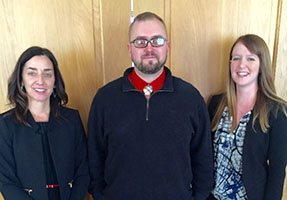 Evaluation of the Effects of Guardian-Oriented Law Enforcement Training: Emily Malterud (MACJ) is employed as a Research Assistant working with Drs. Helfgott and Hickman on a study evaluating the effects of the guardian training at the Washington State Criminal Justice Training Commission. Emily's is work at WSCJTC in Burien involves administering pre- and post-survey instruments to Basic Law Enforcement Academy cohorts and conducting follow-up surveys and interviews as part of an ongoing longitudinal study of the guardian elements of the WSCJTC training curriculum.

Retired Special Agent in Charge of Seattle Field Division, Bureau of Alcohol, Tobacco, Firearms and Explosives (ATF), Kelvin Crenshaw hosted an informal discussion attended by students and interested SU community members on August 9th, 2016. In addition to his professional experience with the ATF, Kelvin Crenshaw has been a member of the National Organization of Black Law Enforcement Executives (NOBLE) for more than 20 years, as well as a member of the Criminal Justice Advisory Board for the past decade. The discussion was an informal precursor to a more formal event, "Shared Dialogue on Policing & Protest in the United States" on October 11, 2016 in Pigott Auditorium.

The Blume Criminal Justice Scholars Program. 250K was generously donated by Ann and Bruce Blume to fund student scholarships as well as an endowment that will support scholars in perpetuity. The Blumes awarded the Seattle University Department of Criminal Justice this generous fund to further important research, practice, and service at the intersection of criminal justice and mental health. 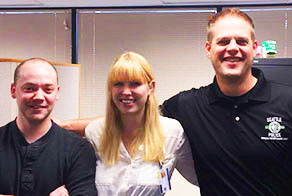 Our department will award the Blume Criminal Justice Scholarship to two students annually -- $2500 will go to one undergraduate and one graduate student who will also serve as student members of our department's advisory committee for the the 2016-17 academic year. We are proud to announce that our 2016-17 Blume Criminal Justice Scholars are Ellary Collins (BACJ, Forensic Psychology) and Brook Bray (MACJ)! Ellary just completed an internship with the Seattle Police Department's Crisis Intervention Team Coordinator, Sgt. Dan Nelson (pictured to the right of Collins). 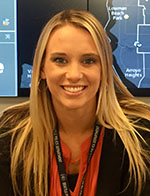 Brooke is a research assistant with the Seattle Police Micro-Community Policing Plans Initiative in the South Precinct. In addition to her MCPP involvement, Brooke has served as an intern for Dr. Richard Adler, Forensic & Clinical Psychiatry; completed a neuropsychology internship; and is currently completing her Master's thesis on Crisis Intervention in law enforcement.

Ellary and Brooke were selected from a competitive group of student nominees based on both their contributions as well as their potential to continue to make an impact to advances at the intersection of criminal justice and mental health. Ellary's and Brooke's names will be placed on an ongoing list of Blume Criminal Justice Scholars and will serve on our department's advisory committee as the 2016-17 Blume Scholars.

A warm THANK YOU to the Blumes and Helenkamps -- The faculty and students of the Seattle University Department of Criminal Justice will work hard to further the goals of the Blume Criminal Justice Scholarship and to honor the legacy of Lieutenant Helenkamp! 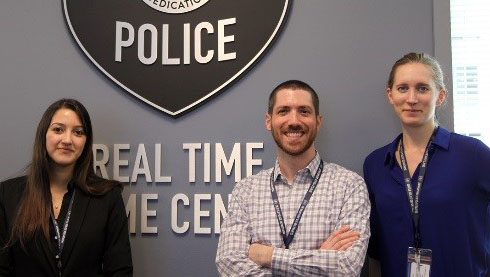 Keeping up with all of our graduates securing criminal justice positions becomes more difficult every day. With this newsletter we will begin to feature students who have obtained employment in the criminal justice field. In recent months, several of our students have been hired for full-time positions with the Seattle Police Department: Graduates Matt Thomas (MACJ ’16), pictured on the left, and Josh McLeod (MACJ '15), pictured to the right, were hired as officers. Current students Gloria Lara and Karmen Schuur, pictured above with Lead Crime Analyst, Mark Bridge, landed positions as data analysts in the Seattle Police Department’s Data Driven Unit. Congrats to Matt, Gloria, Josh, and Karmen who are taking advantage of the many opportunities provided by Seattle University Criminal Justice.

If we missed anyone else recently hired by SPD or other agencies, please let us know so we can share the news in future newsletters!

Dr. Matthew Hickman elected President of the Western Society of Criminology and Hot Off The Press new book Policing in the 21st Century! 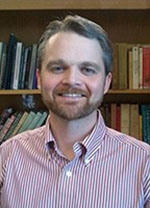 Our own Dr. Matthew Hickman has been elected 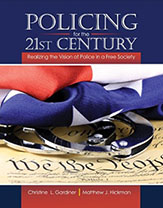 President of the Western Society of Criminology for 2016-2018!

In addition to assuming his new duties with the Western Society of Criminology, Dr. Hickman found time in his busy schedule to publish a new book – hot off the press: Policing in the 21st Century with Kendall-Hunt Publishing!

With our department's active role in the WSC this year (in addition to Pres. Hickman and co-editors Gunnison and Helfgott, Drs. Stephen K. Rice and John Vinson will be serving as WSC Board Members!) we hope to have a large group of students and faculty presenting at/attending the WSC Annual Conference which will be held this year in Las Vegas February 9-11, 2017. Deadline to submit abstracts is October 7, 2017! 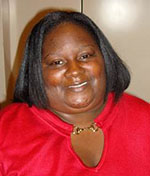 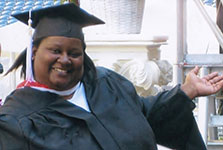 Sadora Anderson (BACJ 2006 and MACJ 2011) passed away suddenly in late August. Sadora was an undergraduate and graduate student in the Department of Criminal Justice and worked as a court clerk for King County District Court. Sadora completed her Master’s thesis “Factors Leading to Drug Addiction and Drug Trafficking as Well as Gender and Racial Specific Factors Which Contribute to Addictive and Trafficking Behaviors” in 2011, working very closely on the project for several years with her thesis chair Dr. Elaine Gunnison. 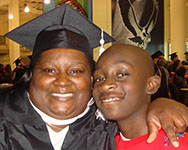 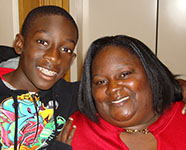 Sadora has two sons, Jordan who will be going to college at Western WA University this fall and four-year old Jamil. While she was an undergraduate and then a graduate student in our department Sadora would bring her son Jordan with her to classes, to her thesis defense, and finally to her graduation. It is clear how proud Jordan was of his mom. Sadora was adored by the CJ faculty and her fellow students many of whom she remained friends with over the years. She was a remarkable role model, a warm, funny, bold, and kind person, and one of the hardest working people this department has known. Her death is a great loss to her children, her family, Seattle University Criminal Justice, the criminal justice community, and the world.