As I type this it is grey and raining and mid-40’s, very typical for Seattle this time of year.  It’s hard to believe that just a few weeks ago I was standing barefoot in the sand on the beaches of Hawaii (and missing most of the ‘Snowmageddon’ that was going on here), in-between the panel sessions at the annual Western Society of Criminology conference.  SU criminal justice had very good representation there, with several faculty and students presenting papers.

A highlight for me was running into one of our Master’s program graduates, who is presently in a top Doctoral program pursuing her Ph.D. in criminal justice.  She reported that our MA program provided her with excellent preparation for her doctoral studies; in fact, her institution allowed several of our MA courses to transfer in toward her degree program, and in many cases our course content exceeded that of their own!  We’ve heard similar feedback from other former students who have gone on to advanced degree programs as well as to various sectors of employment.  This is very reaffirming for your faculty because we do believe strongly in the academic rigor of all our programs, and this kind of feedback is important to making sure that our students are adequately prepared for their next steps in life, whatever they may be.

I’m looking forward to the final quarter of the academic year, and maybe getting a little break during the summer.  Be sure to look out for Dr. Brooke Gialopsos, our newest faculty member, who will be teaching a couple classes this summer and then starting full-time this Fall.

Past and Upcoming Conferences

SU criminal justice had good representation at the WSC conference and presented on a variety of topics including:

This upcoming Congress is especially significant for SU criminal justice, as current students will be presenting!

We are holding a “practice” presentation session on May 24 3-6PM in the Boeing Room in the Lemieux Library.   We have a large group of undergrad and grad students, faculty, and advisory committee members who will be presenting at the International Academy of Law and Mental Health Congress in Rome.

Special thanks to Professor/ Judge Bonnie Glenn and Professor Allister O’Brien for their contributions! 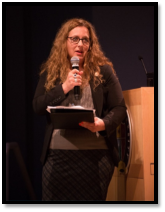 As we move into Spring quarter the Crime & Justice Research Center (CJRC) is in full swing for the 2018-19 academic year. We have new and ongoing collaborative research projects that have brought in grants to support paid research assistantship positions for students and recently submitted a proposals to bring in a new major grant on firearms violence (fingers crossed!).

On the continuing education front, this year the CJRC sponsored two events – a public event featuring Corey Pegues, author of Once a Cop: The Streets, the Law, Two Worlds, One Man, and we have a highly anticipated upcoming event on May 10th featuring Dr. Philip Jenkins, Distinguished Professor of History at Baylor University who has authored over 25 books, many of which focus on the history of moral panic and the ways in which moral panic drives criminal justice policy and practice. If you are not familiar with Dr. Jenkins’ work on moral panic, it will be well worth your time to look up his work so you are aware of this incredible opportunity to participate in an all-day continuing education event with him.

Last but not least, there are two paid graduate research analyst positions opening up with the Seattle Police Department’s Micro-Community Policing Plans. If you are interested, see the notice that went out via email and contact me asap at jhelfgot@seattleu.edu.

Seattle University’s Criminal Justice Department has received a $300,000 grant from the Joyce Foundation to conduct a research project, “Building the Data Infrastructure to Support Democratic Policing,” in Dane County, Wisconsin. The project, conducted through the department’s Crime and Justice Research Center, seeks to address a long-standing problem for law enforcement in a democracy: the police and the communities they serve struggle to engage in civil discourse about police use of force

The Joyce Foundation is a nonpartisan private foundation that invests in public policies and strategies to advance racial equity and economic mobility for the next generation in the Great Lakes region. The foundation supports policy research, development, and advocacy in five areas: Education & Economic Mobility, Environment, Gun Violence Prevention & Justice Reform, Democracy, and Culture. Joyce focuses its grant making in Illinois, Indiana, Michigan, Minnesota, Ohio, and Wisconsin, and partners with funders to explore promising policy solutions in other states or at the federal level.

The project, to be conducted during 2019, is based in Dane County, as the Joyce Foundation serves the Great Lakes region. In addition to faculty researchers, the project will hire up to five Criminal Justice students to help with data coding, analysis, and report writing. 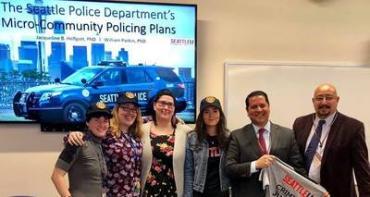 On March 1, 2019, we hosted a fifth cohort of Mexican Police and Internal Affairs personnel from the Boston College Global Leadership Institute for a presentation of the SPD MCPP (Seattle Police Department Micro-Community Policing Plans).  Dr. Jacqueline Helfgott has presented to each cohort and many MCPP Research Assistants have participated and been involved as well.  The groups have involved very interesting discussion and opportunity to dialogue about the differences between community policing in Seattle/US and Mexico. 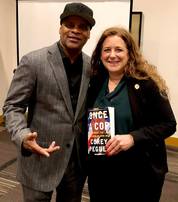 On February 28th, the Crime & Justice Research Center hosted an event with featured speaker and author Corey Pegues.  Corey spoke about his personal life--from selling drugs in Queens, New York; to joining the New York City Police Academy; and ultimately becoming an NYPD executive.  There were also several virtual attendees, as the Department offered a live-stream of the event.  (Apologies for technical / audio difficulties!) 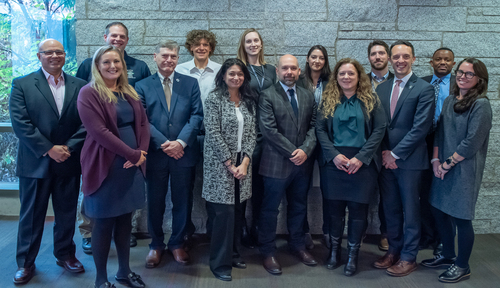 On October 25, 2018, Crime and Justice Research Center Director Dr. Jackie Helfgott, alongside principal authors Dr. Will Parkin and Christopher Fisher, reported the findings of their newly published report Trends in Misdemeanor Arrests, Referrals, & Charges in Seattle.  The Seattle report is part of a multi-site release of findings on misdemeanor arrests in the United States made possible through a 3-year grant from the Laura and John Arnold Foundation to John Jay College of Criminal Justice. 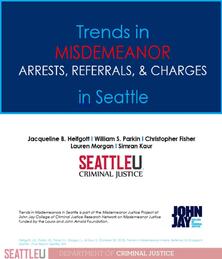 More information on the Research Network on Misdemeanor Justice

Physical copies of the reports are available! 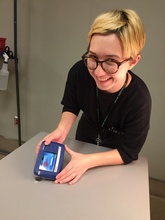 Megan Slavich (pictured at right) In addition to her studies, Megan has been working as a Drug Surveillance Research Assistant in the King County Medical Examiner’s Office.  Megan is a senior CJ student specializing in the Bachelor of Science Forensic Science major.

Criminal Justice Club
Last quarter, the SU Criminal Justice Club put their forensic science knowledge to the test at FLEE Escape Rooms. The club was nearly able to escape the bio-hazardous laboratory before it filled with (unconfirmed) toxic chemicals, but learned a lot about teamwork and problem solving in the process. 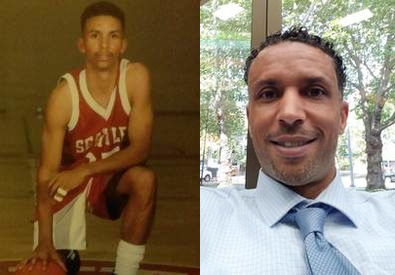 Mack Junior, BCJ, 1999, Mack Junior was a criminal justice student member of Seattle University Men’s Basketball team from 1995-1999.  In the twenty years since his graduation, he established a professional career in criminal justice and to this day remains playing basketball at a high-level.  He remains in the record books for Seattle University Men’s Basketball and averaged an impressive 13.3 points per game over the course of his career! 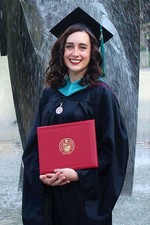 Emily Malterud, MACJ, 2017, Emily started with Everett PD as their Crime Analyst on February 11th, 2019.  Emily is assigned to the Investigations Unit focusing on Property Crimes, Financial Crimes, and Special Assault Crimes. She also serves as the North Precinct Analyst and works with their command staff to identify trends geographically based on precinct. 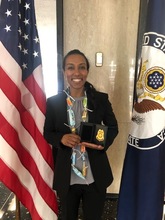 Kidst Messelu -  Kidst left Seattle University for Washington D.C. to begin training with the State Department for a diplomatic future in the Foreign Service.  Pictured right, Kidst at graduation.

Toshiko Grace Hasegawa, Criminal Justice and Spanish, 2010, was appointed executive director of Washington State Commission on Asian and Pacific American Affairs. She is a current MACJ student. Read the full story in the Arts and Sciences news feed. 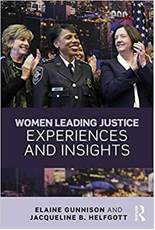 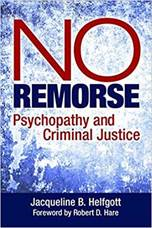 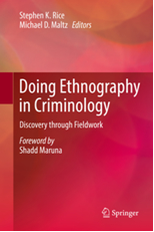 At this event, Dr. Philip Jenkins provides an in-depth look at how fear, panic and group mentality impact criminal justice and our sociological understanding of the world around us. 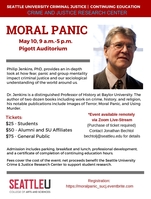 Dr. Philip Jenkins is a distinguished Professor of History at Baylor University. The author of over 25 books, many of his works focus on the history of moral panic and the ways in which moral panic drives criminal justice policy and practice. His notable publications include Images of Terror, Moral Panic, and Using Murder.

If you are not familiar with Dr. Jenkins’ work on moral panic, it will be well  worth your time to look up his work so you are aware of this incredible opportunity to participate in an all-day continuing education book with him. His book Moral Panic: Changing Conceptions of the Child Molester in Modern America is required reading for all SU-CJ Master of Arts in Criminal Justice students, and his book Using Murder: The Social Construction of Serial Homicide is one of the best books ever written on history of the moral panic over serial murder and the impact on criminal justice policy and practice. 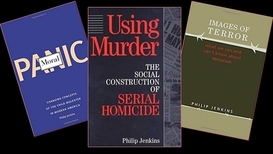 Some of Dr. Jenkins other works include books focusing on historical and contemporary issues that have impacted criminal justice policy and practice such as synthetic drugs (Synthetic Panics: The Symbolic Politics of Designer Drugs), terrorism (Images of Terror: What we can and can’t know about Terrorism), Internet Pornography (Beyond Tolerance: Child Pornography Online), and sexual Abuse among clergy in (Pedophiles and Priests: Anatomy of a Contemporary Crisis).

Our annual continuing education event is a highlight of the academic year that brings together students, faculty, advisory committee members, criminal justice and social service professionals, and the general public in a one-day learning environment. The nominal cost covers continental breakfast, lunch, an 8-hour continuing education certificate and the opportunity to gather, learn, and network.

Choose "Criminal Justice Program Fund" in the drop down menu and enter "Crime and Justice Center" in the "Comments" field.