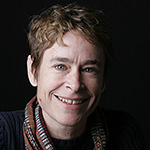 Documenting the City, One Frame at a Time

Garoutte, who came to photography after meeting a Mauritanian photojournalist in college, published her first book, “Matter of Trust,” in 1996. She was working as the house photographer for glass artist Dale Chihuly when her passion for art and culture led her to Cuba. There she documented Afro-Cuban rituals, taking 67 rolls of film on the first day of the photo shoot, and later published a second book “Crossing the Water: A Path to the Afro-Cuban Spirit World.”

After an 8-year stint as education director at Photographic Center Northwest, she joined the faculty in the College of Arts and Sciences. Hired to develop a BFA in photography, Garoutte brings the same passion to her teaching as she does to her art. Today, her students eagerly follow in her footsteps.

Little Saigon, a neighborhood adjacent to campus, has been the economic and social center for Seattle’s Vietnamese population since the early 1980s. Last fall, the annual photo competition “EXPOSED: Little Saigon” offered cash prizes for winners in four categories: culture, spaces and places, food, and the marketplace. Four students joined Garoutte for two days, reviewed each other’s work, and then made their submissions.

When the awards were announced in December, junior Bridget Baker took prizes in the marketplace category, the Voters’ Choice Award, and an Artistic Excellence Award. First year student Taylor Spencer received awards in the food and marketplace categories as well as an Artistic Excellence Award. In addition, photographs by juniors Svetlana Blinderman and Felix Hidajat were chosen by jury to be included in the December exhibition.

Garoutte is now working with middle and high school students on year-round photo and video documentaries of the redevelopment of Yesler Terrace. This 561-unit public housing community, built between 1941 and 1943, sits on 30 acres close to campus. The redevelopment of Yesler Terrace will replace aging buildings with a mixed-income community that includes more than 3,000 energy efficient housing units, parks and open spaces, shops, and community centers. The $300 million redevelopment project will span 20 years. Construction is already underway, and residents will begin moving into new housing in 2014.

With the assistance of SU students, faculty, alumni, and staff, the students conduct interviews of residents and document construction and activities. Their work was showcased at a reception on August 12 and on King 5-TV.