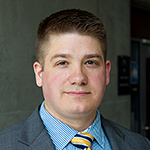 While riding along with police officers at 4 a.m., Loren Atherley heard the call to investigate a suicide. It’s all part of his job conducting research as the Senior Management Systems Analyst for the Seattle Police Department Compliance and Professional Standards Bureau.

After its report indicated that Seattle police officers routinely used excessive force, the U.S. Department of Justice entered into an agreement with the Seattle Police Department (SPD) to institute a series of reforms. The 76-page agreement addresses the areas of crisis intervention, use of force, stops and detention, bias-free policing, and supervision. MA Criminal Justice alum Loren Atherley ’10 provides data and analysis that track the department’s progress.

“The reform process is really important, and that’s the process I serve,” Atherley said from his office in SPD headquarters. “I compile qualitative and quantitative data to analyze our performance.”

Atherley’s analysis focuses on police organization and behavior. To determine how the department’s progress, he utilizes surveys, including community surveys, and numerical data, like calls for service. During a recent organizational assessment, he spent 15 ten-hour days riding along with officers in every precinct and on every watch, witnessing how they responded to calls that range from handling stray animals to investigating a suicide.

“What is really surprising to me is the emotional breadth of the job,” he said. “The officers are very competent professionals going about their work in a very deliberative and very compassionate way. At the end of each shift, we talked about how they’ve developed professionally and what the department can do to support them.”

Atherley has always worked in public service, beginning as an 11-year-old intern for the National Park Service. He did search-and-rescue for the Stevens County Sheriff throughout his high school years. A Political Science undergraduate at Seattle University, class of ‘07, he returned to the Park Service as a ranger during the summer.

“At the end of my political science coursework, I developed a passion for law enforcement,” he recalled. “It’s where the rubber meets the road – the interface between people who are there to serve and the people who need their service.”

Atherley chose to purse the MA in Criminal Justice with a specialization in investigative criminology. He interned in the investigative division of the Social Security Administration where he worked on Social Security and welfare fraud and identity theft. He spent a second internship with the King County Sheriff in its special operations unit where he was involved in a national child abduction case.

Atherley’s academic interest gravitated towards criminal psychopathy and police behavior. He took advantage of the opportunity to conduct research with Professor Matt Hickman that resulted in the publication of two articles: “Police Misconduct” in Police Quarterly (2013) and “Police Use of Force” in Policing (2014). He also wrote a section in Professor Helfgott’s book Criminal Psychology (Praeger, 2013) and gave a presentation on profiling psychopathic traits in serial sexual homicide at the International Conference on Law and Mental Health in Amsterdam in 2013. He plans to present a paper on “Justifying Violence: Primitive Defenses in Law Enforcement Use of Force” at the international law and mental health conference in Vienna next year.

Atherley credits his master’s degree and the particularly his research with faculty in putting him on his career path: “The work I did with Matt Hickman helped me get this job at SPD. I began to build a reputation as an expert in police use of force and police organization and that was really the extra leg up I needed to get this position.”