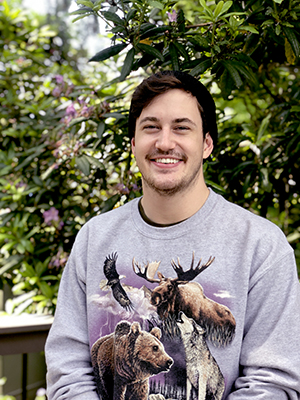 So can you begin by telling me about your honest project?

So the capstone project that I've decided to go with is doing a solo performance. I'm doing a 40 minute, one man show. It's called The Only Thing Worse You Could Have Told Me. I figured there was no better way to accumulate everything that I've learned at SU so far about performance, switching characters, and emotional direction than just doing a show where I get to play all of the characters. The longest solo I’ve ever done is like 10 minutes long, so this one is a really, really good challenge in development, depth, and stamina. It’s a 50 page monologue and just recently got it mostly all memorized. I'm also working with an outside director. Part of the whole process was finding the script, justifying the script, finding the director, paying the director, and getting the funds to make it all happen. And hopefully, this can be something that I can have under my belt after I graduate as well, to have this solo piece that I can bust out, be able to maybe pay some local artists to produce it, and help me get it up on its feet.

Why did you decide to do a one-man-show for your honor’s project?

It really came down to, I knew I wanted to do a performance of some type. When I applied for honors, and was told that I had to think of a project,  I knew right off the bat it was going to be a show, because I was like, “I'm here to be a performer”. I was hunting for scripts, searching for things about life, about love, about identity. I wanted to do something about queerness as well. That was like a big part of my formation SU was diving into that part of my identity and seeing if I can find a piece that worked that fit, that I felt justified breathing life into. I finally found this one clip of this one show by accident, which was crazy.  And I was like, “Oh my god, this is hysterical. “This is so funny. This is so beautiful. This is poetic. Where do I find more of this? What show is this?”.

I took a huge chance on it. And by the time I actually got the physical thing and read it, I was like, “Oh my gosh, it was meant to be, It's written in the stars”. It’s this beautiful explanation of the queer American landscape. Every single scene is a different character who's talking about a coming out story, and how different people from different walks of life reacted, responded, how it changed, how it didn't change. And what I love so much about it, and this was written in the late 80s, that so much of it was still extremely pertinent and relevant. And it maintains the sense of strength to it as well. None of these characters who happened to be queer identifying are sad and gay, you know, they're not weakened because of their characters. They have this beautiful sense of life. And on we go and continue to be persistent, and like, “here's what life is and how colorful and beautiful it is”. And that is what I was looking for. Because so much queer art or theater is about victimization, like “I'm sad because I'm gay” or “I'm struggling because my identity is my crush”. That's not really it at all. And I'm just blown away the piece by Dan Butler, who was actually used to be an actor on the show Frasier. This is a piece of someone's life at a critical moment, translated into a piece about strength and love and life and queerness. There's so many different stories that are told from so many different angles and perspectives that I just picked the ones that were really relevant to the times, to me, and also to the Seattle environment.

This is the last ballad I'm going to get to take on that stage as a student- this piece that means so much to me that came into my life, wrapped in this bow. And I'm working with a director that was my first director that I ever had actually at SU, Jane Nichols. The way that she directed just completely blew everything I knew about theatre coming out of high school, and she opened my eyes to this new way of discovering playfulness on stage. That's why they call it a play, it's not meant to be taken seriously. It's meant for you to be having fun. Because if we're not having fun, how are you expecting anyone else watching it to have fun? So she brought this element of love and kindness and joy. So I feel very encouraged and loved by really everyone who's been with me in this process since day one.

Were you involved in any outside organizations during your time at SU?

I've done some student film work, and that actually led me to do my first professional film outside of school as well. I haven't done any theater outside of SU. Because I mean, this program was pretty demanding and the one time that I wanted to [work on theatre outside of campus] people reminded me, “If you're gonna spend that many hours doing a thing, why wouldn't you just do it at the school that you're paying for?” So I figured it would be in my best interest to run through the whole course of the program, you know, get my money's worth, do all of the shows that give me the experience that essentially is what I'm paying for. Right? Outside of that, I did have my first internship with an outside theatre company during ‘How to End Poverty’. I really thought that's what I wanted to do, socially active theater. But what I found in doing the shows here and doing all the opportunities is that the art that I want to make is a little bit more old fashioned. It's telling these stories that have been told 100 times. I mean, like the Cinderella story, for example, everybody's seen Cinderella, but the reason it stays alive is because people want to keep seeing stuff like that. We want to have our hearts wrapped in clovers and a lot of the work that I need to do now as a young performer needs to be practicing my emotional recall to give those stories to people. So in the last four years I’ve veered away from calling myself an actor and a theatre artist, but more of a storyteller, which is bound to my photography business as well.

So what was there like a class that's kind of pivotal in your learning that, that you really gravitated towards?

So it was actually the very first theatre class that I ever took here. It was Shawn Johnson's Design In The Theater. Now I don’t consider myself much of a designer. This class wasn't geared towards people who wanted to be designers, it was geared towards this idea of visual storytelling, architectural and biological storytelling. The way he talks about things…. everything is on the table. He has not made any decisions about anything that the students bring in. It was so inviting and so inspiring. He took all of our ideas and turned them into new cultivable things. He really kick-started my confidence as a creator, as someone who has ideas that deserve to be shared in any capacity.

What is some advice you would give to an incoming student in the theater program?

it's going to be in the in the vein of open mindedness: take your confidence and put it on the shelf and be ready to enter this space where everyone around you including the teacher is equal. If you are given anything that you disagree with, take that and put it on the shelf as well. Just take it all, absorb in everything you can, and then sit with it before you form an opinion about what's going on how that's going to work for you. Because being in class with someone who's too stubborn to let in the lesson, not only does this distract from you wanting to learn, but they're also stopping themselves from learning anything new. No one has to take anything at face value. All these professors, of course, have biases and an individual perspective on things. Just actively reflect with an open mind and then draw your own conclusions. When you feel like you're ready, find a place to test it out. You're never going to know if what you know is actually good until you can make it happen. And as we've mentioned, and as we know, if you ask you shall receive, so be patient. Take it all in, ruminate, and then ask when you're ready to try.

Also, consistency is a big one. Authenticity, I think, is the biggest thing that people respond to, because there's been a lot of stuff that I've asked for that I haven't gotten that I was like, you know, upset for a week. And then I was like, well, it's probably a good thing that I didn't have to do that. Also, every step in success, comes with a lesson in humility. And every denial comes with humility. And how the school has trained me to navigate a lot of these professional social spheres being that most of these faculty are working professionals in their field as well as teachers here...they know how the system operates. And they've brought that into this little world that we operate in. And there's a reason why they respond to certain things over others which has trained me immensely for being confident in my asks of the real world as well.

Do you have any plans after graduation yet?

I'm gonna stick around and for at least a year most likely two. I'm a TPS (Theatre Puget Sound) member now, So I get all these audition listings sent to my email. Nothing is off limits. You know, if it's going well, and I'm doing great, and I'm making enough money to get by, there's no reason to leave. I love it here. Eventually, New York, but we don't need to worry about that until we need to worry about that!