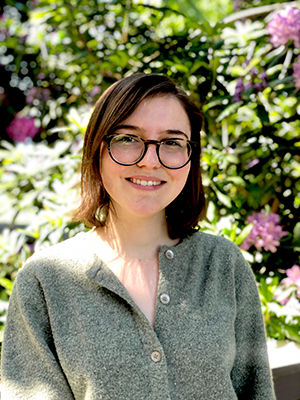 So can we begin by telling me about your project?

For the Honors Project, I'm doing a lecture-recital where I play a classical piece, which is going to be a Mozart Sonata and a Faure flute and piano fantasy. But in between and before playing,

I want to like give context to the music. The idea behind it [came from] a senior recital in January and I found in my experiences as an undergrad that a lot of my friends and people my age in general, if they're not familiar with classical music at all, they're intimidated by it or not that interested, because it's such a historically snooty thing. It's kind of a privilege thing too, like the only reason I play the piano is because my parents pay for my piano lessons, right? The idea is that in putting together a recital, first of all, it's short, which is part of the concept, and by giving a little bit of context of the music it lets people who might not be as familiar with classical music enjoy it a little more. [For example] if you go to a symphony the musicians walk on stage and they bow and play and there’s a lot of distance between the performer and the audience. And so the idea is to break the formality of it.

What are some of the ways that you're planning on breaking that mold?

Well, a big part of it is breaking the fourth wall. So it has the performer talking to the audience before playing, because there's the tradition, like I just said, of “you go up, don't say anything, you bow, you play, and leave the stage”. And so by just talking to the audience and sharing with them, like the history behind the piece, and a little bit about the composer...the composers were real people: there are always these interesting anecdotes that follow the music, reasons why they compose certain things, or what was happening in their life that influenced their music.

And also, talking a little bit more of the technical aspects of the music itself. I've been around a lot of musicians and sometimes there's this tendency to think that the audience isn't ready or doesn't want to hear about the more detailed, technical aspects, but I think when you introduce that you don't want to assume that your audience can't follow you. Because usually, they're actually interested in being given a deeper lens into what you're sharing with them.

Another thing is that if you give people a way in just by giving them more information, it makes it less about you and more about the whole experience. That's the other concept behind the project is that there's something lost when the performer, or whoever's the artist, doesn't think about their audience. And that happens a lot for pianists. You spend a lot of hours alone in a practice room, but the point of that is to eventually share that with others. It's really important to remember, [performing] is so much more than proving to people that you can do this thing. It's about actually sharing something meaningful.

So can you talk a little bit about your experience here at SU? Like, are there certain faculty members that have inspired you or classes that you've taken?

I knew that I wanted to go to a liberal arts school because I didn't really know what I wanted to do with my life. I was really into the idea of school...I just wanted to go to college and take as many classes in as many different fields as possible. So when I applied, I had to select a major and I picked English Lit because I always loved all my English classes in high school. [My reasoning was] “Okay, if I can't learn everything I can at least read about them”. But I really, really liked it. And then I knew that I wanted to keep taking piano lessons because I've been taking them since I was 11. And my parents are both professional musicians. So I grew up with it and wasn't ready to let go of it, so I just added the double major. And so that was really cool because I definitely considered auditioning and going to school to be a music major, but it never really materialized and so to come to SU,  I knew that if I came here, I would be able to develop relationships with  faculty members and students and actually know my professors and be able to talk in class. In the last two years, I’ve realized and been really grateful that I had been able to study both these things simultaneously.

So what advice would you have for an incoming student?

Go with your gut, totally. But my biggest piece of advice is to take advantage of the people who are around you when you're here, you know, never burn a bridge. Because you don't know when the people who've supported you in your undergrad education can help you as you make your next steps. There are just so many little things that you can do that can really help you in the long run, even if it's just going into office hours and like talking to your professors or, if they ask you for a favor, or just showing up...just the little things that you can do for other people. And then like later on, you'll be really grateful because they will want to help you because they got invested in what you're doing because you showed investment initially.

So what do you do outside of school? Like, are there any organizations that you've worked with?

Well, I'm a piano accompanist on the side. So I have a job at a church where I play on Saturdays and Sundays. That's another one of those things where like, just be open to all opportunities. And it's been really, really helpful these past few years, like paying for tuition. And like, I feel like if you ever work in any kind of religious-affiliated organization, you've learned a lot about people and you develop patience in ways that you might not elsewhere because faith is a very personal thing to people. It's interesting to be in that environment as a professional employee, but still being very much in that environment. So finding out where I fit it's really interesting.

[Also], last summer I worked at a music festival in upstate New York for middle and high school students. It was kind of like a band camp. But it was really cool because the faculty were musicians who, most of them, worked or taught in New York City. And so they would come in, stay at this camp for two months, really work with the kids. We had some really great musicians come in, so I got to hear some really good music. Other than that, the double major keeps me pretty busy!

So do you have any plans after graduation?

I just committed to getting my masters at NYU. It's called their Gallatin School of Individualized Study, a design your own master's program. And my concentration is going to be in English Lit Journalism and Music. A big part of the program that appealed to me is that I'd be able to continue to take lessons.