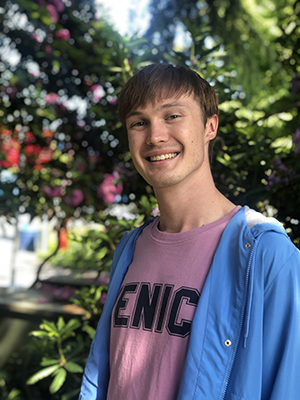 Will you describe your honors project for us?

The Honor’s Project was co-directing ‘Love and Information’, the mainstage show, and I directed the first act. And then one of my classmates, Brendan directed the second act, and we collaborated on a lot of it but had individual processes with the actors. We started working on it last summer and we had to do the normal honors proposal process. I think the main difference is that they usually don't have a lot of students direct on the main stage, and I think this is like the second or third time this has happened since Rosa has been here. And so the only reason that we got to do it as part of the main stage was because Rosa was gone in the winter. Normally you have to set something separate for your Honor’s Project. Logistically that wouldn't have worked, so we got to do a combined Honor’s Project. I think it went really well. Yeah, it was really fun. It was super quick, and so there wasn't even like time to be stressed or nervous about it. By the time that we actually started, it was like a month or two of meeting with designers and blocking and then it was the opening. So it was really, really fast, and really nice to watch. And I saw it a few times and the audiences seem to like it. And the performers seem to be having a good time, too.

Do you do anything outside of school? Are there any organizations you currently work with?

Most of my work is through Seattle University but I also do a lot of work with the Center for Community Engagement as well. I'm also working at Bailey Gatzert Elementary School. = Um, I'm also working at the Lambert House, which is the local LGBT Youth Community Center. I do as much art related stuff in those two places they can, but I don't do any theater programming with them. I've done stuff in the past with other theaters; I've stage-managed with Seattle Rep, Youth Theatre Northwest, and Upstart Crow Collective.

Will you talk about what about your experience at SU? Were there certain faculty members that really inspired you?

I've taken a class with almost every single theatre faculty. And ones I haven’t taken a class with I've gotten to work with on shows. I’ve learned something different from all of them and that has been really great. I’ve probably gotten to work the most with Rosa and Sean. I’ve also a scenic painter in the shop, so I get to collaborate with Sean & Bob a lot. And Rosa is my advisor and was also the advisor for this project. I definitely notice myself using a lot of the same vocabulary that they use a lot and that's been cool. Like, I'll say something and be like, “Oh, that's something I learned from this class” or someone said that in rehearsals or production meetings. Also, I think it's really nice that we have a smaller department and smaller number of faculty because I've gotten to work with all of them in some way and I've gotten to learn something from all of them, which is really nice.

What is some advice you would have for an incoming student? Especially in the theatre program?

You're in charge of your own experience and I think like that can be so scary because you're like a brand new ‘adult’. But I think it really is what you want to get out of it and you have to be really good at advocating for that. I think this program and the faculty here are really good at listening to you and giving you what you want, but no one can read your mind, you have to ask for it. And the earlier that you can get on that the better because then you can be like on a track and it's okay if you change your mind, but you just need to be in open communication with people and be willing to try anything, until that you find what you want to do... if you want to do one specific thing, but just  always being like, “This is what I want to do, this is what I want to work towards”.

Even if we don't offer a class in it, there's someone here that has done it or knows someone and hooks you up with it. I think it can be really easy to be like, “Oh, so-and-so knows what's best for me” or “My advisor will remember this”, but there are so many moving parts always that you really have to be on top of it. So if you're like, “Hey, I really want to assistant direct someday” and they're like, “Great!”, but a year goes by and it hasn't happened, so you have to remind people, really be an advocate for yourself. Don't just assume someone else is going to be in charge of that for you, which is hard to do. You know, to speak up and do that, but I think It’s important and how you're going to get what you want out of this program and also life. Especially in the arts, you really need to be an advocate for yourself.

Do you have any plans after graduation?

They’re tentative...I have applied to the Production Management Apprenticeship at Seattle Repertory Theatre Which is just like a year-long apprenticeship working with the production management team there. I haven't heard back yet!  Other than that, just finding some job to make money and continue to do art-related things whenever I can.

Do you have anything else you'd like to add about your piece or your time at Seattle U?

As much as I'm excited to not be in school, I really enjoyed [going here]. I've gotten a lot out of it.  It's a great program and hopefully, people know that and think that, too.